***This is a review specifically for the VR content of the game.  The value and review score I give to this title will reflect only that content***

Trackmania has been out for a while now but only received and update to include 40 VR levels and a couple modes in November.  This is not your standard driving fare as you are tasked with driving through literal hoops in a driving sim that is more stunting than racing at times. 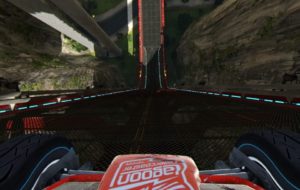 It doesn’t translate well to a picture, but what’s about to happen will amaze you in VR!

The VR missions are comprised of 4 differently themed stages, each with 10 tracks to race in as well as 2 modes to try these courses out in.  The first is campaign and that allows you to play and unlock successive tracks in each stage.  The second is arcade mode which is almost the exact same thing except you are only given a few tries to get a high score before you are forced to restart.  Campaign is the better way to enjoy this game, but if you are concerned with being and beating the best than arcade mode will give you that extra challenge.  The tracks themselves range from 15 to 60 second races with most being closer to the 30 second mark.  All of that may not sound like a lot of content, but that isn’t entirely the case.

While some tracks are super simple, requiring only a few turns to complete, others have you speed boosting your way up a half pipe only to launch across a gap to the half pipe on the other side.  Some of these levels are an absolute thrill in VR and I caught myself just laughing in pure joy at the driving insanity before me.  This game is meant to played in 3rd person (you can see your vehicle) and that really was disappointing but it is for good reason as it allows you to see a lot more of the track up ahead.  However, certain portions of certain tracks throw you behind the wheel for some intense on and off-road action.   Until you have driven through a full on loop in VR, it’s damn near impossible to describe.  I don’t get simsick, but if any game were to do it, I’d have to imagine it’s this one.  The transition from 3rd to 1st person is jarring and does take time to get used too.

The visuals themselves are not hyper realistic or crazy detailed, but what is here works.  The level designs get absolutely crazy and you will to focused on what’s next to admire the scenery around you.  Nothing here really detracts from the game.  Cars are definitely floaty, but given the nature of the game, that’s a must.  The variety in the stage details is much appreciated and each of the 4 sets of tracks sets themselves apart from the previous one.  Tire treads, ghost cars and other staples of the genre are all here, but level design is the standout.

The audio is also perfectly fine with all the right sound effects in the right places.  There are a whole bunch of audio tracks included in this game, but with most of the levels being so short, you never really get a chance to listen to any of them, which is a shame as there are some catchy tunes here.

Including multiple retries on a few levels I think I gold medaled all the courses in roughly an hour and half.  Once you gold medal everything there is very little draw in replaying most of the levels, though a few crazy standouts will have you trying them again, just for the fun of it.  You’ll clamour for more content and it’s just not available.  As most of the game is in 3rd person, playing the standard game in cinematic mode is a perfectly fine option and offers a tonne more content, but it’s not quite as good as the VR mode. 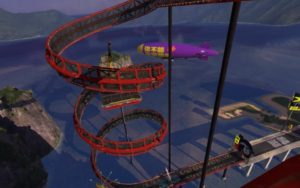 The level designs here can get absolutely insane!

Ultimately there is a lot of fun here, but if you are only purchasing this for the VR content, you’ll be left feeling wanting, especially for full asking price.  I had a blast playing this game but that lack of game modes in the VR content is disappointing.  Outside of VR are over 200 tracks as well as track building options and online play on custom and prebuilt levels.  All of that content is awesome and fun…and not in VR.  Even including a patch to play all the content in 3rd person VR would have made this a must purchase, even at full price.  That’s not the case though and what you are left with is a fun, albeit very short VR experience.

What would I pay? $20. Once again I will reiterate that this price is only for the VR content and if you are into insane driving sims(non-VR) than this is a must buy, even at full price.  There is a lot fun here, but with the short amount of VR content, wait for a sale.