Sports and VR seems to be a difficult combination to pull off when it comes to audience expectation.  We all want a simulation type experience akin to the AAA sport titles released out of VR but more often then not receive middling efforts that are quickly forgotten.  2MD is the next sport-sim to hit VR and while it may not have the NFL brand all over it, those looking for a taste of football in VR may be pleasantly surprised.  Forewarning on this one, I’m not a football fan so my sports terminology may be a tad off…you’re just going to have to deal with that. 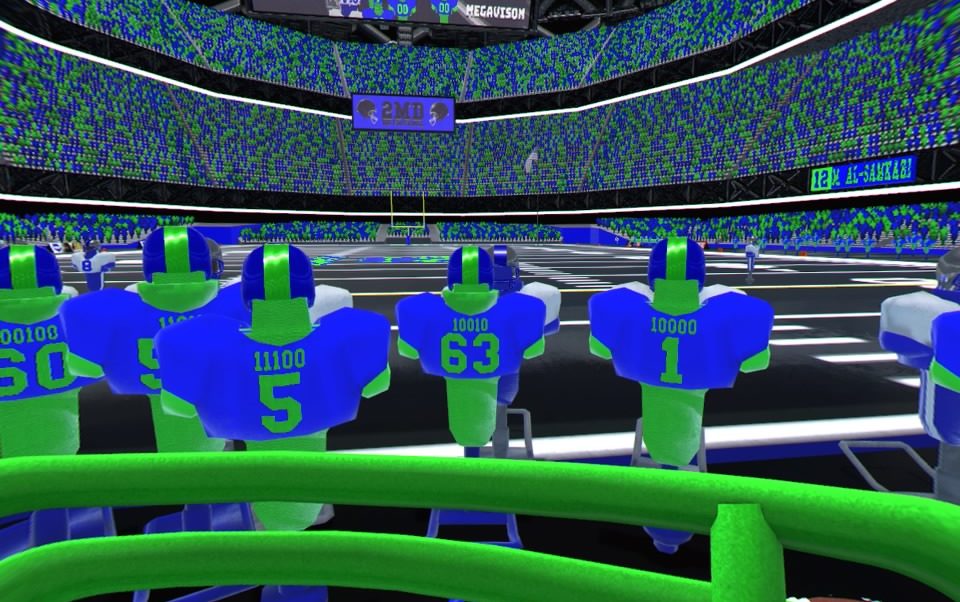 Once that ball is in your hands, you better act fast!

You play as the quarterback in a 2-minute drill (oh…I just got it!) and it’s up to you to not only get that ball to end zone but call and create plays as well.  The opening moments bring you through a relatively quick tutorial where you sit in the locker room as your coach tells you all of the games mechanics.  You’ve got 2 hands here so 2 Move controllers are a must to play.  2MD has a few pre-set plays you can choose from and you can create up to 8 customized plays which you can select on the field by button presses or voice commands.  You get to actually draw the lines on the play board with a marker you pick up, which is pretty sweet when you see those same lines on the field.  You can pick your team logo and colors, practice and view your trophies in the locker room but the bulk of the action is on the field. 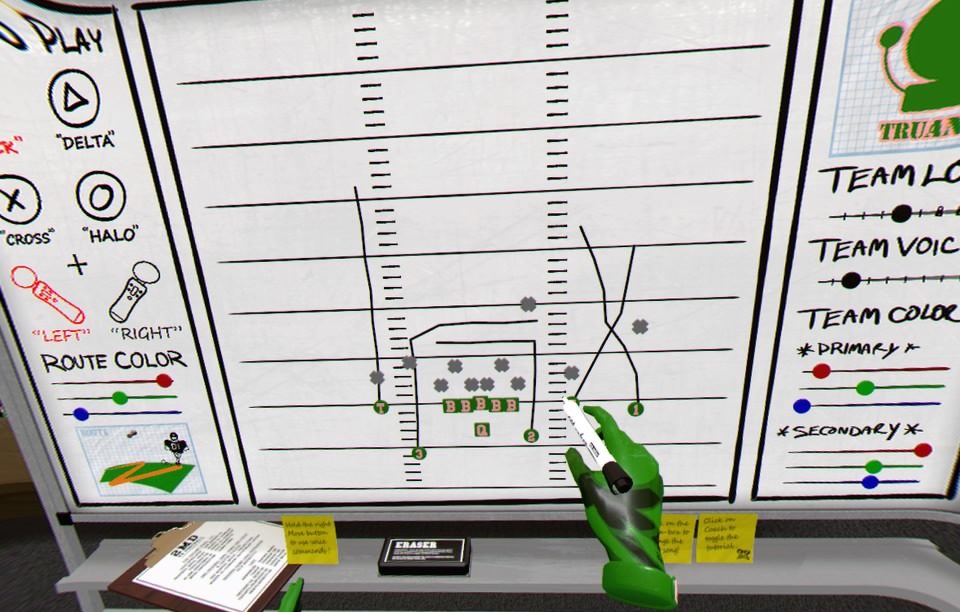 Making your own customized plays is sweet!

As the QB you pick your play, catch the hiked ball, find a receiver and toss it all in an attempt to get a touch down…should you see the opportunity you can also run the ball as well and stop tacklers with your free hand, though more often than not, I didn’t get to far.  The throwing physics are probably the best I have experience in any VR game to date.  My throws were so accurate I thought for sure there was a automatic ‘throw-assist’ option at play…a conversation with devs assured me that no such system exists.  I was making short passes and long bombs with pinpoint accuracy… and maybe some help from the player I tossed it to as they moved into position. This was hammered home when I felt myself overthrow or make a bad toss in the real-world, which ended up making for incompletes or interceptions in the game.  Hold the ball to long and you risk being tackled and seeing as how you only have 2 minutes of play-time, it’s best to think fast.

Truant Pixel decided to use tackle-dummies in football gear instead of fully animated players, which may disappoint some, but because of this, the game runs flawlessly.  Within moments of taking to the field, I forgot about that visual shortcoming and enjoyed the gameplay.  The stadiums carry a fair bit of detail with the stands loaded with cut-out tackle dummies, some mock advertisements and each of 8 stadiums has their own look that matches the home teams name.  Their is a broadcast screen at the end of the field which also showcases the action unfolding once the ball is in play and some specific objects (like a blimp or dragon) populate each stadium, making each feel unique.  Every player has a named jersey on and should you want you can customize the logo and color scheme to your liking.  Play lines where your players are going to run are easy to see and should you want, are also color customizable.  There’s also practice and bonus mode where you have to throw balls throw floating hoops to gain points.  Don’t miss and your ball will light on fire for MORE POINTS!!! 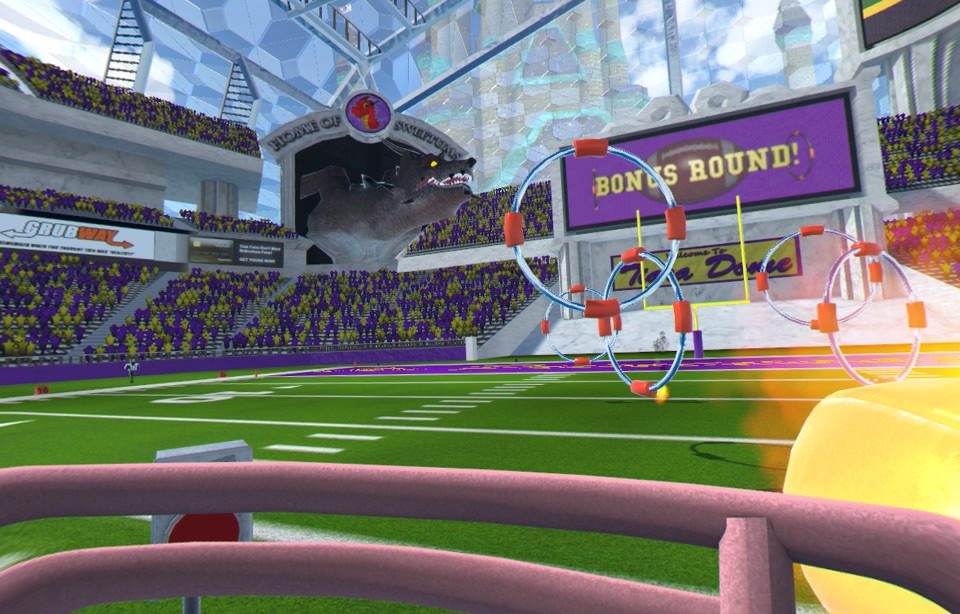 You know your on a role when your ball lights on fire!

The music in here is right out of any Sports sim and though generic, fits the game nicely.  Sound effects are on point with player collisions sounding lifelike, audience ‘oooo’s and ahhh’s peppering the game and few other effects which add to the realism.  You can customize your team’s voice so when the ball is hiked, or you switch plays on the field, you will hear whatever voice you picked shout out those commands. Those voices range from a typical male or female coach all the way to an unintelligible robot voice, which added some humor.  Should you choose you can also shout out the commands like ‘Triangle Left’ whereupon the players will adjust their position accordingly.

For what 2MD promises to bring to the table, there are very few flaws here.  With that said, the biggest flaw would be user expectation.  This is an indie made QB sim and each game is only 2 minutes so those looking for a “full” football game will just have to keep waiting.  The visuals are definitely on the simple side, but that’s to be expected given the budget nature of this title.  There are no seasons, or any kind of special play modes just start the campaign and proceed from stadium to stadium, crushing the opposition to unlock new teams, stadiums and fill up that trophy case. 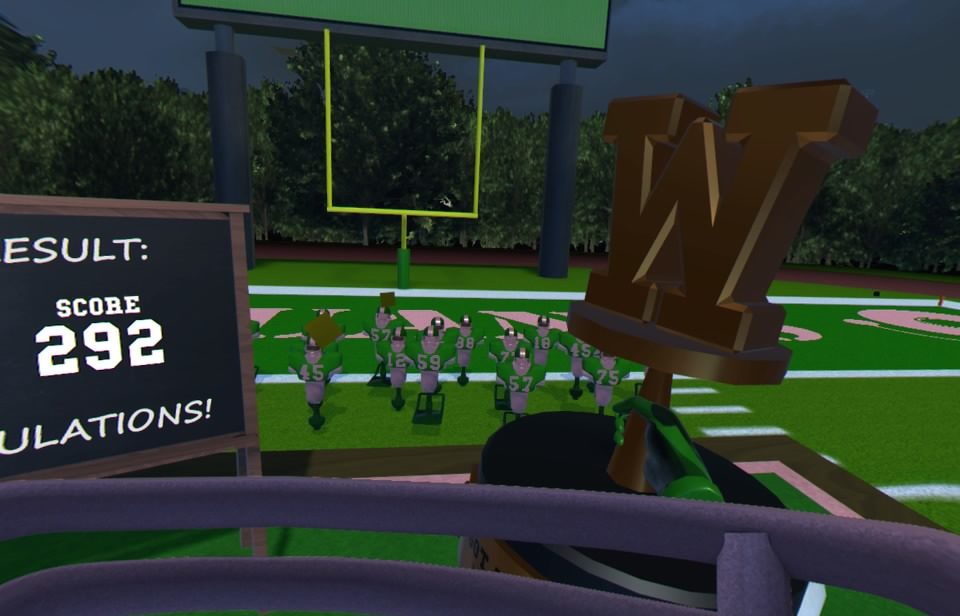 2MD Virtual Football may be a stripped-down version of a true American Football simulation, but Truant Pixel nailed the gameplay and physics to still make this one of the best sports sims I have played in VR.  It’s a blast to call the plays and watch the action play out while you pick your moment to toss the ball.  It’s only a single player title, and the campaign requires you to play through round after round against competent AI opponents, with each round culminating in a trophy should you win.  Online leader boards are here as well to see how you stack up against the rest of the world and the amount of customization options here is an absolute delight.  This may not be the full-fledged football sim like many want, but I challenge you to not have a great time while playing this.

What would I pay?  $13 is perfectly fine for this.  Amazing throwing physics, fully realized stadiums, a host of customization options and the bonus/practice modes make this little football game feel packed with content.  Like i said, I’m not even a football fan I had a tonne of fun playing this one!

Truant Pixel provided The VR Grid with  review code for this title and, regardless of this review, we thank them for that!