If you read my review for Drive Club VR (here) than you know that I fell in love with the Racing Genre because of VR.  My follow up review for this genre was Trackmania Turbo (here) which I also thoroughly enjoyed.  I have been clamouring for more VR racing content and the guys at Codemasters have done the PSVR community a solid and patched their whole game(kind of) for VR…much appreciated! 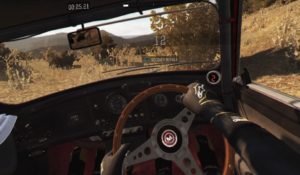 Notice how I you can’t see the road, that’s because it can be hard to stay on it.

However, the game itself is not for newbies, and I contest that even veterans of the genre may struggle with the real world controls and physics in this game.  I thought I knew what sim-racing games were, I was wrong.  Dirt Rally is unabashedly hardcore and just like in real life, once screw up in a race could spell doom for that run.   Added to that the lack of any real tutorial mode and you are in for an uphill battle.  With that said, if you invest your time, the pieces start to fall into place and you naturally just get better.

I only played with a DS4, like many of you I’m sure, and I found the controls to be tough, as they are supposed to be.  Traction, road conditions, speed and braking all play such pivotal roles that ignoring one will spell certain doom.  The key is practice and figuring out the exact timing needed for applying your turn, brake, e-brake and acceleration, but once you begin to figure those out, the fun begins as you start to conquer the tracks.

The game looks good, but does take a predictable hit in VR.  Levels can perodically look washed out and on occasion a turn may surprise you because you couldn’t tell which way to go.  Those problems can be magnified when weather conditions are in place as well, but once again, trial and error will get you through.  The tracks themselves carry a fair bit of detail and with the level of difficulty present, you’ll be so focused on the road to notice much else.  The weather effects here are some of the best I’ve seen and had me feeling like I was there, in that rainstorm, driving through puddles that temporarily block your view and having a blast the whole time.  It is worth noting that the VR patch only applies to gameplay content and any menus or cut scenes still appear to be in cinematic mode. 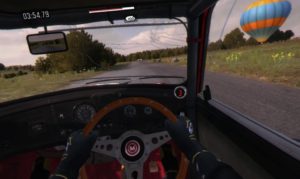 There are some cool sights to behold in this game, but you’ll be to focused on the road to take them in.

The audio as well is no slouch with some great ambient effects.  Taking a hard turn and hearing the dirt fly is actually kind of impressive along with hearing the localized effects of your car as it takes damage adds a tonne to the realism. The soundtrack as well is inoffensive with a few musical numbers that add to the intensity of the game, though they aren’t featured during gameplay.

Single player consists of Championship Mode, where you race on a series of tracks in an attempt to get the best time.  Unfortunately, damage incurred during each race carries over to the next, and although you can repair some of the damage between each race, take too much and you won’t be able to keep up with repairs.  This mode also swallows a lot of your time with little reward.  Unlocking new vehicles just took longer than I would like, though there is a custom race mode to assuage your longings and you can race in any vehicle to your hearts content and practice those courses to crush your next attempt at a championship.

The one big help is your navigator, who sits beside you in your car and tells you what is coming up ahead.  Without that guy, I would be doomed.  His instructions are detailed and come with enough notice to prepare you for what lies ahead.

There is a local multiplayer option available as well with a 2nd player becoming the navigator and in a pseudo-rhythm game sending you the proper or instructions based upon accurately timed prompts.  It’s a neat little addition to include those around you as you take turns playing the game. 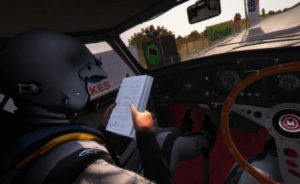 Lastly is the multiplayer, which more than likely will make you feel a little better about your race times as you compete against people’s times, not the computer.  It’s nice to see adjusted human scores.   There are time trials that feel the same as the single player content.  The standout is competitive racing where you face off against real people, have some conversation and maybe rear end someone and spin them out of control.  It’s great entertainment though be aware that there are some long time veterans online who will school you in the ways of rally racing.

Patience and practice are key here.  This is not your typical driving game, it is unapologetic with it’s difficulty and even embraces it.  Get better or quit playing, those are your only 2 options.  Once you begin to figure out the games subtleties though, there is a great sense of satisfaction in just making turns that only a few tries before spelled certain doom.  I honestly wished I had a force feedback wheel for this title as this is the kind of game that was built for one.

What would I pay?  $40US makes a little more sense to me.  If you love racing games than the full price is justifiable.  I actually have a slight issue with this being a full priced game PLUS an additional $12.99 for the VR patch, especially when that content doesn’t actually cover 100% of the game.