I’ll include the press release below but this experience sounds absolutely amazing and is being handled by a team that takes their historic & scientific content seriously.  With VR’s mainstream introduction last year I expected a flurry of experiences that would allow us to explore places and settings which would be otherwise impossible but for the technology.  I’ve been a little disheartened by the lack of these type of releases as the emphasis just seems to be more on the game side of things (which I still love). 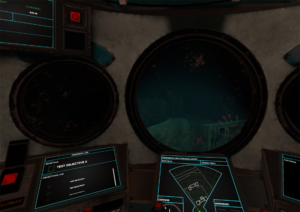 Immersive VR Education has already given us one of the more impressive virtual simulation games in ‘Apollo 11 VR'(review here) which allowed players to experience key moments in one of humanity’s most pivotal space missions. Now they have taken their next step with an adventure below the seas and have made an experience many have been dreaming about their entire lives.  Not only can you explore the submersed (slightly restored) Titanic, but they have also provided gameplay elements as well to spice things up.  This type of experience/game interaction makes what should be an amazing experience, even better and more immersive.

Add in future content taking us back the days of the original launch and this is sure to be the type of experience that draws many people to VR and showcases what can re-created using virtual reality.  Titanic VR is going to let us explore a piece of history like no other media has done before and I’m definitely looking forward to seeing how Immersive VR Education handles such an epic experience.

Immersive VR Education Ltd. have announced their educational experience/game, ‘Titanic VR’, will be released in the coming weeks. It will be playable on Desktop PC, Oculus Rift, HTC Vive, and PlayStation Virtual Reality headsets.

Diving to the bottom of the North Atlantic, the player takes on the role of Dr. Ethan Lynch, Associate Professor of Maritime Archaeology at the fictional University of Nova Scotia. With funding from a mysterious investor, Dr. Lynch and his PhD Candidate Jean Robinson have set out aboard a research vessel to dive the wreck and answer questions that have remained submerged for a century.

Complete bonus missions such as rescuing a lost ROV, creating a photo mosaic, placing research equipment, and working with a world-famous Director. Clean and preserve recovered artefacts, upgrade your ROV, and learn all there is to know about this infamous wreck.

“We’ve used comprehensive maps to create a realistic 3D model of the wreck site. We used motion capture, face-scanning technology and professional voice actors to immerse users in the story. We wanted to create an accurate portrayal of events so that it is not only educational, but also emotionally engaging.”       – David Whelan, CEO Immersive VR Education Ltd.

This educational experience is set in the near future, but explores a more-intact 1985 model of the wreck. Players will have an option to follow the storyline, or purely explore in a sandbox mode. This is a hands-on experience, with players required to navigate around and inside the wreck using their submersible and ROV. This experience is designed for room space, but is also suitable for sitting space, and monitor mode.

This is also the first released section of Titanic VR, with an animated 1912 experience being released later this year. In the 1912 animation, players will witness key events through the eyes of a survivor. It is a historically accurate recreation of events, based on eye-witness testimony and substantial research. Players will leave with a deeper understanding of this historic and tragic event.