Dark Times is the follow-up to 2018’s The Wizards which you puts you once again in the role of the Wizard Aurelius’s ward, tasked with defeating a new threat to the world of Meliora, The Umbra.  Dark Times looks to expand not only the mythos of this world but the number of spells you have, how you cast them and how you interact with the world around you. 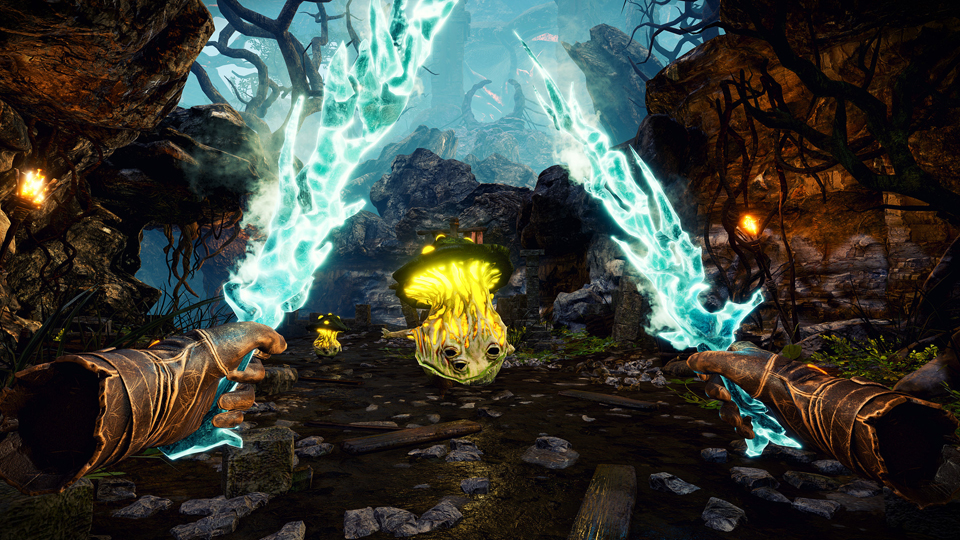 Fighting these guys with knives is a bad idea…trust me.

Like it’s predecessor, to cast spells, it’s about making specific gestures with one or both hands for a variety of spells, many of which return from the 1st game, but some additional ones expand upon the original spells, chaining together hand motions for some impressive results.  You can navigate the linear campaign with full locomotion or teleport and click-turn with a variety of options in the middle to accommodate any sim sickness you may have though I found the Mixed system to be the best as there are a few moments where I was stuck on geometry or couldn’t climb because of a higher step that forced me to use teleportation to navigate.  Speaking of climbing, that mechanic has now been added to this franchise and you’ll often find yourself scaling walls, climbing ropes or pulling yourself up or down magically created obstacles.  Where the first game was criticized for its clumsy aim mechanics with tossed fireballs often traveling in the wrong direction thrown, Dark Times now auto-aims your tosses with deadly accuracy ensuring you almost never miss your target.  That may sound like it makes the game easy, and it does in some respects, but enemy aggression and their accuracy has also been dramatically increased so you need to be on your toes as arrows and other projectiles begin to fly your way.  In fact, the shield ability was one I almost never used in the first game, but in here I almost never went without one being active just in case an errant shot came my way.  Besides just throwing fireballs, you can fire ice bows, wield ice blades, push enemies back with a burst of wind and many other spells centered around the elements.   At the time of this review there are no other modes besides the campaign though you can play in Story Mode, which removes any real difficulty or standard campaign which allows you to take much less damage and forces you to get good.   Game+, Hardcore, Arena and a survival mode are expected to be added by the end of 2020. 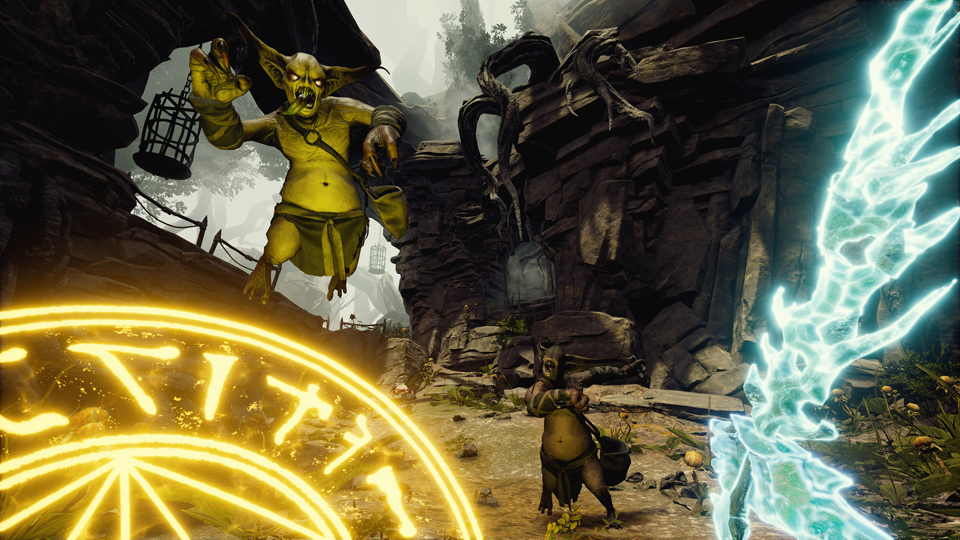 Always have a shield ready….always!

The world of Meloria falls in line with standard Fantasy tropes so you’ll be wandering through castle ruins, forests, and catacombs though this time around the world is much more fleshed out.  There is a noticeable increase in fidelity from the 1st title which sometimes looked washed out or had some rough looking characters and animations.  The world around you is beautiful and looks very authentic with the level of detail in just about everything looking AAA in quality.  Gone are the orcs, trolls and goblins from the 1st game, replaced now with corrupted elves and other fantastic creatures that breathe new life into this series.  Bosses wield their own magics your way launching magical daggers or using ice shields to protect themselves with most of these battles dramatically upping the challenge.   Lighting effects are top quality which is great as many sections of this game can be very dark, relying on your spells to help guide your way.  NPC’s come in all shapes and sizes, but the set pieces are the real treat here, especially when they get huge and magical, offering some unique visual moments that I don’t recall seeing in any game before this.  One odd choice is your ridiculously large HUB/home area which allows you to access previous stages as well as practice spells, but offers little else beyond that making almost completely unnecessary except as a change of scenery

The story is told exclusively through narration and brief conversations between Aurelius and a few of the enemies with some fantasy folky scores accompanying you on your journey.  When you encounter foes the music changes to an intense and upbeat track and once you have vanquished them all, returns to the regular sounds of nature, your footsteps, and the environment around you.  Those environmental sounds are quite impressive with almost every moment in the game having some really solid 3D audio which I noticed during the more quiet moments when all I could hear was the creaking of a rope bridge or the wind and rain blowing around me. 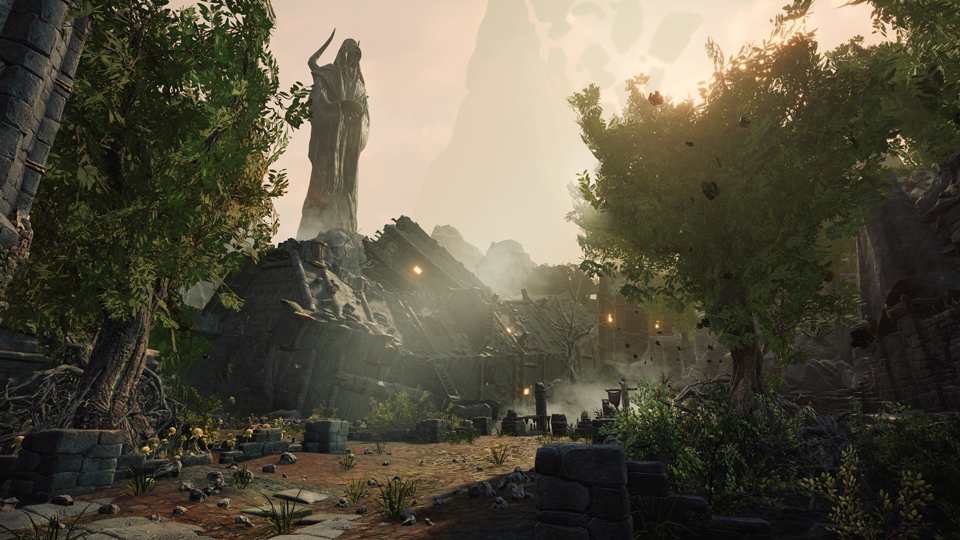 The set pieces are wonderful in here.

In almost every way, Dark Times is a bigger and better sequel but still suffers from a few issues.  The story was arguably the weakest point in the 1st game and unfortunately, that carries through to this as well as I really had no clue what I was doing beyond just killing baddies, unlocking more spells and moving forward.  Aurelius’s little tidbits of exposition offer the barest of motivations and while I did enjoy the 4-hour campaign thanks to the presentation and mechanics, I would have loved to have had a more in-depth narrative.  Beyond that are some minor gripes that really don’t detract too much from the game, but are worth mentioning, nonetheless.  The climbing mechanic is a welcome addition but the way your hands interact with what you are grabbing has them just floating and rotating in place and it honestly looks half-baked when you grab onto any climbable surface.  The mechanic works just fine (minus my next issue), I just wish it looked as good as the rest of the game does.  Whenever you move to close to or into the environmental geometry, your screen goes completely black, which I absolutely hate as it’s very easy to lose your bearings when that happens, especially when you are climbing around something, though actually colliding with the environment is a fairly rare occurrence.  Despite the increase in enemy abilities, minus the boss battles, I found the campaign to be fairly easy.   A harder mode is coming soon but I would love to see some difficulty options to make battles a little more challenging as once I learned to always have a shield ready, death rarely found me.  Beyond that negative stuff are some extra hidden chest scattered throughout the campaign which add to both the narrative or give you bonus items for your hub area.    I really did enjoy taking in all the splendor that the campaign offers.  It’s not the longest campaign out there, but it was very fun despite the shortcomings I mentioned above and overall, it felt like a giant step in the right direction to making this a cornerstone VR franchise. 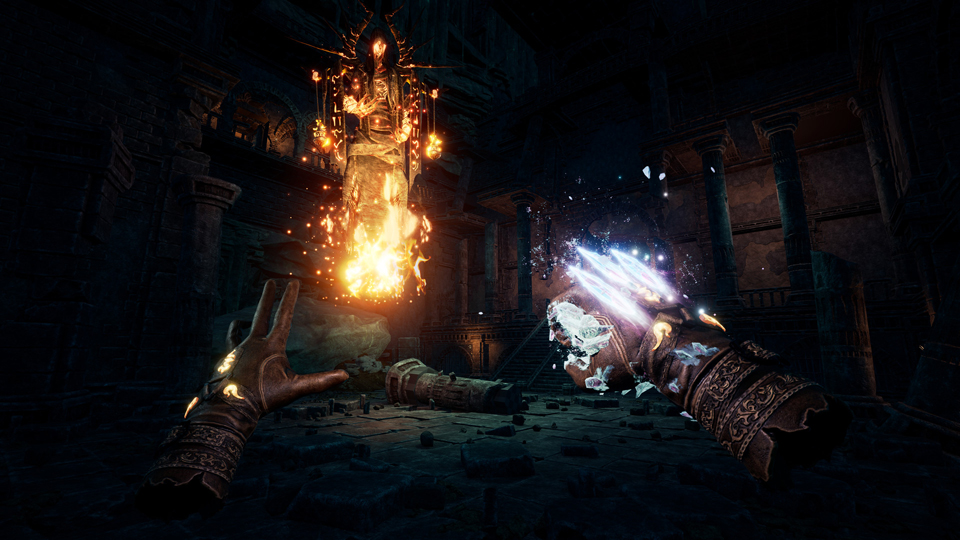 Fighting these guys gets very intense.

Like I said, this really does feel like a sequel in almost all the right ways.  The mechanics have been refined, the presentation is gorgeous, and campaign feels much improved over the first Wizards title.  If you are looking to get your Gandalf on, Dark Times makes you feel like an all-powerful mage that no one should mess with!

What would I pay?  Even if no content was being added, I think the $25 US asking price is great for this.  Content is being added making this a must own title for anyone who likes first-person fantasy adventures.