There aren’t a lot of Survival games available in VR, especially if you break it down into individual platforms with their being less then a few on either the PSVR or Quest headsets.  Enter Song in the smoke, where you play as a caveman (or woman) and are awoken by a three-headed crow at the edge of the woods, ​and must travel through eight stages including forests, valleys, and frozen terrain. 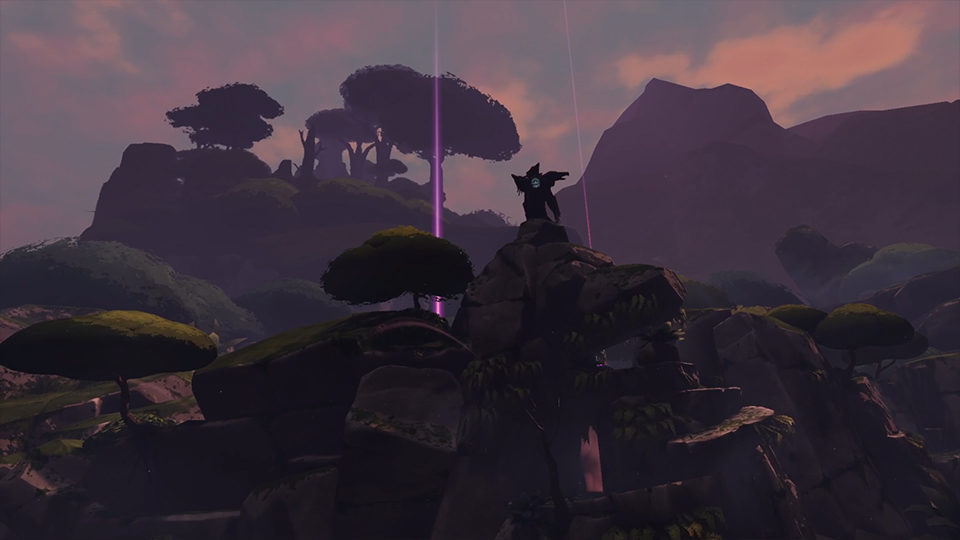 Your journey begins with the 3-headed raven guiding you through the world.

You are going to need a pair of tracked motion controllers for this one as you’ll be interacting with items and the environment constantly as you struggle to not just survive but thrive in this fantasy prehistoric world.  IT should be noted that other than the actual differences between PS controllers and PC/Quest counterparts, this controls largely the same on any platform with movement being relegated to pressing the left Move button for PSVR to walk and using that hand’s direction to steer while all other controllers just use the thumbsticks.   The opening stage acts as the tutorial, teaching you the basics by giving you a few key items to get you moving and teaching you how items can interact with each other.  Your cloak can store a set number of items, a mortar and pestle can be used to grind herbs found in the environment with bones, sticks and rocks being combined to create various tools and weapons.  You’ll have to stay warm which involves crafting clothes for yourself and making fires during the nighttime to stave off not just the cold, but the beasts (and more) that lurk in the darkness.  The world is broken up into 8 different sections with each one requiring you to find 3 glowing stones that will reveal the spirit blocking the path to the next stage.  Finding the stones are a task unto itself and developing those survival skills is paramount to your success. At your campfires you can create additional crafting stations that allow you to utilize the animals you kill for more than just food as you can create various articles of clothing that protect from animals and the elements as well as a storage sack, which will allow you to access to anything stored in the sack once you have made one near a new fire pit.  Each area only allows for 3 firepits and thankfully you have map on your chest that tracks any areas of interest.  Each stage appears to be rather small, but when you include the verticality of high clifftops and underground cave systems, it can be very easy to get lost, even if you are paying attention.  Killing animals is one way to get food with the other being to scavenge for berries and mushrooms that may grown in each area.  There is gauge on your wrist or in your cloak menu that shows your body temperature, health, fatigue & hunger and when you combine all the elements I have mentioned, plus the ones I haven’t, you get a game loaded with choices as to how you want to take on this dangerous world. 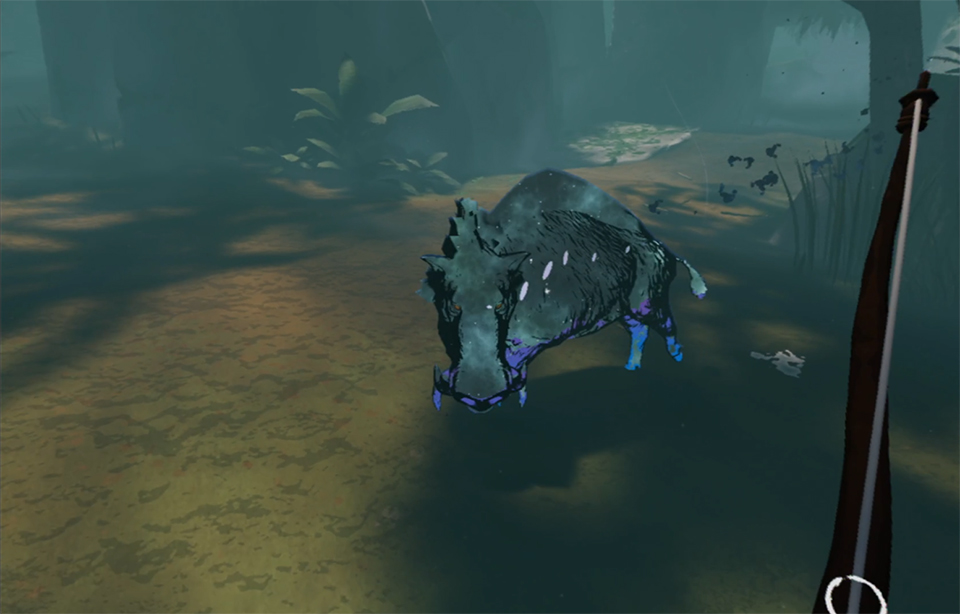 Killing the spirits of the forest is no easy task!

No matter which platform you play this on, Song in the Smoke impresses with its lengthy draw distance and comic book(esque) art style that lends itself wonderfully to VR.  The PC version is the clear winner in the visual department with the game being populated with the most environmental assets and jacked up resolution which has the game looking very crisp.  the Quest version on the other hand suffers a lot from a blander color palette and dramatic reduction in plant life and finer details, but considering the platform, what’s here is amazing as gameplay hasn’t been sacrificed at all.  PSVR lands somewhere in the middle, offering up similar visuals to the PC version, but still doesn’t quite have all the finer texture details and suffers from the lower resolution of the headset, but the art style used circumvents the PSVR’s shortcomings and no matter which platform you choose, the game still delivers the goods!  The worlds around you are typically lush and teeming with life with flocks of birds fleeing from the safety of a bush, massive trees that mask the sky, deer like creatures and other smaller wildlife disappearing into hiding places as well as flies, babbling brooks, waterfalls, mountains, and valley’s all making this feel like a very authentic natural environment.  With day and night cycles, the lighting changes accordingly bathing the environments in amber and pink hues in the morning while dusk brings darker blues and purples and should you be left in the dark, it is just that as you are essentially blind without a nearby fire source.  Animals move with natural grace and when a predator decides you are a tasty snack, it’s best to have a weapon on hand as you’ll have to parry and block their up-close and personal attacks.  When you crouch, you go into “hunter mode” which allows you to see the signs of passing animals and for extra sneaky goodness, moving into plants provides extra levels or cover which could be the difference between life and death if you find yourself being hunted.   It’s a beautiful game with fantastic artistic design that compliments the gameplay quite nicely. 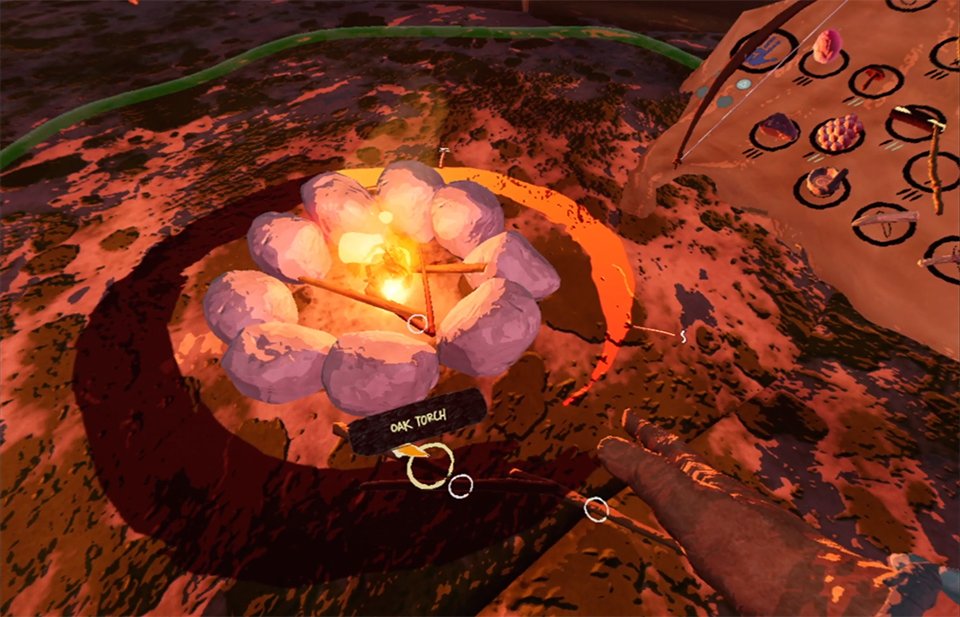 While relying on what you can see will be key to your survival, listening to the sounds around you could have you avoiding dire encounters or aid in the hunting of an animal.  Some light, ambient music may play in the background if you are close to a magical stone, but otherwise the game is bathed in musical silence letting the sounds of nature accompany you on your journey.  Your character will let the occasional noise, grunting in approval when he/she crafts a new item or enjoys a snack while letting out less than enthused noises when taking damage or bleeding out.  The sounds of your footsteps, the trampling of hooves on the ground, birds calling in the distance, a nearby stream, animal, or anything else nearby would make this an almost relaxing experience save for the fact that survival was always at the forefront of my thoughts and while the world looks and sounds beautiful, I never forgot about its dangers. 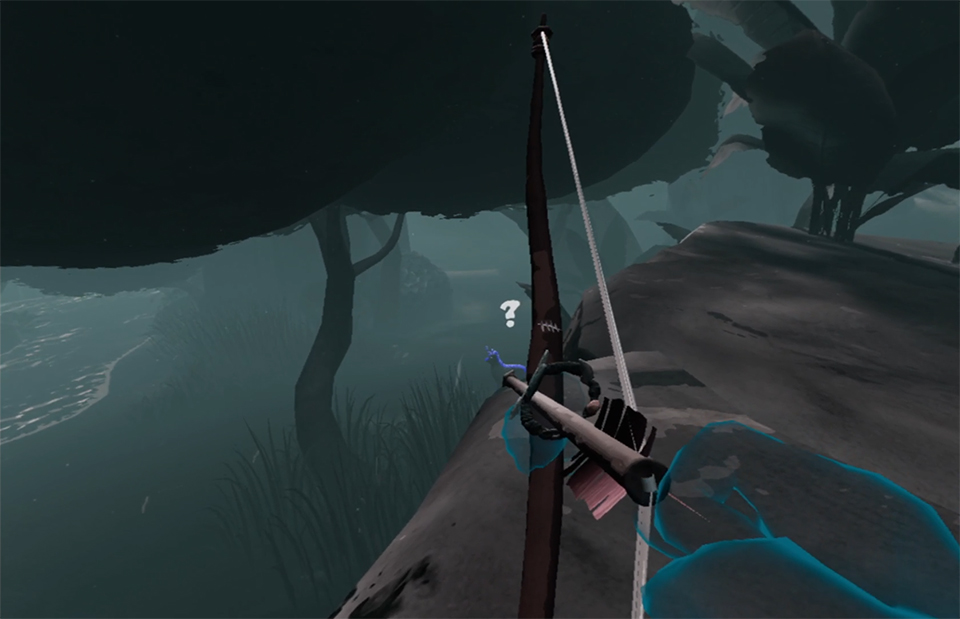 Stealthy kills are the best kills!

Song in the Smoke isn’t the most in-depth survival game which I think helps in me liking it so much but by no means is it a simple survival game falling somewhere in the middle of being casual and hardcore.   While the tutorial does explain the basics, it doesn’t explain everything, so you need to pay attention to your options and how the game mechanics work, especially when it comes to crafting.  Your firepits are your best friend so pay attention to your cloak menu as additional crafting options are available ONLY at your campsites.  Learning how each item is used is task unto itself as even placing items that can be combined, need to be lined up accurately so they can be crafted.  Melee combat is also fairly straight forward but it’s best to upgrade your weapons whenever possible as every area offers more dangers and if you don’t have a strong enough weapon, you could be in real trouble.  When at a campsite, you need to manually save your progress and are given 3 save slots to do so which is awesome, but if you do forget to save, you can only load to your last save as there is no auto-save option so save often!  Trial and error is the name of the game here and the only way to learn what to do and what not too is by trying it yourself and seeing what happens, which can be rewarding or could cost dearly.  It’s not all perfect and I ran into a few issues, like my pestle launching my herbs into the air when I grabbed it or items nearby disappearing after I saved game and sticks flying out of a fire thanks to some wonky collision detection though none of these issues broke the game, and only impacted my gameplay in very minor way.  What’s great is that every aspect of survival in here is it’s own skill and while I initially stumbled through the game relying more on luck that anything else, I soon began to get the lay of land, searching in areas I knew would yield food, building my campsites in record time and taking out animals with relative ease though by no means does the game ever really get easy as new variables pop up that tested my skills and pushed me to the next level of survival. 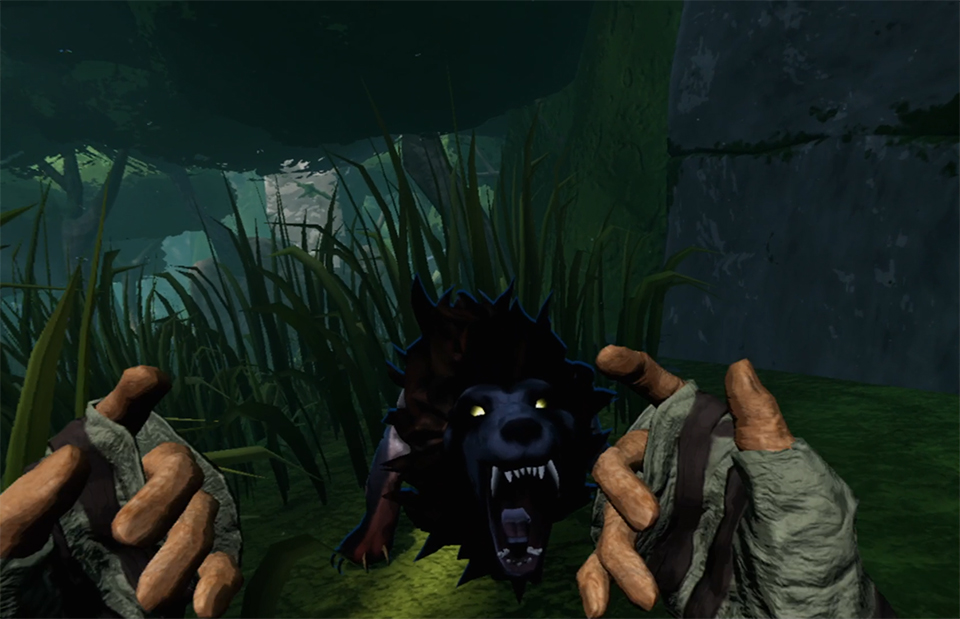 I died shortly a few seconds after I saw this.

Song in the Smoke is an awesome blend of survival and fantasy with some decent legs as to get through the campaign will easily take upwards of 15 hours, if not more and due the nature of the survival genre, I was never bored as I was too busy trying to live.  For those who love survival games, I bet you’ll dig this and for those that had never had much luck the genre in the past, Song in the Smoke provides an excellent middle ground with it’s immersive gameplay and simplified survival mechanics that still offer up a variety of ways to play the game.

What would I pay? This is $30 US and totally worth it as it has it has a ton of gameplay value, great presentation and is a ton a fun…and that’s coming from a guy who has never really cared about this genre up until now!

17 BIT provided The VR Grid with a press code for this title and, regardless of this review, we thank for that!