Zerotransform gives us Proton Pulse Plus, a VR Brick Breaker game available for the PlayStation VR, HTC Vive and Oculus Rift.  This plays very similar to Danger Ball from PS Worlds (review here) but with a wider variety gaming elements and choices.   You play through 3 Stages comprising of 50 levels or so in total and each ending in boss battle.  2 Move controllers can be used on the “aid” your game, but aren’t really need if you only have a DS4.   This review game was reviewed on a standard PS4. 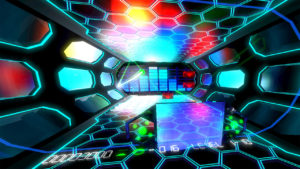 This is definitely a VR spin on a classic genre/game with you controlling a square paddle by simply looking where you want the paddle to move, but you are behind the paddle giving you a ground floor view of each level.  An added mechanic is switching between your head paddle or using your move controllers as giant tennis rackets and batting the ball around each level.  The Move controller option I found to be an exercise in frustration as I missed the ball(s) way more often with these on.  Also they lost calibration a lot, I found myself having to recalibrate every time I started a new level and even during each level multiple times.  It became a pain to use them so I just stopped and stuck with headset controls, which worked fine.

PPP starts off with simple levels that ease you into the game, it doesn’t take long for the action to get a little more amped up with many different variables changing up how you play.  Bricks become indestructible, others explode or take multiple hits to destroy.  Levels themselves take place in different shaped rooms making bounces unpredictable or include game changers like teleporters, rotating rooms or many other variables.  Added to that are the boss battle which incorporate multiple levels mods making for the most challenging levels in the game.

When it works, it’s fun, but it doesn’t always work.  Besides the Move controller support being almost unusable, some of those level variables hinder enjoyment.  Aiming your ball isn’t all that easy and levels with teleporters demand precision that is nigh impossible. With an inability to aim accurately and moving levels, breaking those last few bricks becomes a chore.  Levels are also timed so when you are out of time your ball changes into an erratic energy orb that acts like an insane ball on a string so in theory you can guide it to destroy those last few blocks, in practice it’s hard to control and just creates frustration.  Another issue I had is the ball can move to fast at times, and with explosions and other elements flashing in your face you can quickly lose sight of the ball and be down a life. 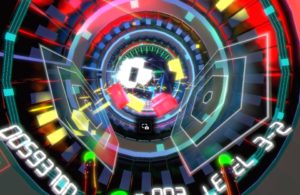 These paddles look cooler than they are, just stick with the Headset control

All the whining aside, this game does have some positive points.  While the visuals are nothing to scream about, they work given the game type.  I enjoyed the individual tracks as they are throwbacks to the MIDI tracks from the 80’s and 90’s, think Contra or Mega Man.  There aren’t enough tracks here though and some of the songs quickly wear out their welcome.  Lives are also given to you in ample supply, which I assume was the dev’s choice to balance out some of the more unfair elements at play.  If you do run through all your lives the game also lets you continue wear you left off so your progress never feels to hindered.

With all the positives and negatives at play basically balancing themselves, the bottom line here is how much do you like brick breaker? By the end of the game I was definitely done with it, but you may feel different.  Also, with games like Holoball and Danger ball this genre is already getting pretty populated so if you own either of those you may feel like this more of the same, though not quite as polished.  It is fun and some of the music had me bouncing to the beat, it just gets old and the only reason to replay is for the fun of it.

How much would I pay? The asking price of $10US is probably an alright deal if you only have 1 of the big 3 VR consoles.  However this game is also available for the Gear VR and Cardboard platforms for 1/3 of the price, and the only thing missing from those versions is the unneeded controller support.  There is definitely fun to be had here and completing the game will probably take you less than 2 hours.  Frustrations aside, it’s brick breaker, a tried a true game that works in VR, just not perfectly.