Tetris has been around for almost 35 years has been a staple of gaming ever since I first picked up a controller.  Since it’s original release in 1985, 132 individual licensed Tetris titles have been released across almost every major (and minor) platform including the most recent version, Tetris Effect.  When Tetris Effect was first announced just prior to E3 earlier this year, it was met with mixed reaction to say the least.  Many lamented how this classic 2D strategy game would work in VR or if it would even matter to VR users, though being developed by the team behind one of the most lauded VR titles, Rez: Infinite, did make many curious to see exactly what would be brought to our headsets.

Assuming you haven’t played Tetris before, the idea is simple.  A variety of shapes, called Tetrominos, built from 4 square blocks fall from the top of a small play area with you being tasked with flipping and moving them within the play space to create solid lines that will then disappear, or if you fail to make a solid line, slowly build up making your play space smaller.  The longer you play and the more lines you complete, the pieces fall faster forcing quicker reactions and more intense gameplay.  To aid you in this version of the game are a couple helpful options including the ability to store a piece to be used later, the ability to drop shapes instantly, increasing your score and a meter that builds up, giving you the option to pause the action entirely for a few seconds while still letting you place blocks until that meter runs down, giving you larger bonuses for the more lines you remove.  Between Journey Mode (The Campaign) and Effects Mode (Singular Games) there are over 30 stages available with the former having  set stages with game speed being the only modifier.  Effects Mode contains a whole bunch of game variations with most of the modes applying time modifiers like get ‘X’ amount of lines as fast as possible or getting the most points in 3 minutes and a few others.  The standouts, in my opinion, are the classic Marathon Mode which just challenges you to be as good as you can be at the game in it’s purest form and Mystery Mode which is the exact opposite of that with the game constantly adding new variables like inverting or flipping the play area, adding in mines, giving you giant blocks and a few other surprises that will keep you on your toes.

Despite all the pretty, it’s still tetris.

With Resonair at the helm, Tetris Effect seems to be relying very heavily on the visual component.  Rez was praised for it’s VR visuals, especially Area X, which was designed specifically for VR headsets and many people, myself included, were wondering if those kinds of visuals applied around the play space would be enough to immerse you in the game.  I happy to say that they do…most of the time.  When the visuals pop, THEY POP but the game is always focused upon the 2D play area, which means it can be difficult to catch all the awesomeness happening around you.  At times these visuals are very hypnotizing coming in just simple bloom effects to dots of light creating a variety of shapes like a whale or people with other backgrounds containing solid objects like umbrellas, a mountain range or 2 planets colliding.  It’s also worth noting that a bulk of the game’s visuals take place 180 degrees in front of you which, when focused on the action, is irrelevant.  You’ll notice this is when you take a second to look around and see that invisible wall where all those pretty effects just fade away.  Just to see how much of an effect VR adds, I did compare playing in and out of VR and if you think VR does nothing to Tetris, you are wrong.  With the option to move the play area closer or further away from you notice that the blocks do have a little depth to them which you will see in Mystery Mode as the game may tilt the play space giving you an angle on the play area that looks great in VR.  Sadly, in VR the option to tilt the play area has been disabled but is available flat and pops up in Mystery Mode so why the devs removed this feature for VR users is kind of confusing.

The backgrounds come in a wide variety.

Accompanying the stellar visuals is an equally powerful soundtrack.  Tetris Effect (especially Journey Mode) is designed to elicit emotions by giving you a variety of melodic and electronic songs that not only match your progression in a specific game but are timed with the visuals to make for a mesmerizing experience.  Moving and flipping your Tetrminos will also make some small sounds which somehow fit with the music, reminding me of how the sound creation tools worked in Electronauts.  The campaign music and level selection is static so if you don’t like a particular song (there was one I hated) you just have to power through.  Effects Mode is fully customizable and lets you choose any track and any stage to play around in, except the themed stage options, and is a great way to tailor the game to your mood and how you want to play.  While I did enjoy almost all the tracks, the ones containing vocals just seemed to resonate with me more and when included with the sounds you make by moving the pieces, are amazing. 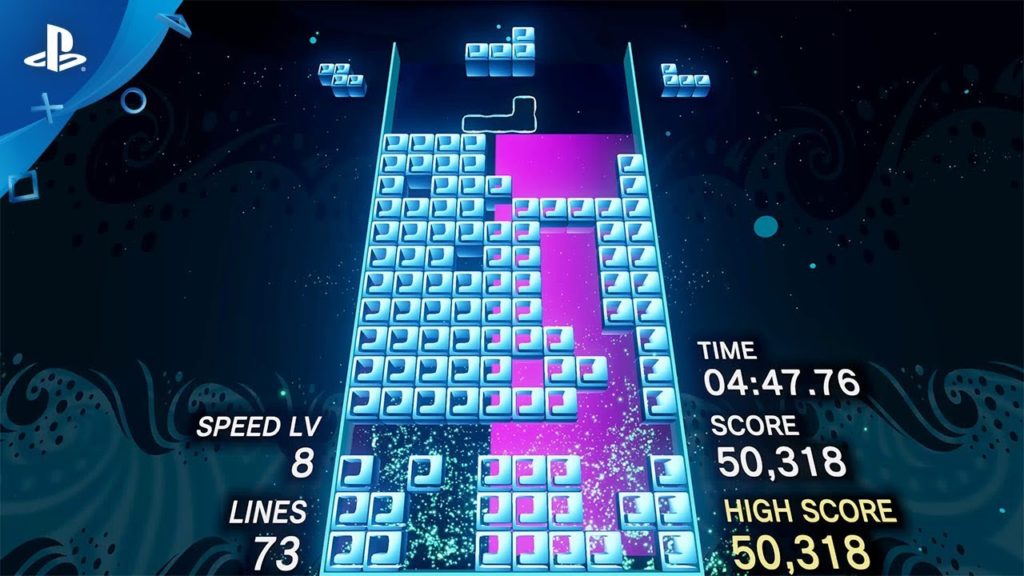 This is the best view in VR, but for some reason we only get it in 1 mode of the game.

The more you play, the more experience you accrue which is used to unlock avatars in Effects Mode.  In this mode you can view your other friends Avatars and see where people are playing around the world, though unlocking all of the Avatars will involve a lot of playtime.  Leaderboards are available for every mode in the game and is a nice way to make this competitive which brings me to my one big negative about this game…no multiplayer.  The more I played Tetris Effect, the less this mattered to me, but I think its lack of inclusion is still notable.  I would have loved to face a friend in real-time just to see who could to better (especially in Mystery Mode) and see their play area beside mine as effects explode in the background and the game gets more intense.  Besides that, the only other item I can complain about is the lack of the original Tetris Theme, which is actually in the game, but appears to be only available at select ‘event’ times exclusively in Mystery Mode.

This is harder than it looks!

Tetris Effect is, for all intents and purposes, the best version of the game I have ever played…in or out of VR.  The presentation alone is worth the price of admission and all the different modes available make this the most repayable version of the game to date.  For all the praise I will give this game though, you are going to have to like Tetris to fully appreciate this.  If you have never been a fan of this puzzle/strategy series, then all the extras included aren’t going to change your mind on the core gaming experience.  For everyone else though, this the best version of a game that has stood the test of time for over 3 decades and offers some amazing moments that can only be experienced in VR.

What would I pay? I’m personally happy with the $40 price tag and I was leery about that before I purchased it.  With tons of modes, songs and gorgeous visuals along with he leaderboards and the Theater Mode, which lets you just enjoy the presentation and removes the game, if you have ever enjoyed playing Tetris and own a VR headset, I think you’ll be pleasantly suprised by everything included here.