My first impression upon downloading and installing SUPERHYPERCUBE was “Wow, that was quick!” Weighing in at just over 200Mb and having a decent broadband speed, it took about 1 minute before I was ready to press the controller button to start my first game.   SUPERHYPERCUBE is best described as a cross between Tetris and that TV gameshow, ‘Hole in The Wall’.  At its simplest it’s a puzzle game involving cubes and fitting said cubes by matching their shapes to a wall that moves slowly towards you, giving you precious moments to turn, rotate and flip the cubes into the correct position using the DS controller. 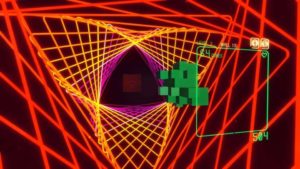 Neon Psychedelics are the order of the day.

At the start of Level 1 you begin with a singular cube and a cube shaped hole, easy enough but after each successful pass through, additional cubes are attached to your ever-growing mass along with more intricate wall shapes needing to be deciphered and manipulated quickly.  Fail to match the wall shape and the outstanding cubes are destroyed, leaving you to build them up again. One more crash of blocks and it’s game over; right back to the start of level 1 again. The ever-encroaching wall gives you roughly 10 seconds to match the shapes, but if you match the blocks fast enough, you can boost the cubes through the hole and be rewarded with an increase on your time and bomb gauges. The time power up sends everything into slow motion mode giving you more precious extra time while the bomb power up literally explodes any difficult looking walls and moves onto the next set.

It’s very simple premise is very effective being both addictive and incredibly fiendish. Now I am the first to admit that I’m not very good at Geometry or manipulating shapes; my skills seems to be more along the lines of fitting blocks into holes with those toddler toys.  That said, I found the learning curve quite steep and it took me a good while before I was progressing at decent pace. Frustration soon turned to addiction though as familiarity and knowledge soon had my beating my own high scores and climbing up the leaderboards.

This is a game that relies heavily on score and achievement. The main menu consists of friends, personal and world high score leaderboards and it’s always gratifying to discover that you’ve leapfrogged a friend or made an impact on the world. There are no additional game modes, just the main game which makes it so simple for everyone competing.

It’s a basic notion for sure, but the visuals and audio make the game come alive.  Featuring neon graphics full of fast switching colors and cool blooming effects.  From the in game representation of the DS controller to the patterns whooshing past, it’s a sight to behold and one which makes it a pure visual delight.  The beauty of VR gives SUPERHYPERCUBE, and puzzle games in general, that added element of immersion. The way the cubes are centered in your viewpoint means that you must look around the cubes to view the approaching wall while also examining every aspect of your shape, meaning it’s a great way of getting more involved and a fantastic feeling of 3D and perspective. 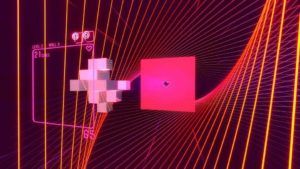 Things get serious as the cubes mount up

It’s simple, rewarding, addictive and clever but it does have a few negatives. Once you crash twice you are sent straight back to the start, despite any progression on your part. There are no checkpoints or saves here. Additionally, despite a few variations such as spinning walls, the game does suffer from repetition.  As a PSVR launch title, SUPERHYPERCUBE greatly achieves what the developers have set out to do and that’s make a puzzle game which is both addicting and clever.

What would I pay? At £24.99 this is overly expensive for a game of its ilk. Despite it being a fun title, it’s simple premise and lack of replay value seems more suited to the £10-£15 mark. I recommend looking out for sales in the PS Store.