The Suicide Squad is here, and if the movie didn’t have you glued to your seat than this definitely won’t.  Downloaded from the Oculus store, for free, this super generic game has you playing as 3 squad members; Harley Quinn, Deadshot and a fire dude (I don’t know his name nor did the game bother to tell me what it is).  You face wave after wave of monstrosities that assail you from all sides while you stand in one place.  Each character has 2 attacks and as you defeat each wave you change environments and enemies become more challenging. 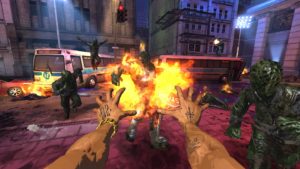 Visually, this game looks alright, obviously borrowing its looks from the movie, but with a cell shaded design to make it look more comic bookish.  Environments look good and the enemies that assault range from monotone “zombie” type dudes to some bigger more detailed enemies.  I noticed a fair bit of clipping issues as enemies walked through environments and obstacles quite often, which not only detracted from the experience, but cheapened it.  I had way more issues with the audio, which was basically non-existent.  Everything that’s offered just sounds muted quiet repetitive or just absent, and considering it’s a tie-in, that seems criminal… just give me a sound bite!

The game mechanics are serviceable enough, but as a tie-in, I’m a little let down.  With the lack of content here, I feel like this was another title entirely and just got re-skinned at the last minute and released to help promote the movie, and although not terrible, it’s nowhere near great either. At around wave 14 or 15, the game goes from being challenging to unfair and becomes a chore to play as upon death as you must start from wave 1 again. Any kind of back story would have been appreciated and this whole game feels more like missed opportunity than anything else.

Psychonauts in the Rhombus of Ruin
February 23, 2017