City Builders have been an established genre for over 30 years thanks in large part to the Sim City franchise though in the last decade we have seen a new king rise with Cities Skylines seemingly dethroning the competition and becoming THE City Builder to play.  VR has largely ignored the genre up to this point which makes the release of Cities VR more exciting as not only is it the VR adaptation of Skylines but comes from a developer with a solid track record for making well regarded VR titles in Fast Travel Games. 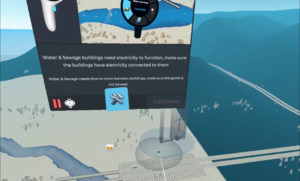 A brief tutorial explains the basics of city building.

Those familiar with Skylines will feel right at home with the core game design here as it remains largely intact with you having to build your cities, roadways and infrastructure which includes utilities, zoning, sewage systems, powerlines, and a host more options that unlock as your population grows.  There is no story or campaign in here, just select 1 of 9 maps and turn on or off “unlimited money” or “unlock all milestones” and whether you want to play with the opening tutorial or not.  You’ll view the 2 km² of real estate from way up high and can change your view using the thumbsticks with comfort options available that allow for click or smooth turning and adjustable or removable blinders.  All your building options are handled by a creation wheel on your dominant hand which requires you to use the thumbstick to point at which structure you want to select with many options being available in sub menus making for a system that works, but can be cumbersome, especially when more and more options become available.  Navigation through the menus requires selecting floating icons to switch between building & economy sub-menu’s, holding grip on 1 hand and B on the other to back out of menu’s or pressing X to demolish something.  It’s not a broken system by any stretch, but I oftentimes found myself selecting the wrong option and had to retread my steps to do what I actually wanted to, and I can’t help but feel like the menu system could be tweaked and improved. After the brief tutorial, you are left on your own to build the city as you see fit; expanding, upgrading, and responding to the various infrastructure issues that arise until you unlock new building options that allow you to create a Metropolis you are happy with. 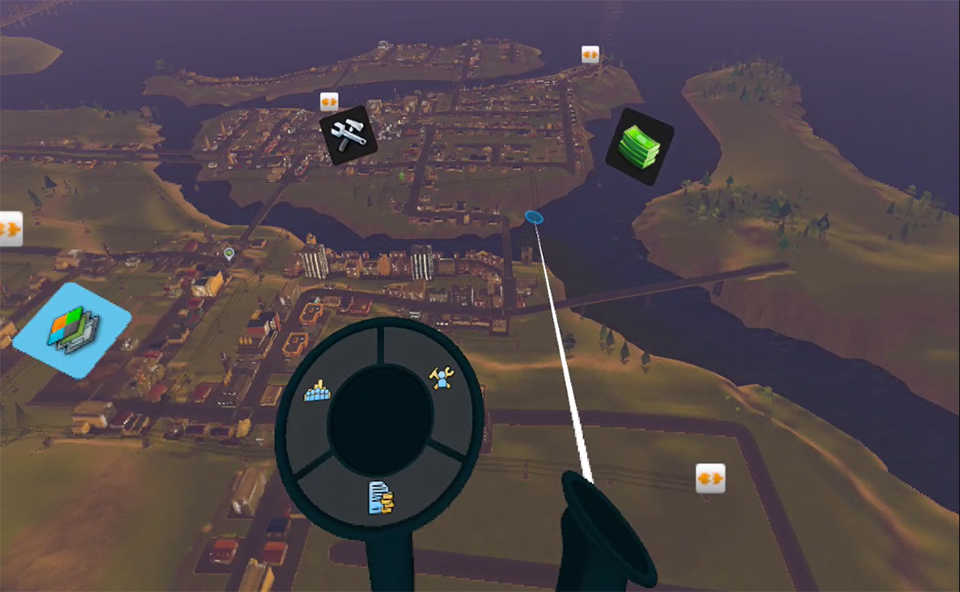 There are a variety of options to consider when placing buildings.

Cities VR captures the look and feel of its PC counterpart with a layout that echo’s the flat game and construction designs and animations that are inspired by the original.  Unfortunately, none of them hold up too much scrutiny as the game just doesn’t look that good with a rather bland color palette and rampant pop-in affecting almost every moment in the game. Building details and textures will appear than disappear depending upon the turn of your head with trees morphing before my eyes and it’s clear that the Quest 2 is struggling to render everything in place, which would explain the drastically reduced 2km² area you get to build in compared to the 17km² available in Skylines.  While any individual asset can look rough, when combined and viewed from a distance, the city can look quite busy and at times I even marveled at the amount of traffic, people and building animations happening before me…they just don’t ever look great. The various maps all offer their own unique designs with most having an array of islands you’ll have to chain together to expand your town to it’s fullest.  The menu system had me longing for a HUD to display pertinent information as the combination of navigating through the various menus and turning my wrist to view city statuses just got annoying.  There is an active day/night cycle which on paper sounds great, but in practice makes for some pacing issues as during the nighttime the city is just harder to see and for those that would just fast forward time and skip those darker hours, the fast forward option available in Skylines is noticeably absent from the VR version.  When you consider just how much activity is happening at any given moment, it’s impressive, but the visual sacrifices made to get this on the Quest has me questioning if it was even worth it, and no, there is no true street view, and you can’t walk around the city at human scale. 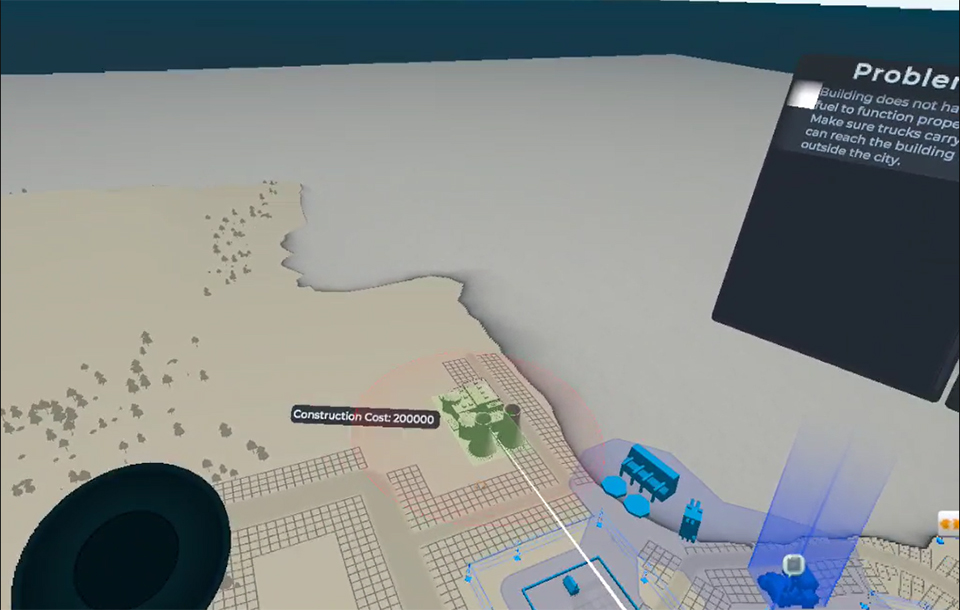 The color palette changes when you build stuff to make your infrastructure easier to see.

Sound design is up next and it’s…weird.  Typical enough, the start of any level has some pleasant and upbeat background music playing while sounds of birds and wind highlight the natural area you are about to destroy for the sake of humanity’s expansion.  As you expand your city, moving in closer to it or selecting specific building will have those specific sounds entering your ear holes so dropping down to (near) street view in a residential area will have dogs barking and cars slowly driving by while moving near rivers or industrial areas will elicit sounds of flowing water or factories respectively.  As I moved through a city, the transitions between those sounds were abrupt but still sounded alright with the 1 weird choice being the suspenseful music that plays during any stage.  I’m not sure if was a left-over track from their previous Horror title, but when I noticed it, it felt nothing short of unnerving and did not fit the vibe of a city builder at all. 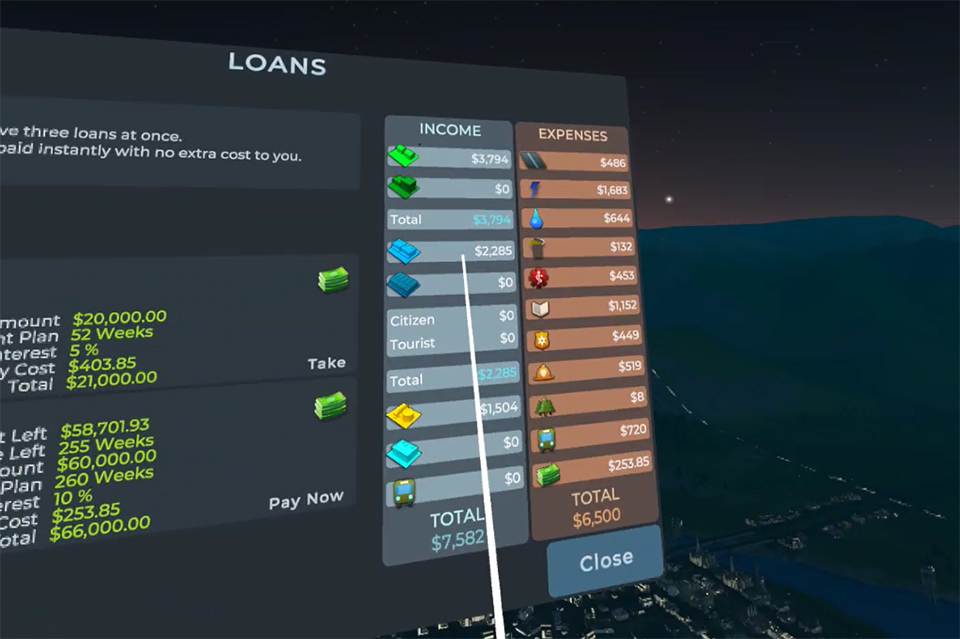 When it comes to your economy, there’s a lot to balance.

Cities VR is, gameplay wise, a solid translation of Skyines for VR but the UI choices and tech hinderances really have me questioning if this was worth the effort to put in VR, or specifically, to cram onto the Quest 2.  While most of the city building options appear to be in here, the drastically reduced play area has your cities actually being incredibly small.  Multilane freeways and traffic circles seem like more trouble than they are worth given their size and the small amount of real estate for the towns and feel more like challenges to place than any kind of organic expansion.  With the plethora of options all being handled by 1 controller, selecting said items was nothing short of irritating as you need to point your thumbstick at the items around the wheel menu.  Multiple problems happen here as it can be quite easy to accidentally select the wrong building/road and not realize it until it’s been placed forcing costly and unnecessary demolition.  The tutorial explains the ABSOLUTE bare minimum, not getting into loans, taxes or how the economy works leaving the player to figure it out on their own, which is fine, except the game is rather complicated and it took me 5 restarts and plays through the tutorial before I figured out that I was building too fast for the game causing my city to go into massive debt, preventing me from building anything and just sitting there wondering what I missed.  I’m sure some of these issues will be fixed in future updates but even if some of those smaller ones are, I can’t help but wonder if VR, and specifically the Quest 2 platform, just isn’t ready for this genre type as the lacking presentation and scaled back play space really does the game a disservice. 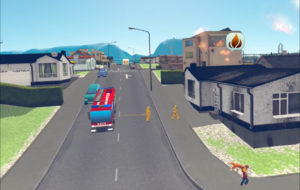 You can get down close to see what your residents are up too.

Once I figured out how to make my city flourish, the game loop quickly devolved into me waiting for cash to upgrade and waiting some more and I know this genre isn’t exactly known for fast-paced action, but this feel particularly monotonous.  Even as I grew my city, I couldn’t help but notice just how limited my real-estate was and while that’s not game breaking, I just questioned why I wasn’t playing the PC version which looks way better, has a few more building options, mods and allows for a truly substantial city and not just a demo-sized one.  Cities VR, I think gets the job done when it comes to gameplay, but just barely, making for an experience that will disappoint city builder veterans and frustrate new users to the genre

What would I pay?  This is $30 US and I can’t recommend what’s here for that price.  When it comes to VR vs flat gaming, my rule of thumb is too always play the VR version as VR is just better.  With that said, there are exceptions to every rule, and I think Cities VR is one of them as the VR version is cumbersome and strips away much of what makes this game type enjoyable in the first place.  If you’re looking for a classic city-builder, you may just want to stick to the PC or console experience or wait for this to go on sale.