Reborn: A Samurai Awakens has been in development for ages, originally announced all the way back in 2017 as one many titles associated with the China Hero Project which basically promotes the Chinese development of games for the PS4.  The launch trailer shows off frenetic action not unlike what we saw in Sairento and looked to be a promising title merging shooting and sword wielding action against waves of cybernetic opponents. 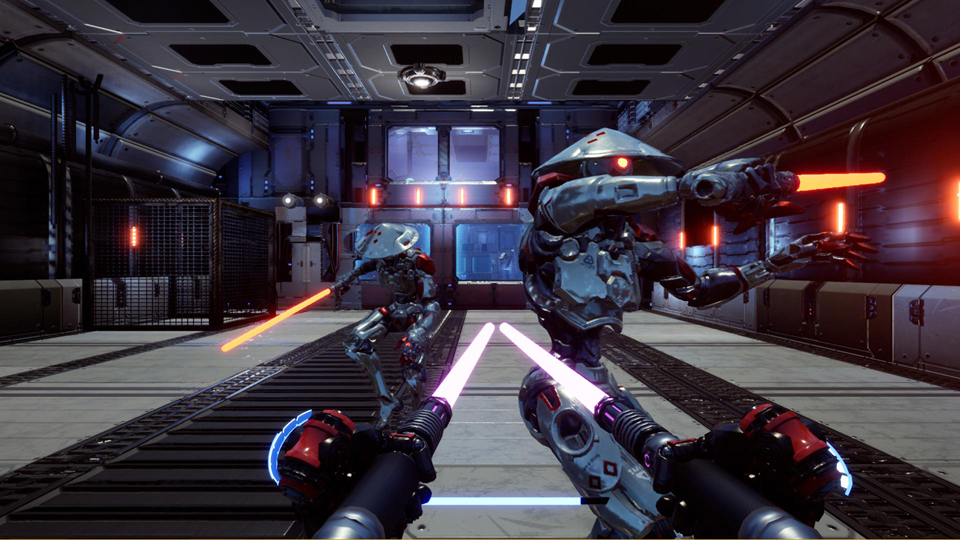 I’m going to get right to the point on this one and say this game has almost no redeeming qualities.   Locomotion is little more then walking forward with no turn option  available, save for head tracked turning, as you move to the next node, which will turn you in the direction you need to face as enemies spawn ahead you.  With 2 move controllers you can switch each hands weapon from a gun to a light saber allowing you to shoot the foes at a distance but deal with the sword wielding enemies that get too close.  There is supposed to be a parry system in place, but it seems to work randomly and is irrelevant anyways as you can take an insane amount of damage and hurt your foes by just waggling like a mad man.  There is gravity gun ability you can use to suck enemies in, but they have to be close enough to use it, making it an instantly forgettable power, save for the fact that  it is also need to trigger teleportation points on the other side of obstacles.  Your swords can deflect incoming lasers, but this mechanic is so forgiving that as long as your blade is somewhere in front of, you’ll deflect every shot…even if you aren’t looking.  Each stage is broken up into a couple of smaller areas that throw what seems like endless amounts of enemies at you in a veiled attempt to bolster the games length. Boss battles pop up and devolve into the same actions you perform against peons or turn into quick time events that require you to line up your sword with a floating image of your sword which somehow causes the enemy damage.

Reborn looks terrible with frame rate drops happening often and while I don’t mind the art style here, it gets old quick as you navigate the same looking rooms and fight the same enemies over and over and over and over again.  Collision detection is non-existent as proved by just holding your sword out in front of you at an enemy, whereupon they act as if you are swing wildly while slashes appear on the screen emulating what should happen if you were swinging a sword.  Enemy animations are laughable at best with almost all of them being broken or recycled.  Enemies get constantly caught in animation loops, not doing anything at all or even jerk into place as they reset back into a default position.  Occasional moments of glee occur when you slice a bot in half, but these seem to occur randomly and after you see it once or twice, it’s old news. 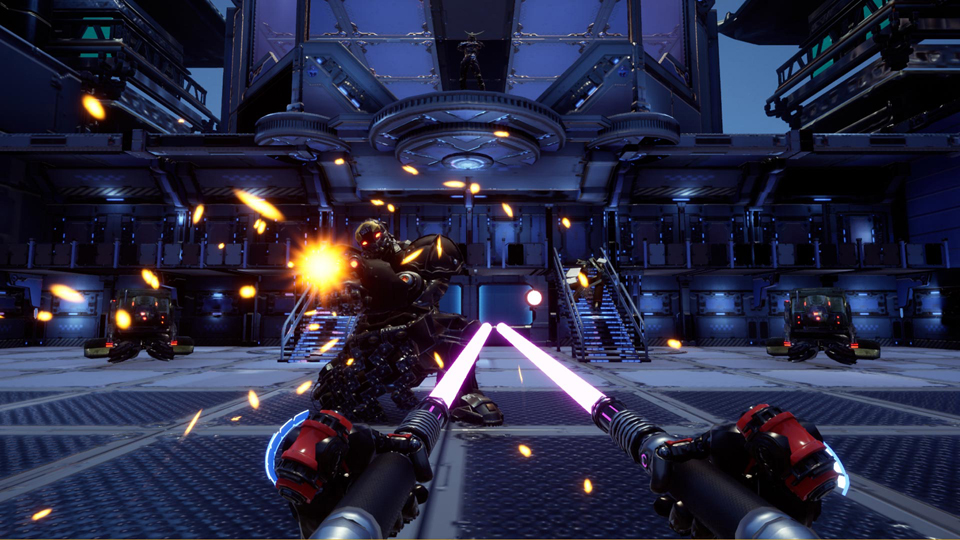 Just hold your swords out and you’ll win almost every encounter.

Audio is also uninspired with a very generic music track playing in the background while you enjoy all the sweet sound effects.  Those sound effects include the non-stop ‘pew pew’ noise your gun makes as well as the light saber sounds, which sound exactly like were ripped right from the Star Wars universe.  Brief communications between you and the bosses are little more then text at the bottom of your screen and don’t forget the enemies who also make the same noises again and again as they announce their presence and attack you.

There is so much in this game that misses the mark as to what we should be expecting from VR titles.  The wagglefest I mentioned earlier can be bypassed by just holding your sword out in front of you while the enemies just walk into it and holding it out like that will still deflect incoming lasers.  Every room you find yourself in throws wave after wave of the same idiotic robots your way and are so easily dispatched that the action gets instantly repetitive as soon as the game starts.  With 6 stages to get through, the monotony of this game is what I struggled with the most and this became a war of attrition with just how much of the same encounters my brain could take.  Game crashes also affected my experience forcing me to replay stages from their onset which is next to pointless as this game pretends to have some sort of story, but I honestly couldn’t tell you why I’m attacking these robots except because that’s what the game forces me to do. 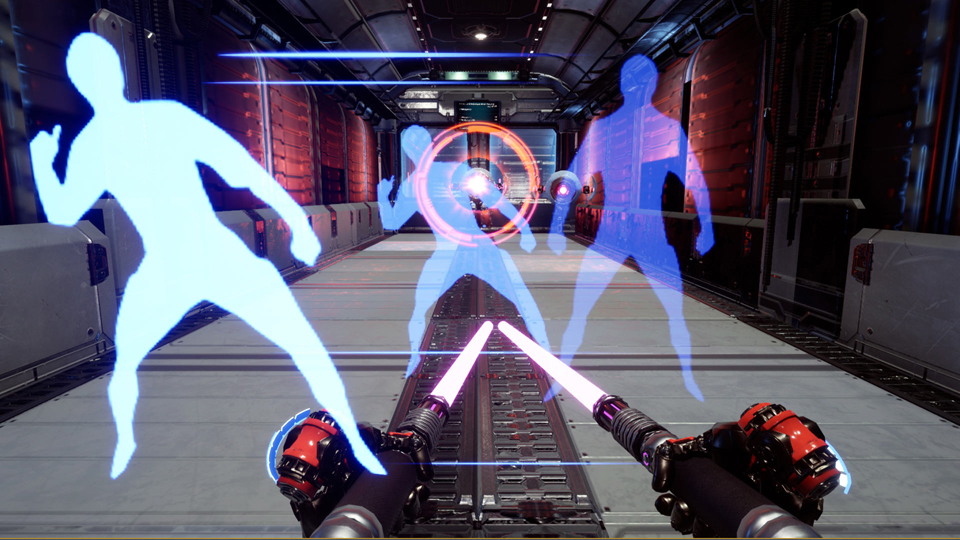 There’s a dodge mechanic in here as well, but it’s irrelevant.

When it’s all said and done, even if everything worked as designed, Reborn would be a completely forgettable wave shooter.  Unfortunately, we don’t even get that and instead get a game that suggests whoever was in charge of Sony QA that day decided to call in sick and let one of the interns take over.  Frame drops, terrible, repetitious gameplay, incomplete animations, minimal to non-existent story, busted mechanics and an overall lack off care and polish make this a game to be avoided at all costs.

What would I pay?  If this was free, I’d say don’t bother.  VR as a whole has moved way beyond what’s offered in this ramshackle game.  Titles like this only hurt VR and I feel sorry for anyone that has wasted there time playing this game.

Circle Entertainment provided The VR Grid with a press code for this title and, regardless of this review, we thank them for that!