Sword fighting is one of those activities that most gamers can admit to having fantasized about at some point in their gaming lives.  We all want to try it, but we sure as hell don’t want to risk our gaming digits doing so.  Luckily the folks over at Impromptu Games have come up with an interesting game called Stolen Steel VR that lets us experience a little swordplay without the personal risk. Well, provided you have a sizeable play area and properly use your controller’s lanyards. 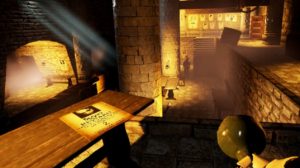 Stolen Steel VR is a sword fighting game where you will face off against AI controlled guards in one of two arenas. The main objective is to kill as many guards as possible without dying, racking up points in the process. This can be done in a few different ways, challenging the guards head on, or sneaking around the shadows and assassinating your opponent from behind. It should be noted that assassinating your opponent will yield more points per kill than going toe to toe. Why should you care about points you ask? Well, the folks at Impromptu Games included Steams leaderboards into the game and the player rankings are conveniently displayed all throughout the arenas on wanted posters that feature the top players gamertags and profile picture!. The higher your kill count, the higher the reward for your head, and the more notoriety you gain amongst your fellow gamers. Not a bad reward for all your hard work.

You will have a variety of different sword types to choose from, ranging from claymores to fantasy swords, as well as breakable bottles, eggplants and assorted fruits to slice or throw at you enemies. You can even dual wield to your heart’s content as well as throw your weapons at your would be target. All of this does a fairly decent job of keeping gameplay interesting.  Whereas in stealth kills all weapons are created equally and even a bit of fruit will one shot an unsuspecting guard, bringing an eggplant to a toe to toe sword fight will almost certainly get you killed.

Your opponents in Stolen Steel VR are dumb, but still deadly. There’s just no nice way to put it, the AI is somewhat dim witted and while the game claims to up the difficulty as your kill count increases, I simply did not see that. Guards can be distracted or alarmed by sounds, such as tossing a bottle across the room or accidentally breaking one, and they do a fairly good job of tracking you once you are found. Unfortunately, the guards can easily be backed into a corner and lack any real variations in fighting style. This makes it all too easy to just use the arenas layout to your advantage. The AI is not completely useless however, if you are slow with a block or get greedy with your swings, you will get killed.

The controls are simple to get the hang of, you have a button to grip things or lock picked up items into your hands and release them, and the trackpad is used for movement. The only option for movement is teleportation and this highlights another downside to this game. You can pretty much move anywhere, instantly, without alerting guards. This makes sneaking around rather easy as the guards won’t even notice you if you teleport directly behind them. This style of movement also makes movement in combat feel a little clunky when you’re trying to dodge or rush a staggered opponent.

The graphics in Stolen Steel VR are very pleasing. The lighting, swords, guard models and even the torches hanging on the walls are all well done and have enough detail to keep you looking around to take it all in. The level of detail in the two maps is enjoyable and makes it very easy to get lost in the atmosphere of the game. The sound is also good with the only noticeable flaw being that your sword, no matter how fast, slow, or little it moves will always make the same “whooshing” sound as if Conan the Barbarian was trying to take off your ear with a mighty chop. 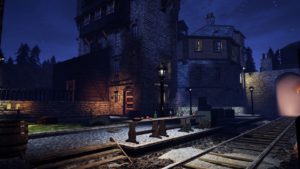 Great lighting in the outdoor arena shows off its enjoyable detail.

The two arenas you can play in are fairly small but pack a lot of obstacles, corners, and shadowed areas that make stealth gameplay viable. You have visibility indicators on the backs of each of your hands that are tan when visible and black when not which works well, once you get the hang of it. Unfortunately, this potentially amazing mechanic can be almost completely ignored by just teleporting behind guards, making the arenas basically little more than eye candy unless you ignore the ability to exploit the teleportation movement.

Despite the flaws highlighted in this review, this can be a rather enjoyable experience. You just need ignore the simple AI, broken movement mechanics, and avoid the temptation of easy points. However, Stolen Steel VR does highlight the potential for a stealth assassin style game and the inclusion of the leaderboards in the arenas while you play give the game a fun and rewarding competitive vibe that was brilliantly pulled off.

What would I pay? If Stolen Steel VR was marketed as an early access game with a $4.99 price tag, I would be more comfortable recommending this game to a friend. Unfortunately it still needs a bit of work.  It has some flaws that simply need to be addressed before I would pay the asking price.

Impromptu Games provided theVRgrid with a review copy of this game and, regardless of our score, we thank them for that!