Coming from a developer like Ubisoft, you’re expecting something solid, right? Star Trek has an established fan-base who would love nothing more than to dive into a bridge crew and be a part of the action. Does the game deliver? Absolutely. It could use a bit more depth for those of us familiar with Starfleet Academy, but what it might lack in overall science-simulation it makes up for in fantastic, memorable moments with real live people playing along. 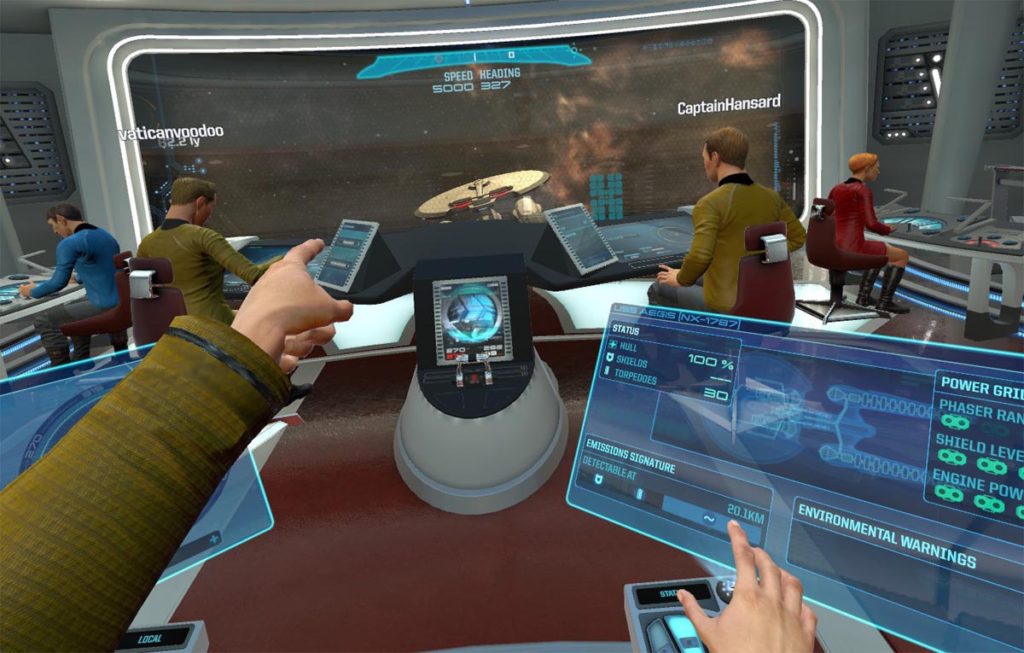 The premise of the game is simple. You play as one of  four vital positions on the Starships’ bridge. The Captain is first and foremost, the man in control, but by voice only. The decisions made in the game about whether to fight, flee, transport, keep shields down, etc are all his decision, but he cannot actually execute any of them. Besides being a tactician with a plan for the larger picture, he has little else to do than push the RED ALERT button and oversee what is happening and using his limited feedback, make decisions his crew will hopefully follow. If you are a terrible Captain, your crew can literally do whatever they want. However, playing together nicely as a team is a huge part of this game and some of the decisions you make, albeit foolishly, are what truly make this game outstanding.

The Engineer will be handling where your power is being diverted. Phaser Range, Engine Speed, and Shield Power. He is responsible for pushing for more power to engines for a hasty retreat or more power to phasers to wittle away at an enemy just out of range. This is considered the easiest position in the crew, but it’s importance is not negated but the simplified controls.

The Tactical position is responsible for scanning objects, vessels, and anomalies found throughout your missions. This will give your team a tactical advantage that your Captain will (hopefully) take advantage of. Besides running scanners likes a madman, you will also handle combat; firing phasers, torpedoes, and firing disruptors to weaken various elements of an enemy ship; it’s weapons, shields, engines, etc. You can limit the incoming damage to your ship, slow a pursuit, etc. The cooldown is not long on the disruption, but this is a vital element to the game and along with being responsible for arming torpedoes, launching them (very basic but still cool) and firing phasers.  You are going to be instrumental in defeating any foes you meet and are also responsible for scanning objects found in space.

Finally, Helm. They are responsible for keeping the ship flying in the right direction, using your impulse engines and warp drive to move throughout space quite swiftly, and ensuring that the enemy in your phaser range never leaves the 180* arc forward off your ship. This is one of the most on-hands positions you can play, which is why a lot of people tend to shy away from it and more towards the quieter, role-playing focused roles. 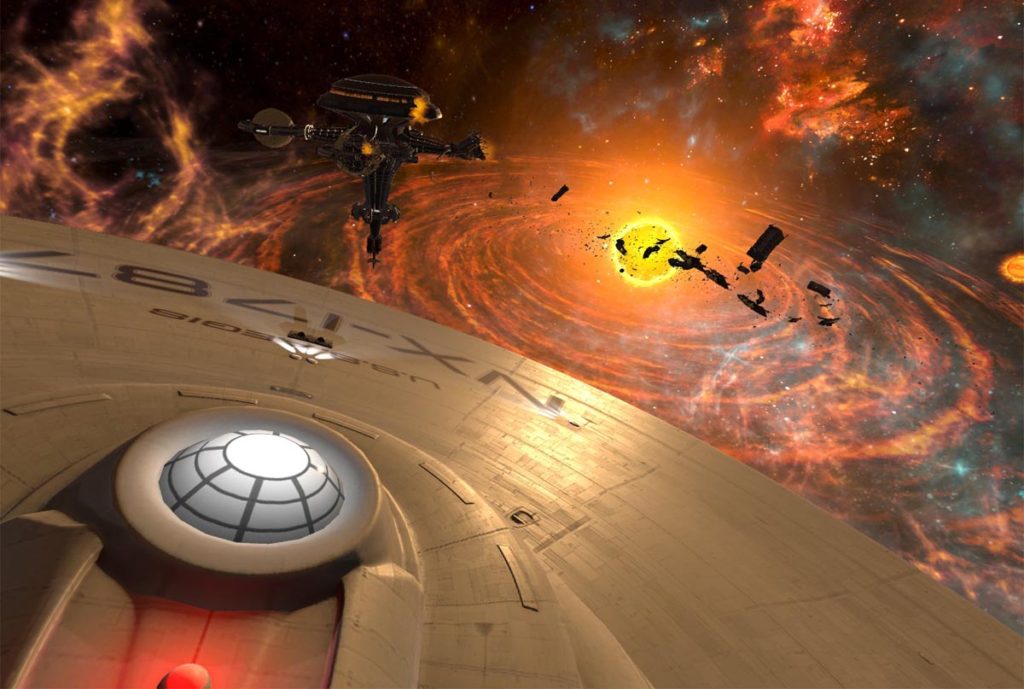 Make you check out the view outside the ship, it impressive at times!

Using both of the Vive controllers, one for each hand, you are given a graphical interface at your position that requires you to poke, prod, and pull at. You can point with your finger, make a fist and grab at certain objects at your station, such as initiating warp or impulse there’s a lever requiring you to flip it to activate, but most of your actions will be with a pointed finger; even steering the ship you point a finger and use a virtual joystick on the console. There is no room-scale required here, every crew member is in a sitting position, no standing required or even available, so everything happens directly in front of you, which raises the immersion level.  Also available is gamepad support which has the same control layout, but forces you to navigate that positions controls through a menu, it’s a more precise method of control, but takes more time to navigate through your options.  Either method works great once you master the controls.

There’s an instant RESET CAMERA button as well which is very handy when your fingers seems to be slightly off where you feel they should be hitting. Control wise, anyone can step into this game and figure out the basics of how to control your console in a relatively small amount of time, though mastery will require some serious play hours.

Graphically, the game is top-notch on the Vive. With simulated arm and hand physics, an immersive environment on the bridge with fires popping up as you take damage, and some great effects helping sell space as you fly through, it is a very solid piece of visual entertainment.

Gameplay wise, the system work. It’s flight and damage simulations are not as advanced as Star Trek Academy, running into something in space is not going to blow you up and there’s no options to increase phaser damage unfortunately, only range. However, the combat VS the AI still requires some deft maneuvering and fine command to keep the shift in optimal positioning. The missions vary from scanning items/ships to finding something/survivors, but the variety isn’t anything to write home about. Many of the missions are all about stealth, avoiding conflict when you can, then fighting to survive while trying to complete optional mission objectives (that don’t really get you anything). The thing to write home about in this game is the teamwork and roleplay that a good, serious online co-op mission brings to the table.

“Third Mission in, everything clicked. Taking it slow, every person was waiting on orders as necessary. My Captain skills were on point along with helm, ordering full stops and observing enemy movements, sneaking in quietly to scan and disrupt enemy technology, and completing our optional objectives. Finally, near the end of the mission we were forced into combat against 3 (or 4)? enemy ships. We were taking heavy fire and unable to outrun our enemies, but we needed to rescue a crew. I slammed us into full reverse as a ship came behind us, allowing us to take 1 of the ships out. I ordered full speed ahead and we pushed towards the ship needing rescue with 2 ships hitting us from both sides. With our hull at 55%, I made the decision to lower the shields and amidst the enemy fire we managed to scan and teleport the surviving crew off the friendly ship. 6% hull left, we raised our shields as fires raged around us, I ordered our helmsman to turn straight towards the closest enemy and with full speed ahead we managed to burn past him, giving us precious seconds as he was forced to slowly U-turn to catch up to us and we impulsed out of there in the nick of time.

It was amazing. There wasn’t any joking around this round, just good clear solid communication and some (humbly) good decisions by myself as Captain, great piloting, and my crew trusting my decisions mixed with great teamwork that allowed us a tactical advantage for combat, and also allowed us to complete our objectives while under heavy fire. We were cheering out loud when the mission completed shortly after.” 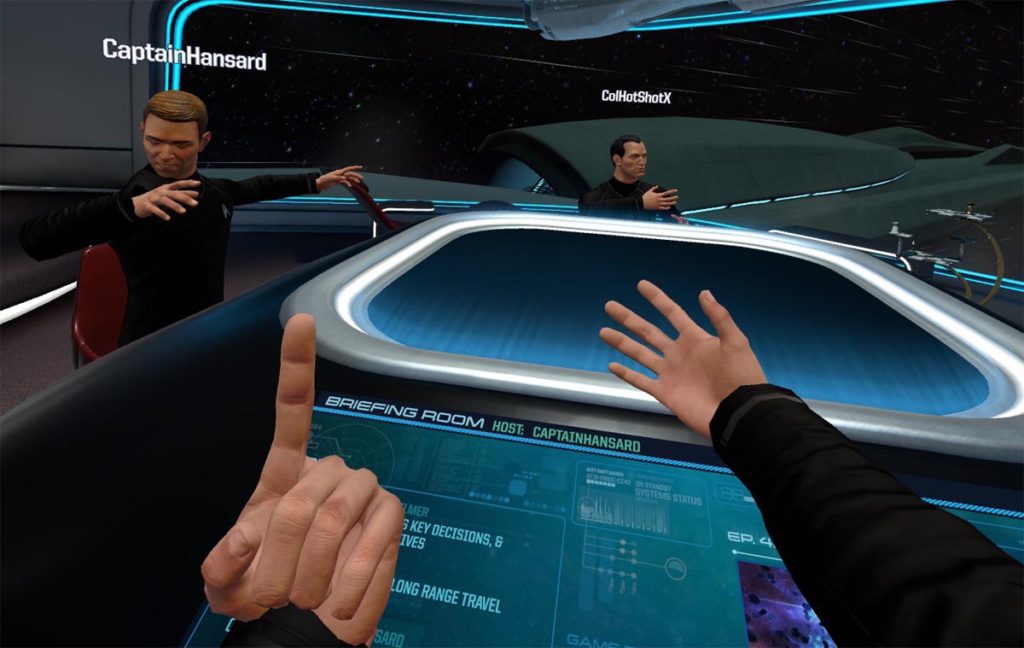 The mapping with the Touch controller makes for some interesting views and enhances immersion!

While the game might be a bit light on content (5 campaign missions with a bonus mission, but a mission generator included as well), it does itself a solid with the experience(s) to be had. A Trekkie will enjoy the game more than the average joe expecting some balls-out action, but IMHO it is an experience not be missed by anyone. With the classic Enterprise include raising the difficulty bar, it could use some more DLC and missions. In the end, Star Trek Bridge Crew has been nothing but a stable, fun, great looking game with some of the best social interactions I’ve had on the Vive, making it one of my most memorable VR experiences so far.

What would I pay? Being a Star Trek fan, I would pay the $60.  Is it worth $60? If you’re not a Trekkie, no, but if you are, dive right in and enjoy everything this game has to offer.  The average gamer would probably be happier with a $30-40 price point.