Spuds Unearthed is an odd little VR title that puts you in (sort of) command of your potatoes troops as you travel across the galaxy in your spaceship containing your pre-French fry civilisation.  Its up to you to rescue other potatoes while defeating zombie like spuds that try and destroy you and your home base. 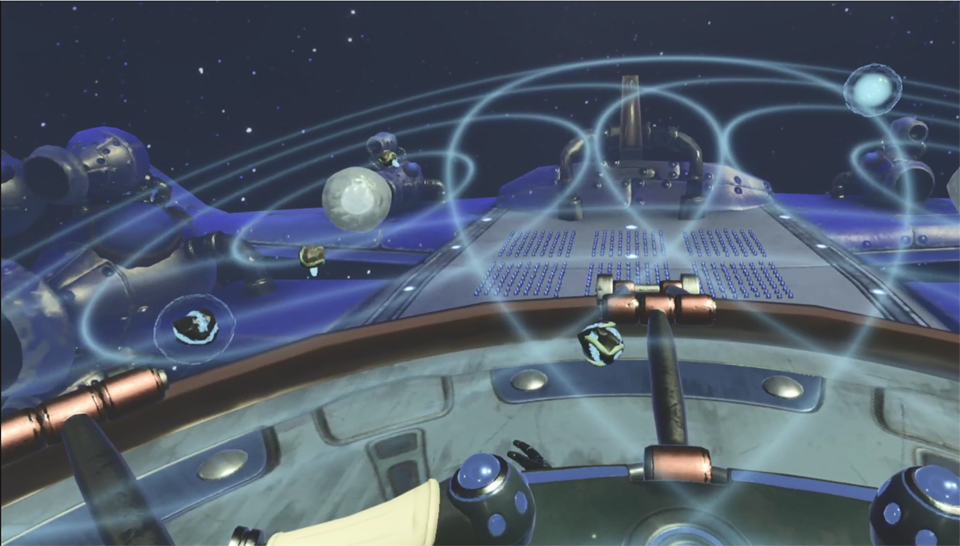 Pick a planetoid and let the action begin!

After a tutorial which is nothing more then 14 separate text bubbles that break down each element of gameplay from upgrading some of your troops, changing weapons types and your general goals, you navigate via elevator to a galaxy map, which shows the levels you can choose to play.  Easy levels are the tiny asteroids, Medium are the mid-sized ones and the hard stages are the giant asteroids.  Simply grab and place the level you want to play on the console in front of you, grab your warp levers and push them forward and it’s GO TIME!  When in an actual battle you are at one side of the play area while the enemy Zombud base at the other.  Each stage has 3 paths that your troops travel upon with 3 smaller stations that need to be taken out before they destroy the main one.  You have 2 customizable guns in front of you that allow you to assist your spuds by shooting only at the enemy troops as you can’t damage the enemy technology.  Before you also sit some hero potatoes, each with their own special abilities that can be picked up and thrown onto the battle area to change the tide of battle should your standard troops need help.  Standard troops spawn and walk on their own accord so much like lemmings, it’s your job to help see them to the other side of the map by clearing a path.  Your guns can overheat so pay attention to the meter beneath them and as you progress through the campaign, rescuing spuds, you also unlock new heroes, hero upgrades and weapon modifications beyond the standard rotary guns, including shotguns, flame balls and few others with modifiers to how each weapon fires as well.  There’s also an asynchronous multiplayer element to this game so as you, or other players, conquer galaxies, you’ll often times run into new galaxies already visited by other players, though in truth this does little to change up any real gameplay save for seeing a users name in each planets description. 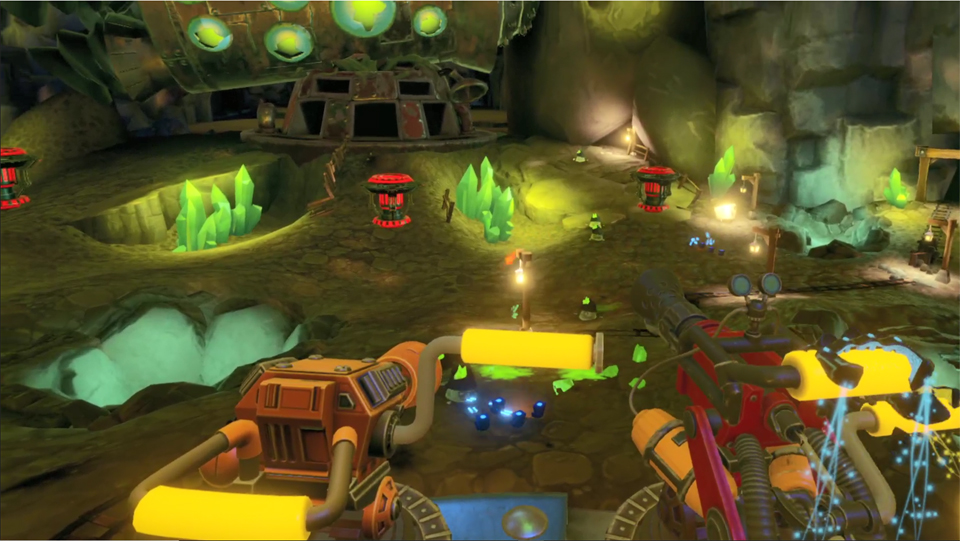 Get behind the guns and shoot some zombie potatoes.

Above anything else, I would say the presentation here is charming and fairly polished.  The spuds all animate wonderfully in your base as the move around trying to get your attention and even on the battlefield, your heroes are constantly making odd faces until they are thrown into the fray.  There are a handful of stages to choose from be it a small cavern, laboratory, factory and 1 or 2 more and each looks relatively unique and carries enough detail to be a little higher quality then your standard indie VR title.  Even in your base/ship things look spot on whether you are just checking out the spuds running around or peering at the galaxy map trying to select your next target.  Even your robotic hands look great and should something be out of reach or you run into tracking issues, you can actually adjust their position in-game, making them extend forward as if you were stretching them which I thought was a nice touch.

Audio wise you’ll be battling to a harmless background music track that never interferes with the action though in truth is also completely forgettable as the sounds of battle will grab most of your attention.  Once again, everything here is solid, matching the quality of the visuals with every spud, yours or the enemy, making little noises signifying their presence on the battlefield.  It’s never more then rudimentary sounds, but they more then do enough to get the job done presentation wise.  One side note is that on the PSVR version, I kept running into the issue of having slowed down audio effects in the home area which was really annoying. 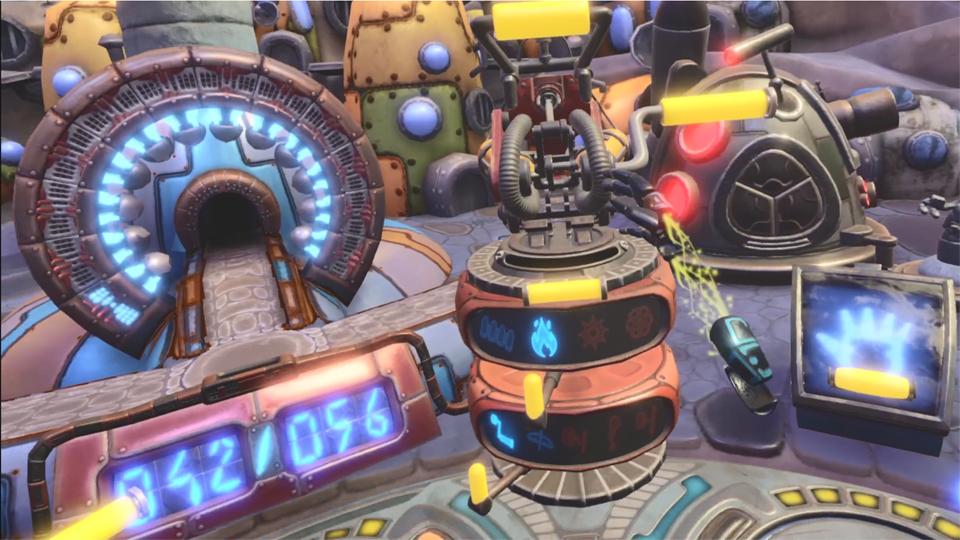 Customize your weapons to your liking.

So everything so far sounds fairly good…. right?  Unfortunately, behind that charming presentation is game lacking in any significant depth that doesn’t know when to quit.  Spuds is effectively endless and the more players that get into this game, the more galaxies will be created but no matter how many there are, they all play identically.  Each galaxy is comprised of the same amount of planets with the same difficulty levels so even though you are on your 10th galaxy visited, you are still playing on the same maps and against the same 3 enemy types over and over again.   What’s worse is that while there are a variety of maps, they all behave identically making each one’s differences visual only.   Even Hard difficulty offered very little challenge beyond the 1st few seconds of battle and once you unlock more hero spuds, weapons and upgrades for them, the game only gets easier.  Your stock guns are more then enough to handle any stage so even though you unlock more modifications which change up what your guns fire and how they fire, it’s all rendered somewhat moot, especially when you unlock the pistol mod, which lets you handle a gun in each hand dispatching anything with ease.  The overheating mechanic in here is backwards to every game that implements this as it takes longer for a gun to cooldown if you don’t overheat it then just letting it overheat whereupon the cooldown is much faster causing me to just ignore that meter and just keep firing.  Your hero spuds are customizable with tokens found in certain stages though once again, the game never gets challenging enough to need them, and while it is fun to watch them take out zombuds, their presence is more aesthetic then anything else.  The longer you play this as well, the less tokens and upgrades there are to find making just about every aspect of this game feel dull and repetitive. 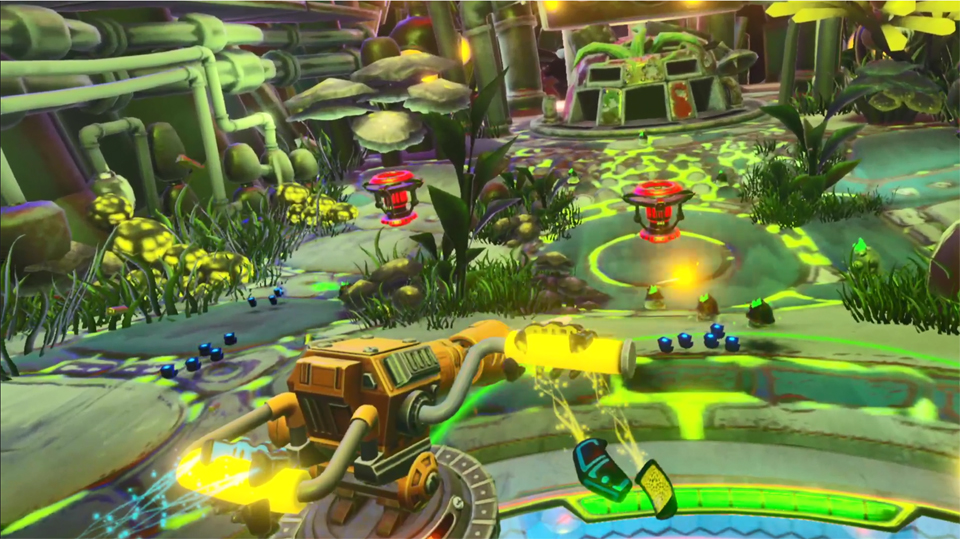 Spuds Unearthed is a game that feels incredibly underdeveloped.  The asynchronous multiplayer adds very little to game and with their being effectively no end game content, it’s just a matter of seeing how long you can play until you just get tired of it.  The initial impressions are positive but everything in here just becomes repetitive and redundant and if the game offered a modicum of challenge or variance in each stage, there could be some value in replaying stages.  Sadly, there isn’t, leaving me with a game that’s fun for about 20 min and then just keeps on going until I just didn’t care about it anymore.

What would I pay?  This is $10 and still feels overpriced.  The presentation quality is here but the lack of overall substance just had me bored more then anything else.  If it’s ever on sale for $5, it’ll kill an hour, but beyond that it’s just the same battle over and over again.

Game Dust provided The VR Grid with press codes for this title and, regardless of this review, we thank them for that!