Blasters of the Universe is a bullet-hell, arcade-style VR first-person shooter that excels in nearly every way that it should. It’s some of the most fun I’ve ever had in a VR shooter, and has almost no meaningful flaws to speak of. Blasters tells the lighthearted (but depressingly relatable) tale of its antagonist, Aldwin: an arrogant gamer, who took so much pride in beating kids’ arcade high scores that he stole a virtual reality system and used it to build an empire. This is funny, and Aldwin’s jokes are some of the most quotable I’ve heard from an antagonist. The player must shut down his rule (and his ego) by blasting massive hordes of enemies, and dodging or shielding their endless slew of attacks across four diverse levels, using fully-customizable weapons to do so. 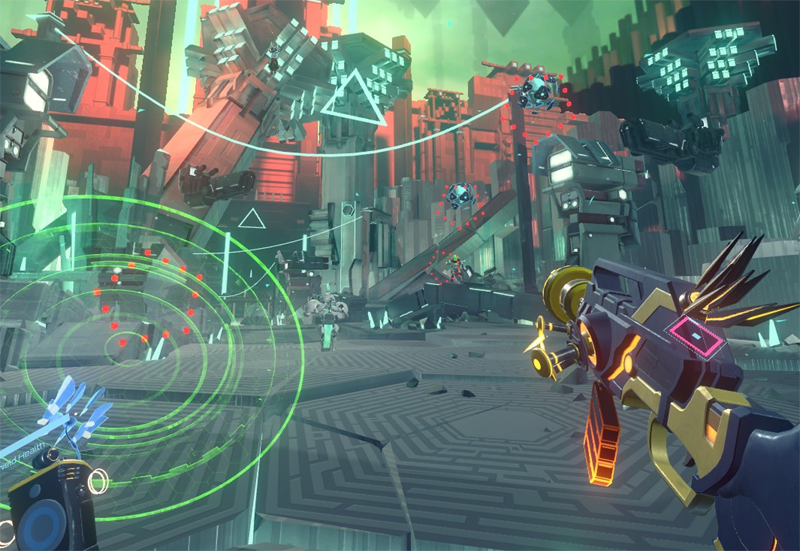 Despite being a VR first-person shooter, Blasters is the first such game I’ve played that adopts the classic, side-scrolling “bullet-hell” theme and truly succeeds with it. A huge and diverse array of enemies send vast patterns of bullets in your direction, which can be blocked with one of several unique shields. These are useful, but unreliable, as they can be easily broken. This requires you to put emphasis on dodging bullets, a bullet-hell gameplay style that truly enhances the experience. The only bullet-sensitive part of your body is your head, allowing you to narrowly weave in between them. Their trajectory allows you to, quite literally, dance in between bullets. This has you ducking, jumping, and side-stepping in a way that feels rhythmic and fun. At times, I’d find myself doing splits, the limbo, and going prone on the carpet.  Of all the stationary first-person shooting VR games I’ve played, this is the biggest workout. This doesn’t feel shoehorned in as a gameplay mechanic; it feels amazing and adds a sense of flow. Dodging, shielding, reloading, and shooting are all timed well with each other and despite being an FPS, these mechanics feel well-translated out of classic side-scrolling bullet hell games.

The dodging owes itself to the huge enemy diversity with each spewing a variety of differently-patterned bullet spreads at you. This also brings me to the game’s resoundingly successful boss battles. One being at the end of each level, they require you to present your attacks much differently than the rest of the enemies. The bosses have their own unique gimmick, each feeling tremendously different from the last. They’re also overwhelmingly sized and designed, feeling every bit as cool as I’d hope. Most importantly, their shooting style yields a separate style of dodging technique from the rest of the game, having you sidestep to an exhaustingly rhythmic pattern.

I give this dodging mechanic credit for why Blasters is, arguably, some of the most fun I’ve ever had in a virtual reality shooter. However, my fun in the game isn’t limited just to the dodging. Namely, it’s tough. Really tough. Calling it a “challenge” would be an oversimplification, as this is easily one of the hardest games I’ve ever played, in virtual reality or not. You will die, and you will die a LOT. Still, its difficulty doesn’t lead to frustration, it leads to addiction. Every time I died, I was never woeful; Rather, I was motivated to try and get further, showcasing the game’s excellent difficulty curve.

The more you play, the more skill you gain. As you become more skillful, the game becomes easier to grasp. This difficulty curve, with the aforementioned “flow,” leads to a feeling of becoming a “professional badass.” Showing off my developed skills to friends, my ego inflates to the point of Lord Aldwin’s, yelling about how cool I feel by being skilled at an arcade game. I’m tempted to say that this is intentionally ironic, capitalizing on the psychological impact of the game by linking it to the story. Was this intentional? I have no idea, but this subliminal linkage isn’t the only type of stylistic synergy that Blasters succeeds at upholding. 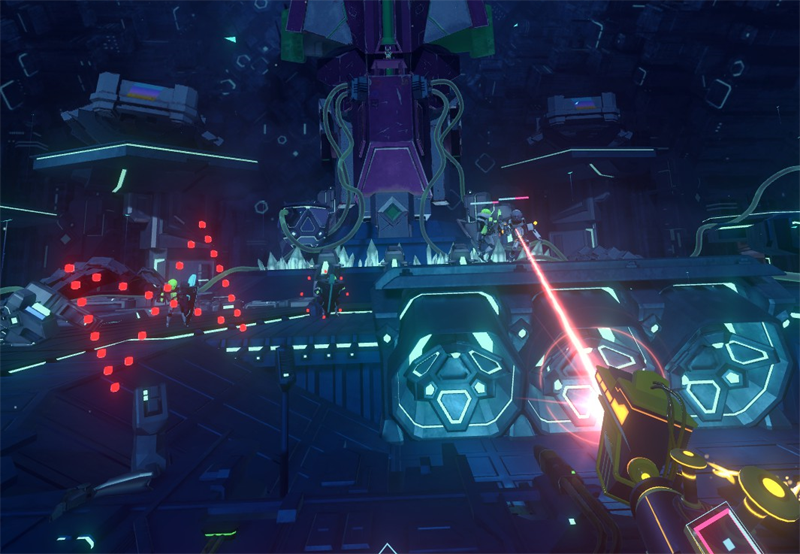 HEY ASSHOLE! YOU LIKE MY LASER IN YOUR FACE?! Screw you! Wait, what am I saying? I’m turning into Aldwin!

Enemy designs work with the art style. The colors and music fit well with the retro-arcade vibe as do the bosses with their intimidating sense of scale, and the comedic elements work perfectly. The point here is that Blasters was consistently designed with extreme attention to detail, and this shows. The developers clearly knew exactly the type of game they were hoping to release, and they evidently worked their asses off to provide just that. With this, the game is extremely unique, holding no comparisons. When I want to play a funny, retro-arcade, bullet-hell, first-person-shooting VR game, this is the only title that satisfies such a niche craving. To my knowledge, Blasters is truly one of a kind.

A great game would be nothing if it doesn’t have entertainment value: which this definitely does. Even now, writing this review, I’m growing desperate to keep playing it. This highlights another quality that it succeeds in where most VR games fail: its content value. Including a lot of dying and restarting, each of the game’s four levels took me a minimum of 2-3 hours to beat, leading to just over seven hours played before I’d experienced all it has to offer. On its own, this would be an incredible amount of content for a VR title. Each level, individually, also contains an endless survival mode option, which is even more difficult than the base game and adds a tremendous amount of replayability. When I finally get bored replaying the campaign (which I haven’t yet), I will always be ensured a fun experience with the endless mode. Better still, there are “challenge” modes. These are updated every few days with a new, unique, and overwhelmingly difficult objective, with specific weapon configurations ensuring you always have a reason to revisit.  Endless and challenge modes also both include competitive leaderboards, motivating you to keep trying for a higher score. 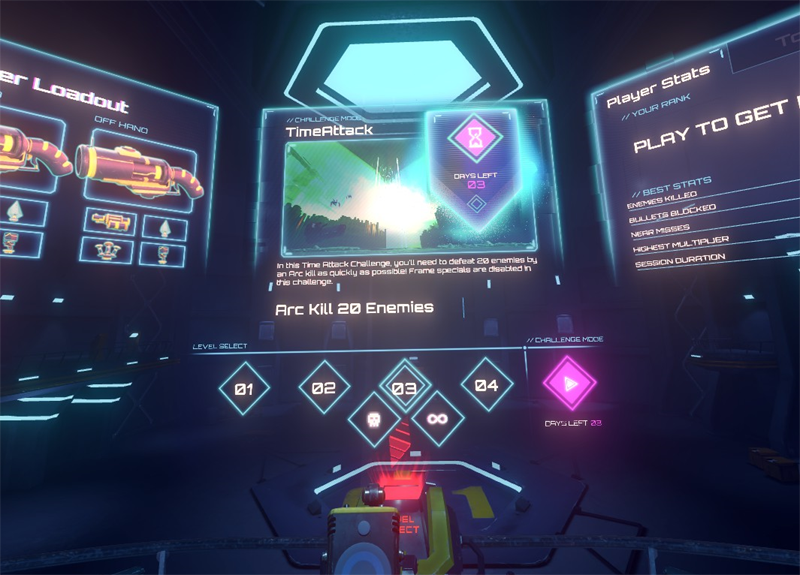 This challenge mode is not only fun, but it guarantees that months from now, you’ll still have a reason to revisit it

The only concern here is that magazine options can sometimes clash with muzzle types, both of which alter your fire rate. They can contradict each other in a way that may render your gun obsolete. This is somewhat of a nitpick, however, as this nods to the trial-and-error style of the guns you create. There’s a target range right there in the weapon customization area, so you’ll never be surprised or frustrated by finding out too late, that your weapon sucks. Many combinations do indeed prove useless, but most are still great. The diverse potential of this weapon customization is not only fun to play with, but it renders each game session totally unique. Considering the hundreds (if not thousands) of combination possibilities, this further adds an astonishing amount of replayability to Blasters of the Universe.

What would I pay for it?  Do I even need to say at this point? I’d pay a minimum of $30, and if they added many more levels and weapon parts, I’d unquestionably consider even $40 reasonable. Its asking price of $15 isn’t just a steal.  If what you’ve read here sounds fun or interesting to you, then close this review and buy it without hesitation.

The Secret Location provided theVRgrid.com with a reviw copy of this game and, regardless of this review, we thank them for that!