Bringing over classic genres and games to VR is awesome.  With so much potential to turn a great experience from the past into something that feels fresh and new, it’s releases like this that have me looking forward to every yester-year inspired game brought to the modern VR age.  Unfortunately, the transition from old-school gameplay mechanics to modern day VR isn’t always a smooth one. 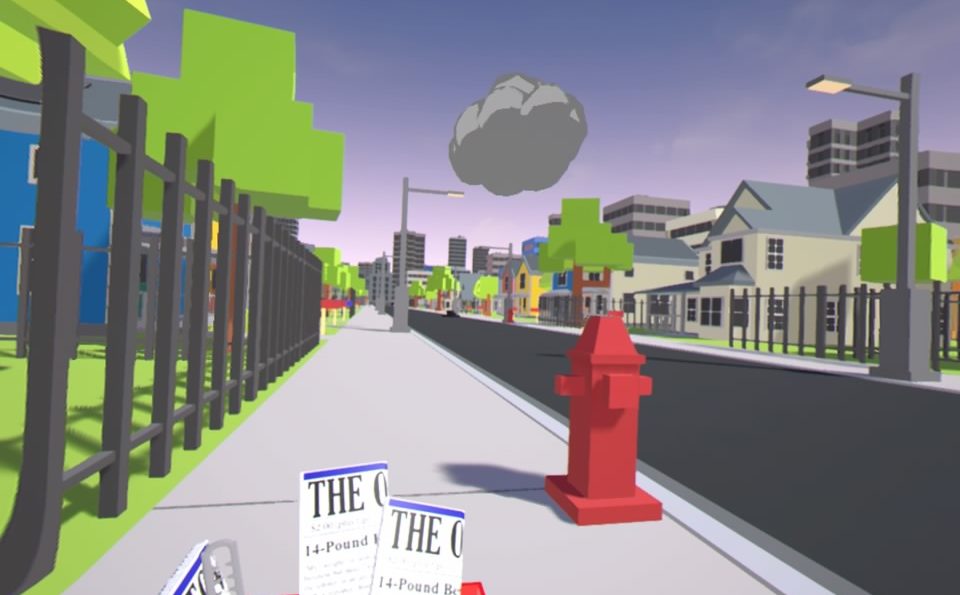 The visuals here are cartoony and fun…oh and that cloud is about to murder me.

For those unaware, Paperboy is game that was released a little over 30 years ago and has since been ported and remade so many times it’s hard to keep track.  The games purpose was simple, deliver newspapers down a street while avoiding a slew of ridiculous hazards.  That exact gameplay has been brought to first person and in theory should make for a fun retro experience but a few game design choices and glitches may frustrate more than a few players.

Meerkat Games offers us 2 different control methods, DS4 and the Aim controller, sorry no Move controller support here(yet).  Both methods utilize only head tilting to turn your bike as in tilt your head to steer left or right. The recent addition of a steering sensitivity option makes the game more fun and challenging.  Coupled with that is the need to look where you want to toss your paper while using a DS4 controller.  You end up drifting where you don’t want to, and with increased sensitivity, you could drift far so find the setting that works for you.  The Aim controller fairs a bit better as you get a paper shooting gun which you reload by dipping it into the basket on the front of your bike.  The biggest advantage with the gun is the ability to shoot at your targets without looking, allowing for a more controlled ride.  Most of my play was done with the aim controller.

A recent patch has eliminated the repetition I derided this game for in my original launch day review.  Now each stages hazards change up a bit, forcing you to be a bit more on your toes and ready to react.  Delivering papers successfully requires you to leave a paper on the lawn, porch or directly in the blue mail box in front of the property.  Every successful run opens up more houses you must deliver too, changing the mail boxes from red to blue.  Playing through 7 stages unlocks the next street section and extends your paper route and the length of each run, all while avoiding and/or shooting at obstacles. 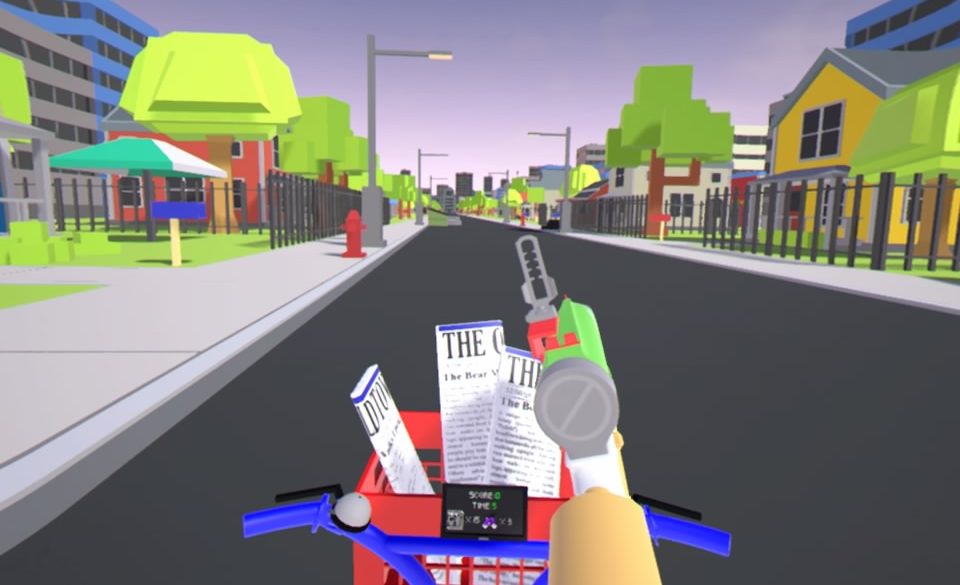 The Aim Controller/Paper Gun relieves a few problems, but to many more still remain.

Inspired by it’s 8-bit originator, the levels design is blocky, reminding of games like Crossy-road.  It’s an alright look for the game, but stages still come across bland and lack a lot of detail.  Character models carry an exaggerated cartoonish look with break dancing Elvis’s, protesting Rastafarians, old ladies and more peppering the streets.  There is charm here, though you will see the same few models over and over with some being a little on the stiff side.  Obstacles littering the landscape range from piles of wood to tornado’s and other more insane problems that are humorous at times, all them carrying the cartoonish art style.  The audio is nothing to special with a few slightly annoying retro tracks and sound effects that accompany the actions taking place.

Throughout the levels you will be required to pick up stacks of paper to replenish your supplies.  Originally these stacks were hard to notice in time to steer your tank-like bike to get them forcing you to just run out of ammo and continue until the next bundle pops up.  Thankfully, these stacks are now highlighted by a burst of light, allowing you to plan further in advance the route you’ll take to get them and paired with the tighter turning, this is no longer an issue.  Every time you hit an intersection, you must choose to brake or continue at your regular speed.  The problem is it’s impossible to tell which action you need to perform, forcing you memorize the traffic pattern or just pray.  Tornado’s are an absolute nightmare as they appear before you, chase you down and throw objects at you, even after you have past them, making them feel incredibly unfair.  Death results in an immediate respawn a little earlier in the level, and still placed me in front of obstacles forcing instant death and an eventual level restart, though this does seem to happen less now. 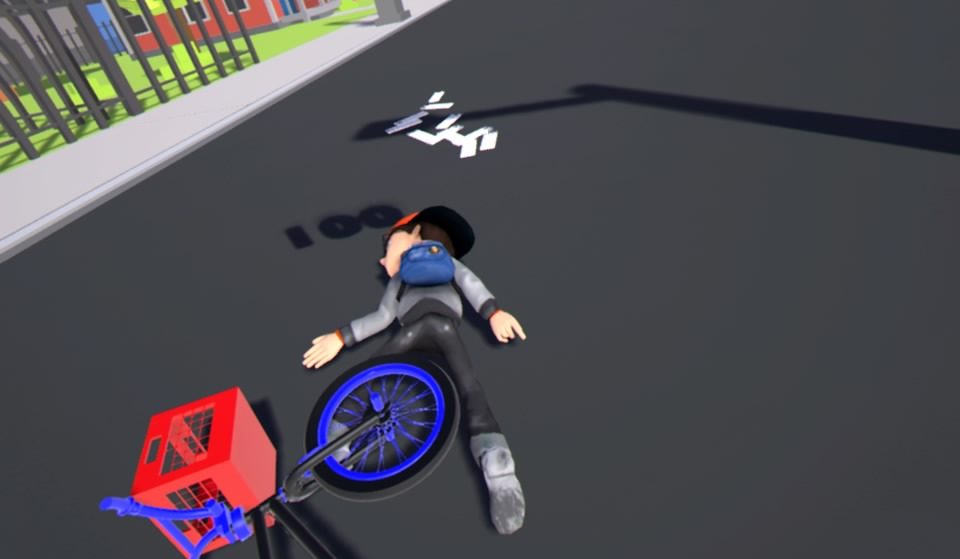 Every time you get hit by a car you get the nice visual of the paperboy, lifeless in the street. It’s actually a little morbid.

A second game mode is available with the only difference being that you must throw the blue or red paper in the corresponding red or blue mail box.  With 28 Levels to power through over 4 various stages as well as a boss-type level at the end of every 7 days/levels there is a fair bit of content here, though this may be best played in small doses to ensure you don’t get to sick of it. Upon starting the game up, you can start at the same stage you left off, which is nice.

The latest patch remedies many issues though some still remain.  The turning sensitivity is most welcome, but you’ll need to experiment to find what setting works best for you.  Occasional missed collision detection had the game saying I missed shots when I didn’t.  Respawn insta-deaths can still occur, though less frequently and some environmental obstacles feel unfair.

All that said this is much more playable than it was at launch and offers up challenge that is more fun that frustration.  With a few more patches and a few more tweaks this could be a game you would want to show off to family and friends.  It’s casual, challenging and offers relatively short runs allowing for some local headset sharing should the situation arise.

What would I pay? This is a minimalist VR experience, but with the recent patch I’d have no problem dropping $5 or $6 on this.  It’s has that ‘just-one-more-time’ hook and though death can feel a little unfair at times, more often than not it’s lesson in what to be aware of on your next run.