The universe awaits in this little space shooter as you navigate through asteroid fields while defending your ship from attackers.  Downloaded from the Oculus store for $7.99(free! in the Google Play Store), if you’ve played any turret shooter you will be instantly familiar with the mechanics used here.   With so many space shooters in VR, let’s see how this one holds up. 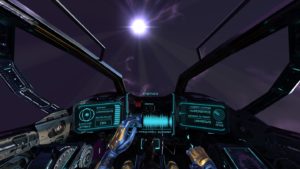 This game starts up on a mission where you are assailed by an unknown enemy and barely survive.  The turret/ship you are in look really good with crisp, clean visuals.  Inside your ship are monitors that are easy to read and change depending on the situation they are in.  Superficial additions like that add a lot to the experience.  I’ll also give bonus points (not really) for being able to see your body which is a nice touch that a lot of first-person VR games don’t include.  Outside of your ship is a different story.  Space is littered with asteroids and other elements that from a distance look great, but up close become messy blobs. Your area of flight is limited by a visible barrier so exploration is very limited. The audio here also stands out compared to many games in the oculus store with a lot of dialogue added in between mission and even during the actual levels too.  Effects sound like they should with guns and other effect fitting in perfectly with what you are seeing.

Controls are where this game shines, utilizing all the available options that the gear VR has.  With that said though, I can’t help but feel this game would be better served with a controller as those options are still limited.  As is typical, holding your finger on the D-pad fires you weapons while swiping in a particular direction switches or reloads weapons.  It works, but the delay in swiping and the tiny amount of ammo per reload you have for your main gun make some battles feel very unfair.  Each level consists of 3 parts and navigation/shooting area where you are required to fly around obstacles while shooting and flying where you are pointing.  It can be a little tough as you don’t control your speed so that also gets hectic.  The second part is a simple math puzzle that becomes harder than it initial seems.  The final part has you manning a turret while your ship is on auto pilot so you are free to shoot away, but as I said before, controls can hinder your progress. 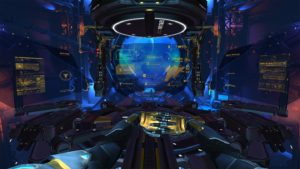 Nice menu’s and character animations add the immersion in this game!

Overall this is a decent experience, especially for those that don’t have a controller.  With that said, if you’ve played other Bluetooth supported shooters, you may feel wanting.  The added audio and cut scenes are great and noticeably absent in other games and being able to see “your” body helps with immersion.  Levels are short so replaying after death isn’t a huge deal and a few subtlety’s, like enemies colliding with asteroids, give this game its own unique feel.  I highly recommend you check this out if you are stubbornly holding out on purchasing a Bluetooth controller.  But if you are looking are for the next Anshar Wars or End Space, you may want to look elsewhere.