Brain Beats is the follow up title to Mind Labyrinth VR Dreams and while on the surface looks very much like many other VR rhythm titles, is geared more towards stress relief and physical activity tailored to whatever mood you are in.  The developers behind this game state that Brain Beats has been designed by a team of psychophysical wellness professionals with 3 stages of difficulty designed to just let you chill or get the blood pumping. 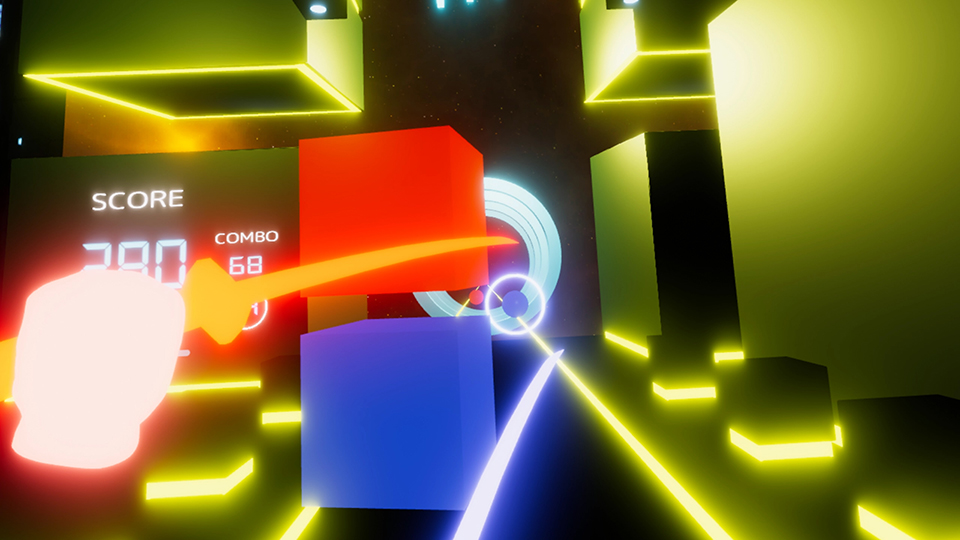 Beat Saber was definitely an inspiration for many aspects of this game.

Like most rhythm titles, you must hit incoming-colored notes with the matching-colored hand, left being red and right being blue.  Circular notes come at you from high and low and need to be hit, with your score increasing thanks to combo modifiers for not missing beats.  Beyond just hitting the singular notes with your hands is the need to swap your hands for swords to swipe the same-colored square shapes that come at you.  Furthermore, are large, orange or white, circular and square shapes that need to be hit or slashed using both hands.  A brief tutorial explains all of this too you and than your off to experience the game to your liking.  There are 27 tracks to choose from spread across 3 difficulties, though that means there is at most 10 tracks per each challenge level with an additional “slow mode” available that appears to just remove half the beats you need to hit.  Easy mode offers an incredibly relaxed experience with medium offering a modicum of challenge and hard providing a decent little workout.  Attached to each song are local leaderboards as well as calorie counters that show you how many calories you can expect to burn during that track.  Additionally, you can create playlists from the included songs which tallies the calorie counter so for those looking to keep track of these things, you can. 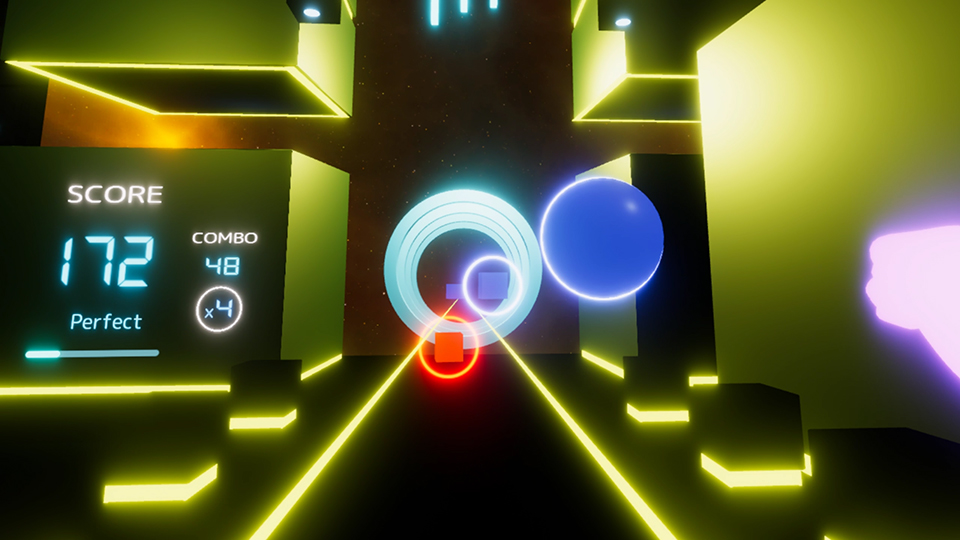 Punch the spheres, slice the cubes!

Whether intentional or not, Brain Beats looks like a much more simplified version of Beat Saber with a singular background that illuminates, and changes color based upon the difficulty and track selected.  It’s little more than some neon rectangles with some sort of cityscape in the distance but looks alright.  A sound bar far away in the background pulses to the beat with the occasional laser show turning on to spice things up a bit with a scoreboard to your left that keeps track of your score and combo meter.  Those shapes that come at you are distinct but come off looking flat and boring with monochromatic colors that look quite dull when compared to the vibrant background.  Those shapes still do the job and don’t look terrible by any stretch, but besides the 2-handed shapes, just look drab.  Nothing in here looks awful but overall, it lacks much in the way of originality and comes off as uninspired, but adequate.

I did appreciate the variety in the music tracks with the song covering a lot of genres from disco, jazz, electronic, rock and few more (no country thank gawd) with some very slow and melodic songs found on the easy difficulty and more upbeat tracks on the harder ones.  Not every song is a winner, and most are instrumental though I did find their dynamic range a nice change of pace from other games in this genre.  Unfortunately, if you want to up the challenge in this game, you just won’t be able to experience all the music in here leaving the track count quite small for those looking to test their rhythm game skills. 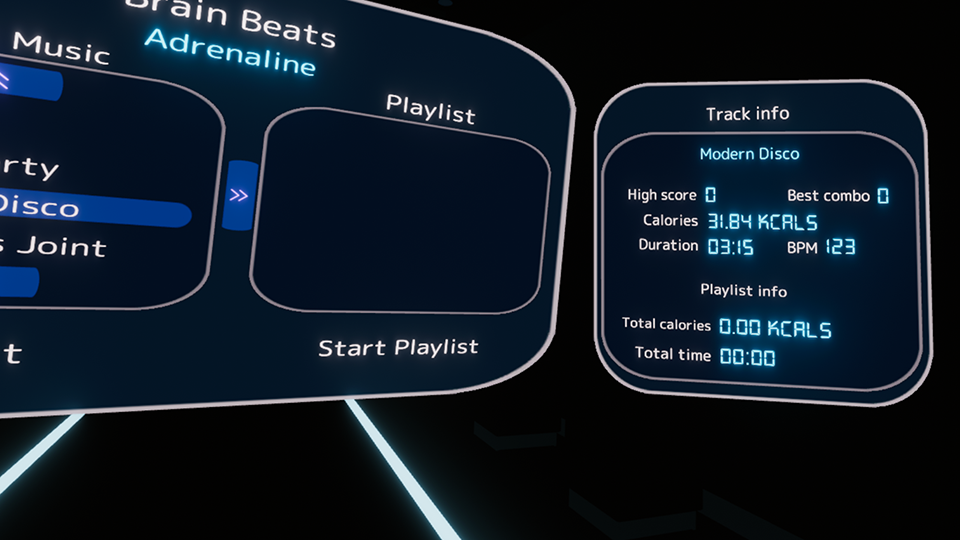 Each track and playlist shows your potential workout info.

I wasn’t sure what to expect from Brain Beats as it definitely looked like little more than a Beat Saber clone and in a few respects, it definitely is.  That’s not necessarily a bad thing and Brain Beats does try and do a few things differently that I did appreciate.  Having to change from fists to swords on the fly can be incredibly challenging and having to use both hands for some beats adds a nice dynamic as well.  Unfortunately, those looking for significant challenge will be stuck with only 9 songs on the hardest difficulty as even on medium, the songs were fairly easy.  To add to the replay factor is that each time you play a song, it offers up a different beat pattern.  Those beats will still occur at the same points in the song but could be any of those beat types I mentioned so each time you play a song, you won’t get the same beat map.  This means that you can’t really practice each track which extends replay value but also means that every track sort of feels the same.  Still, on the hardest difficulty, I was having a fair bit of fun as the pace can get frenetic and challenging making for a nice little VR workout.  The other difficulties are really only for beginners or for those looking to unwind though in truth I found these to be slow and boring though maybe I just don’t have the right mindset for slower paced rhythm games.  The calorie counter is also bare bones as there is nothing in the game to keep track of the calories burned beyond just what each song is estimated too, so if you are concerned about those things, get out a pen and paper as you’ll have to keep track yourself. 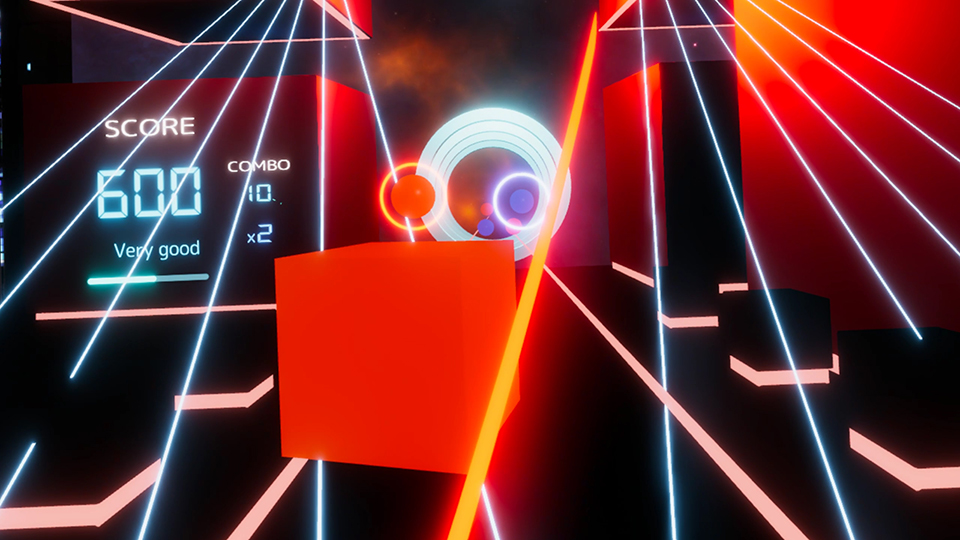 I really enjoyed Brain Beats when I played on the hardest difficulty and plan on adding it to my VR workout regime as it made me move quite a bit.  However, it won’t be something I play as often as other titles thanks to the small track list and repetitive nature of the beat placement.  I can’t really speak on the slower paced tracks as they really aren’t my jam but for those looking for a laid-back rhythm game or maybe have mobility issues, this could be up your alley.  Additional DLC is planned though at this time it’s unclear if it will be paid for or free content.

What would I pay?  Stand alone, this is $15 US which I think is still too much given just how selective the content could be depending upon what you want from it.  You can get this in a combo with Mind Labyrinth or as DLC for the game for $10 which is better, so I think if you dive in knowing it’s a budget rhythm game than you might me pleasantly surprised by what you find in here.

Frost Earth Studios provided a code for this title and, regardless of this review, we thank them for that!