So, at this point if I were to say, ‘we have another stationary wave-shooter!’ you would probably cringe as that genre has seen more than a lot of releases across all the VR headsets.  Due to this fact a game needs to stand out in some way or be lost in the ever-increasing pile of mediocre titles.  Enter Singularity 5, a wave shooter that places in you in a near future version of Paris that tasks you with taking on hordes of enemy robots and destroy the AI controlling them, know as the goddess. 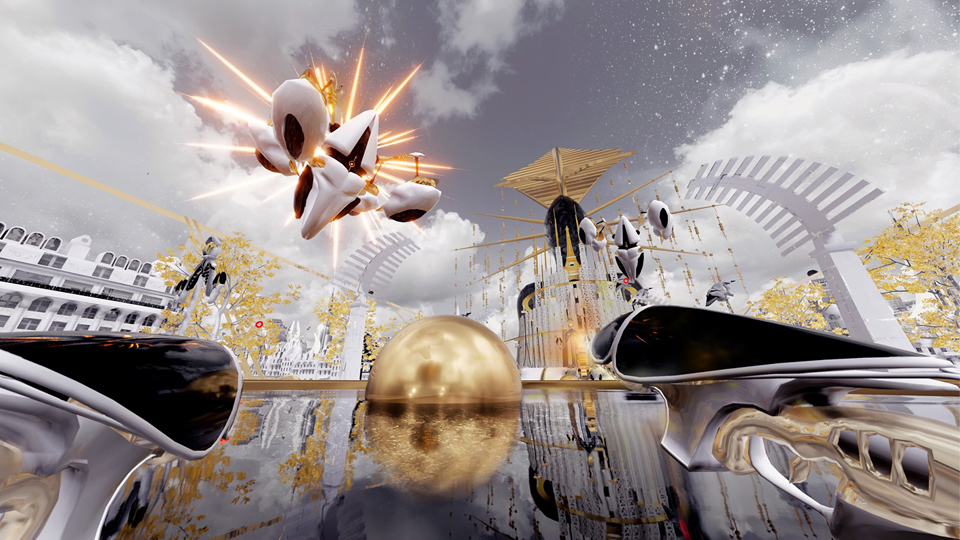 Like any stock VR shooter, you have 2 hands, each holding a weapon for some dual-wielding action.  You start off with a pair of futuristic pistols, and as you proceed through the 5-stage campaign, you’ll accrue a couple more all with infinite ammo, though each still requires a reload once you burn through the ammo.  What Singularity 5 does to separate itself from the pack gameplay wise is allow you to spawn as many grenades as you want and besides just destroying guys, you may have to clear crystals that the enemy robots try and surround you with, which can obstruct your view.  It only takes a simple swipe to move the crystals aside, but when you are surrounded by enemies both high and low and they are unleashing all hell in your direction, the extra second it take to swipe at those crystals could be the difference between life and death so it’s best to dispatch the enemy before they can harass you with those formations.  Whenever enemy projectiles get to close to you, time slows down allowing you to knock those explosives out of the way or back at the enemy which I thought was a fun little touch.  Each stage has a checkpoint system so should you die, you will restart at the last checkpoint to try again.

The gameplay is solid enough, but where Singularity 5 shines is its visual design which is just striking.  Starting off in a giant elevator, the 1st level didn’t impress too much, though I did like just how tall the elevator looked, and the robots you face all look unique enough as they unfold in front of you but it was the second stage, and the ones after that just struck me with their unnerving beauty.  The levels all feel very clean and sterile, but are just amazing to take in.  The stages consistently move forward so you never get to settle on one area too long which is great as each scenario never wears out its welcome.   Each stage feels like it’s part of a dystopian future where robots now rule and from beginning to end, the look of this game continued to impress me. 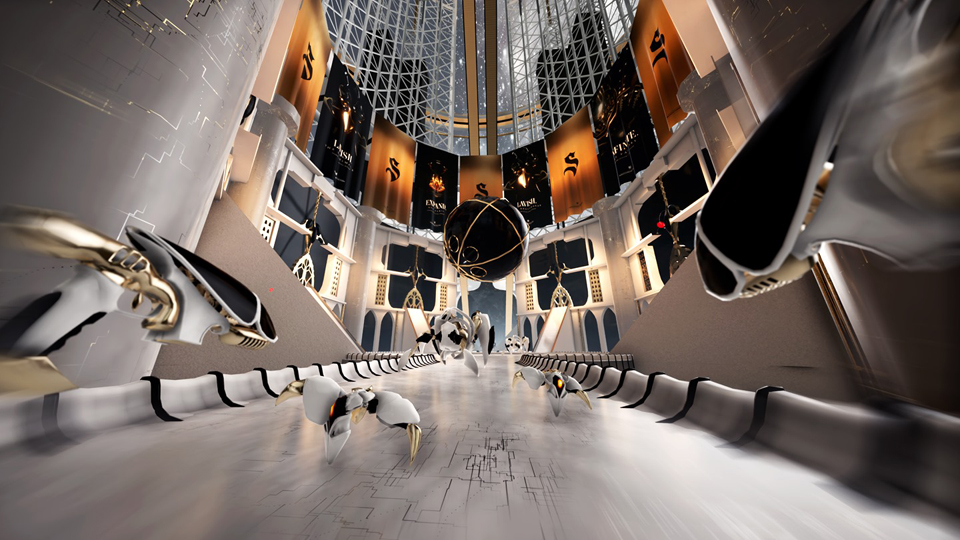 The enemies rarely give you a second to relax

On the audio side the weapons, robots and attacks all sound as they should and never ruin the action but that standout for me is the soundtrack.  I have no idea what the genre of music is here,  it’s some kind of electronic and trance but with crushing tones that never let me feel comfortable yet add so much depth the visual element.  I was enamoured with Singularity 5’s presentation, which is near flawless really, and this was a welcome breath of fresh air when compared to every other shooter I have ever played.

Like SUPERHOT or Blasters of the Universe, Singularity get’s intense and physical, even though you are just standing in place.  You can dodge or deflect incoming attacks, turning portions of this game into a slow motion dance. when you are trying to shoot enemy weak points and swiping away at those damned crystals the enemies place in your way, Singularity 5 can be physically demanding at times, especially in the latter 3 stages.  There are 3 difficulty options available and even the easiest one offers a fair bit of challenge with an emphasis in the game being on score chasing as the main menu showcases your scores for each stage and your game total.  Combo attacks reward you bonus points so it’s best to master chaining together your attacks for a maximum score. Each stage can be beaten in roughly 15 to 20 minutes making this a rather short game, but I appreciated that as the game never wore out its welcome and when I beat it, I was more then satisfied with my journey through this oddly cool dystopian world. 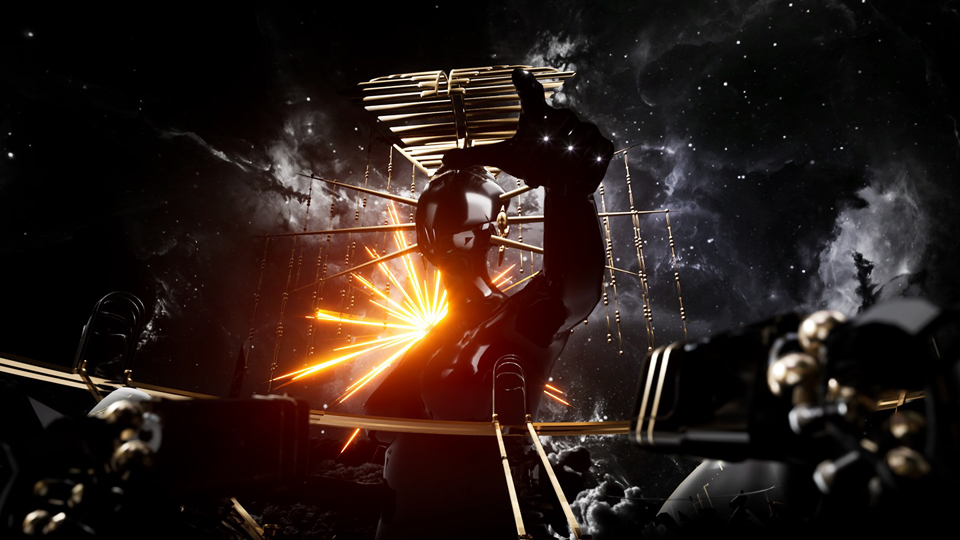 The goddess is not to be trifled with!

The action is intense, the mechanics are refined and the presentation and art-style is stunning.  Even if you can’t stomach another wave shooter, I urge you to consider Singularity 5 as the aesthetic alone adds a fresh take on VR wave shooters.

What would I pay? $10 is an easy ask.  It doesn’t over stay it’s welcome and delivers a whole bunch of awe-inspiring moments along with some solid shooting action.

Monochrome Paris provided The VR Grid with a press code for this title and, regardless of this review, we thank them for that!