RADtv is one heck of an odd-ball collection of micro-games designed to test your skills in a variety of ways.  The core of this experience in centered around swapping the headset with friends in the room, challenging them to get the highest score or quickest time in 1 of 25 mini games but don’t worry, if you want to lone-wolf it, you can do that too. 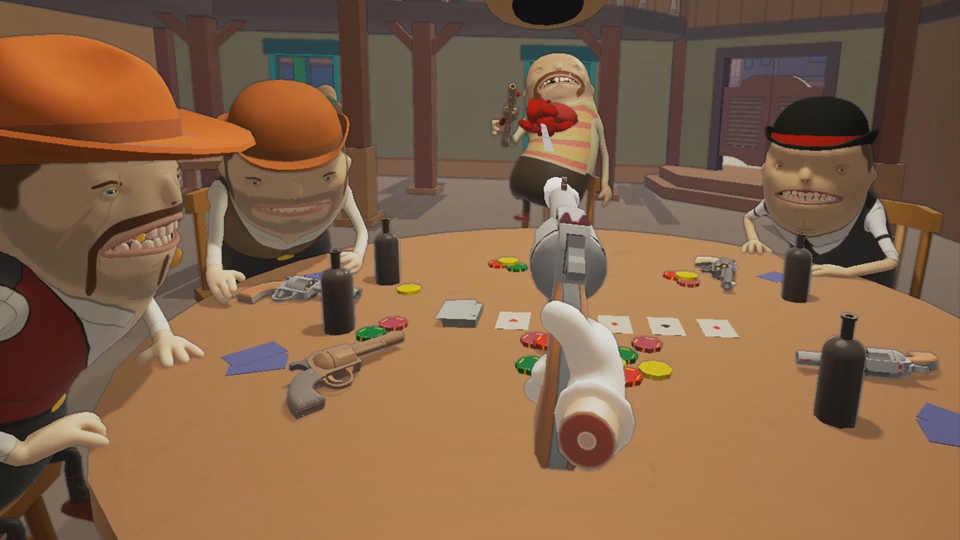 Your job here is too shoot everyone at the table.

In job-sim type fashion, you’ll have 2 hands to mess around with whatever the game throws your way.  Each game really only lasts no more then 5 to 20 seconds making each attempt all to brief, but allows for those in the room to stay focused and not have to wait more then a few moments before their turn is up, which is a great  thing.   Each mini-game is it’s own beast and tasks you with a variety of actions from throwing records at zombies, eating as many burgers as you can off a plate in front of you, playing baseball in prison, cutting corks off of bottles with samurai swords and a host more whacky situations. Beyond the competition is some extra challenges each stage has and if you achieve all 4 you unlock a new skin for your virtual hands as well as just enjoying some extra chaos as these objectives are more about messing around then anything to do with the individual games goals.  Of course, there are local and online leaderboards to further test your skills should you care. 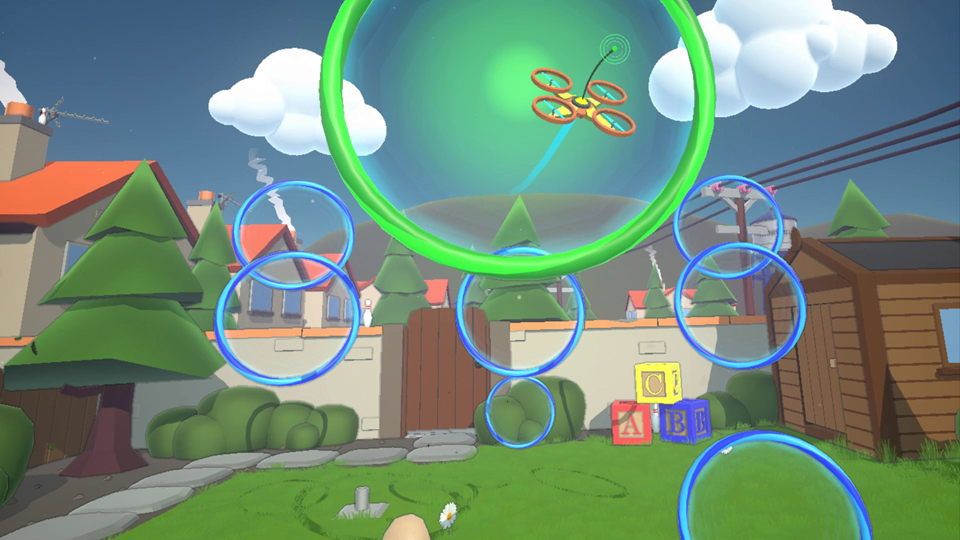 This stage is damned tough!

The premise here is that your TV has come to life so while you are sitting on your couch, said TV grows arms and legs, tosses you the remote and urges you to play while dancing in front of you.  Coinciding with all that craziness in here are some equally nutty, and sometimes disturbing pill shaped character models.  The people in this game all look pudgy with stretched out faces that just come off as creepy but given the light nature of most of the games, there is an odd charm to their look.  You’ll find yourself in a wide array of settings from backyards, Japanese game show sets, an old west saloon, restaurant a few others with everything looking surprisingly polished.   What the game lacks in detail it makes up for in clarity, design and variety and when I say this lacks detail, I’d say that’s more of an artistic choice that benefits the cartoonish look, which almost always pops in VR anyways.  Beyond the art style is also some relatively impressive physics which almost every game uses in some unique way.

Besides that opening tune the TV dances too, most of these snippets of games have some light-hearted tunes though as most games last no more then a few seconds, it’s more the audio effects that keep you entertained and they do be it grunting zombies, people getting shot, glasses breaking or anything else with everything sounding exactly as it should, which is great. 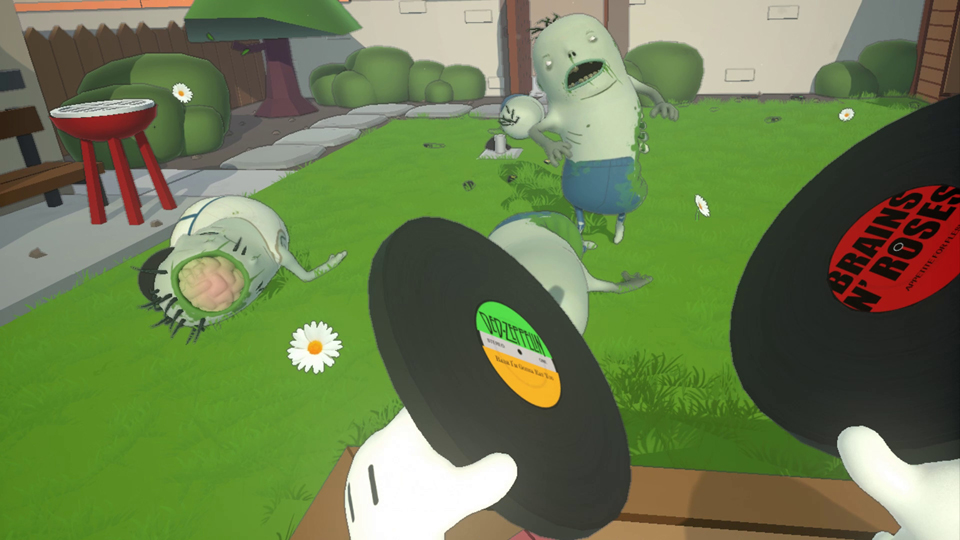 I appreciate the cinematic nod in this stage!

RADtv impressed the heck out me with it’s solid presentation and variety in game types though I suspect that some might find these games too short which does add to the replayability in some respects but at the same time, I wouldn’t have minded if some of these stages had a little more depth and longevity.  Don’t get me wrong, I enjoyed most of these games but many felt like they could have been fleshed out into larger games whether it’s just shooting cowboys, driving RC cars, backyard bowling or many others.  The variety here is impressive, it truly is, and every game is designed for 1 quickplay and I get that, and it works, but I would love to see extended game modes, at least in the single player portion of the game.  The physics as well don’t always work in your favor, especially with any of the games that require throwing but they are in no way near being broken and honestly, I’m so used to wonky throwing in just about any VR game that attempts it, that this is on the same level as some of the best games that utilize tossing in VR.  Some of the game specific objectives also seem near impossible but they do offer up the most replay value beyond just besting your besties. 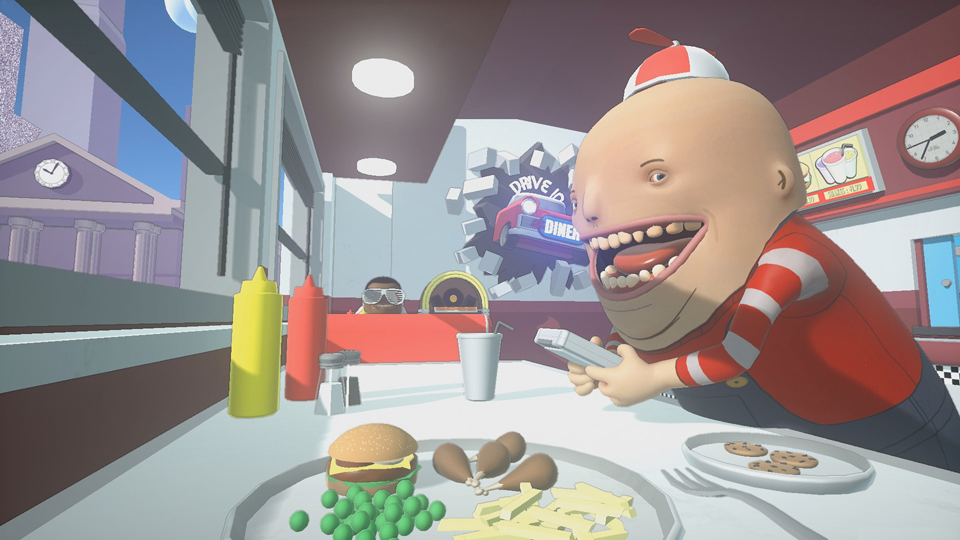 See what I mean about creepy.

RADtv pretty much nails what it sets out to do and is definitely best played with friends but even if you were only interested in playing alone, enough of these games are fairly addictive and fun with the stage goals offering plenty of reason to keep trying just one more time.  It really a great use of VR showcasing many of the cool game types that VR can do from casual binge eating to full on drone flying and I bet once you pick this up, you’ll be had pressed to put it down.

What would I pay? I’m totally cool with the $10 US asking price on this and had a fair bit of fun trying to conquer every micro game in here.  They aren’t all winners but a majority of them are damned fun and the next time I have gaming get together, I’ll bringing this one out to play.

Ruffian Games provided The VR Grid with a press code for this title and, regardless of this review, we thank them for that!