If you have ever played and enjoyed games like Skribble or Drawful, then Puppet Fever is the next level of “drawing game”, only in VR.  To be more precise, instead of drawing you get to move some puppets around and recreate a scene based on a sentence or a word given to you by the game in order to let spectators guess what it is. Whoever guesses the majority of the cards and gets the most points wins. 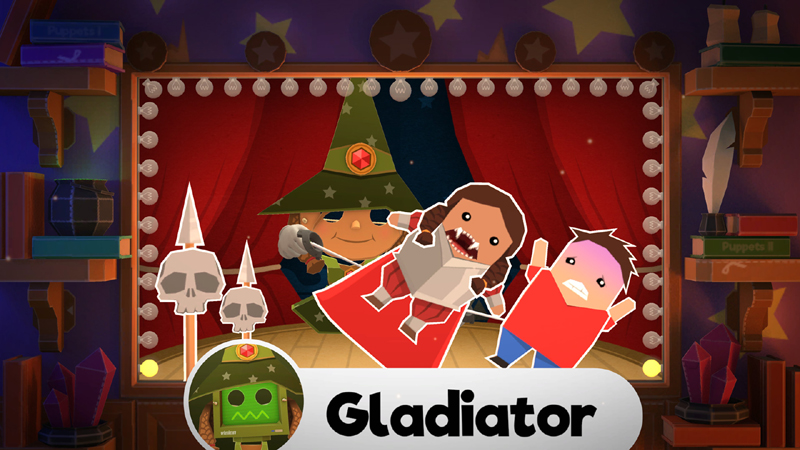 Let’s talk about how it works. Divided by turns, each player will wear the VR headset and decide between 2 different cards (a card can have a sentence, a word or a name on it), the cards can be either green or yellow with the yellow ones being worth more points. After choosing the VR user will be able to control some puppets in an effort to mimic the action written in the card.  People not wearing the VR headset will be able to look at the PC monitor and see the puppet stage as spectators. The spectators will keep on guessing until someone gets the right word, ending that round and giving that player the points for solving it.  The game will go on based on how many rounds are decided before starting the game.

The game can be played with friends in the same room as explained above or can also be played in single player with bots. The bot mode is not really satisfying and feels more like a mode designed to teach you the basics of the game and maybe practice with it a little bit. Otherwise the game can be played on platforms like discord with the support of the use of the share screen which includes voice chat interaction. 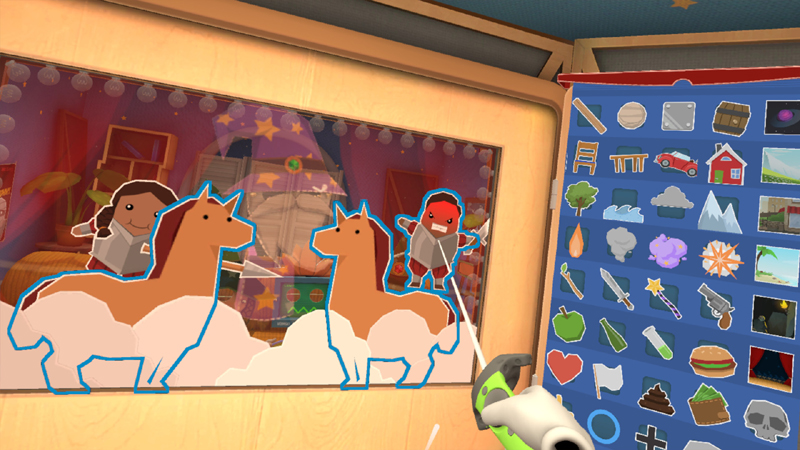 You have plenty of options to make your scene!

The graphics fit nicely with the game style, a cartoonish look is exactly what this VR game needs. Every puppet has some clean and simple animations, and you also have the possibility of changing their expression and giving them objects to reproduce better the word or phrase given. And to complete the stage you can also add in backgrounds just to increase the presentation of your little mini puppet shows.  A really nice touch has been added at the end of a round where all the completed words are shown in a slideshow with the recreated scene, along with the option of saving these pictures locally on your computer or even uploading to twitter for your viewing and sharing pleasure.

Puppet Fever runs smoothly as I never encountered bugs or frame drops while playing (roughly 3 hours so far).  I would just change the amount of people that can be added as spectators, for the moment only 4 players can play together (3 spectators and 1 puppet master).  The only other downside that I found in this game is a potential language barrier.   Some words are really easy while others are quite hard to be guessed by non-native English speaker because they express concepts that aren’t existent in other languages.  This could maybe be solved by the simplification of those phrases or by adding some more hints about the current card. 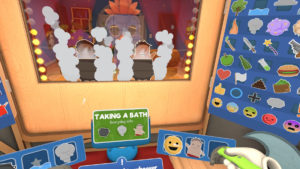 “2 men being cooked alive!”…That would be my guess!

The pool of words and sentences is not too big, there are around 500 cards available currently, but it’s already enough to have fun for multiple hours without replaying the same ones. Also, the game is still in early access, this means that most likely they will add more in future updates.  This game is the perfect example of a local party game and easy to pick up and play if you are spending an evening with your friends guessing while relaxing on the couch.

What would I pay? I think that the current price is great considering what the game currently offers.   With the possibility of adding more players to a match, more cards and more objects that you could include in the scenes, I would pay a maximum of 19.99 Euros.

Coffee Stain Publishing provided The VR Grid with a review code for this title and, regardless of this review, we thank them for that!