Flappy Bird, the most influential game of the last decade has finally made its way to VR.  Maybe that’s a stretch, but the comparison alone should give you a pretty good idea what to look forward to in this title.  It’s a ‘Endless Flapper’ clearly inspired the mobile classic(?) only now it’s in First Person and you have few more options to change up the gameplay. 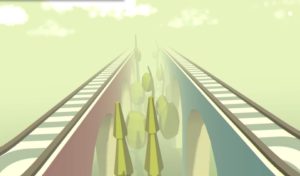 Flying high can give you a break, but hurt your score as well

There are 2 modes on control here; DS4 or 2 Move controllers.  The Dual Shock method works as you’d think, press a button to gain a little bit of it air, press it more to gain a lot.  Additional option like diving and moving from left to right spice up gameplay, as well as power-ups and coins to collect to jack up that score.  The move controls are much more of a mixed bag.  So while you can still press ‘X’ to flap your wings, now you have the ability physically flap your arms to get some air.  It works most of the time, but on occasion, my motions seemed to go undetected causing death.  Add to the flapping all the other controls and it wont take long before you find yourself pressing the wrong button and crashing.

Either control method works, but will take time to adjust to and regardless of that, the DS4 just feels more responsive and easier.  The Move controls, in my mind, lend themselves well to a party setting where you and some friends can see just how long each of you can fly before inevitably flying into something or getting tired.  There are rest periods in the game, to give your tired arms a break, and they will get tired if you decide to flap them.

The visuals leave a lot to be desired with different, monotone shapes comprising the world around you.  Everything is very minimalist, which does work well enough, but it just gets boring to look at after a short while.  Environments change up based upon the bird/level you choose as well as how long you stay in the air.  A few areas in each level carry some animated moment, like a train driving past you, or an opening umbrella in your way, but for the most part are comprised of still objects to avoid.  The audio is sparse with a few simple effects peppering the game and a friendly little tune that you’ll forget about almost instantly, which is perfect and way better than one that would annoy you.

Abilities (specific to each bird) include invulnerability or a dash, which blasts you forward in the level, a temporary magnet to help collect coins and a few others.  Power ups are of the same vein, though lasting way longer and if you are shooting for a high score, then you need to pick them up.  They help mix up the gameplay and increase your score, also breaking up the monotony of the game.  Ongoing challenges as well force you to mix up your play style with simple objectives, like diving from above the clouds, allowing you to unlock more birds/levels upon completion.  Harder missions, like flying through holes, require much more finesse and will have you struggling not get mad at the imperfect controls of the game, though keep trying and you will accomplish the required task.

I did have a few issues while playing.  For one make sure which ever control method you want to use is on before you start the game, or you’ll be restarting it right quick for the controller to register properly in game.  Secondly, switching control types in game is supposed to be flawless, but I experienced a glitch, on more than one occasion, where the game didn’t recognize when I hit my right trigger button on the Move controller, causing me to be unable to move right.  Loading times were a little on the annoying side, especially when navigating back to the menu.  Finally, some in game glitches, like coins floating in front me blocking my view as well as over sensitivity on the D-Pad had me dying on more than one occasion.  Use the triggers instead, it’ll save you some grief. 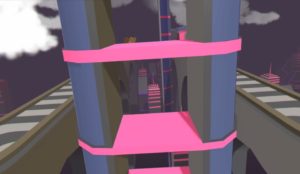 This is going to come down to how much you love pushing yourself to get better and repetition.  Control issues aside(which will hopefully be patched sooner than later), you will be playing stages over and over and over, and while they are procedurally different every time you play, it won’t take you too long to before the feeling ‘like you have done this before’ sets in.   This is meant to be played in small doses and will drive you nuts, especially when you first start playing.  That said, there is a pretty strong sense of satisfaction once you start crushing top scores and flying into all the collectables.  Playing with a group of friends with move controllers enabled is also a sure way to get the most fun you can out of this title.

What would I pay? $8US tops for me personally.  There is definitely fun to be had here, but there is a lot of frustration as well.  Combine that with the less than stellar visuals, occasional glitches and repetitive nature of the game and it just feels more like a slightly bulked up mini-game.

Kaio Interactive provided thVRgrid with a review copy of ‘Leave the Nest’ and regardless of our score we are thankful to them for their generosity.