Panzer Panic is the Gear VR answer to World of Tanks, but the technology behind the headset may be holding this game back.  Downloaded from the Oculus store for $5 is a single/multiplayer tank battle game that does that has some positives features, but falls short on many more. 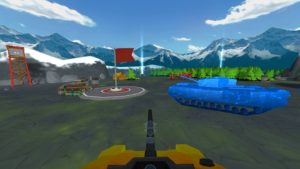 The visuals here are just not fun to look at

This game aspires to be something great, self described as “thrilling multiplayer” it unfortunately is missing a few features.  The biggest problem is that the multiplayer matches are only 2 vs 2.  It may be multiplayer, but it feels lonely.  No mic support and only 1 team mate makes coordinated attacks next to impossible.   Oh and the multiplayer is local only which mean you are going to need friends on the same WiFi network to play.  Added to that is only 1 mode; capture the flag, a mode where you NEED to plan with your team.  Spawn points are next to team flags so more often than not you will be attacking surprised foes or being attacked by surprise enemies that appear behind you.  In single player scoring feels like a lucky break every time you do capture a flag, not a feat of skill.  Matches will end in low scores or draws more often than not, unless 1 AI member on either team decides to play by his own rules, effectively neutering that team’s chances at victory.  The single player is 3 vs 3, which is better, but with the limited amount of gameplay it will still get old.

The game itself does not look pretty.  It’s not awful, but the lack of detail in everything does not make this game enjoyable to the eyes.  The one standout is the skins you unlock for your tanks which look like toony spray paint and add some flavor to the game.  With 4 environments available they almost all look stale and washed out.  The lack of any real details reminds me of an N64 generation of game, in a bad way.  The audio is fine enough with explosions and other sounds fitting well with the game.  I found the music to be a little grating after a while, but that could be just me, and it only plays on the menu screen so that’s a relief. 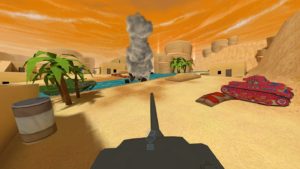 You can use just your headset to control your tank, but don’t, it’s tough.  Especially compared to Bluetooth controller support, which does feel much more natural and allows you more control than just using the headset.  The mechanics here are perfectly fine.  Tanks feel like tanks; they drive slow, turn slow and shoot slow. To counteract that are power-ups scattered and replenished throughout each level which increase fire rate or speed or just add shield and replenish health.  If you are going to succeed in this game you need to pick these up.  The gameplay here is solid, it’s everything else about this game that holds it back.

Handy Games made a good tank battler with some solid foundations, but with only 4 player local multiplayer and no way to communicate, it feels broken.  It’s a shame their aren’t more modes available as well as online multiplayer.  With a need for more multiplayer experiences on the gear this could have been a gem, but as it stands now I don’t’ think it’s worth your time or money, even with the single player mode.