Ever want to be in a WW2 aerial dog fight?  Well, now is your chance.  Dowloaded from the Oculus store for $4.59 is an aerial multiplayer sim game that may just take your breath away.  Though a lack of options may have you looking for new skies soon enough. 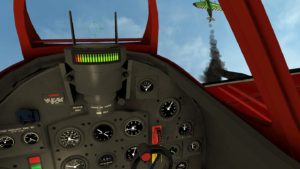 This game looks really good for the Gear, It’s just bad there isn’t more to look at

This game looks really good considering the platform.   Planes look very detailed especially when you notice the lighting effects against them.  Bullets wiz past you instilling a real sense of danger when someone has you in their sights.  And the smoke trails too look great adding a real sense of fidelity  The earth below you is a little less stellar, but it does the job with many peaks and valleys to juke and jive through.  As is typical it looks good from afar but get to close and a muddy mess of pixels is all you will see.  For the Gear VR, it’s actually impressive.  The audio as well is top notch with your plane sounding exactly like you think it should.   Intensity raps up as well when planes and bullets are wizzing past you.

Where this game falters in the lack of any real options.  There is only one level in this game and no single player mode.  There isn’t even a tutorial so when you 1st enter the game prepare to a little confused.  You can use just your headset with this game though controller support is available(and recommended). Headset only has you flying wherever you look with your targeting reticle centered in the middle of the screen.  This mode will make you dizzy to say the least, especially when you are on someone’s tail or they are on yours.  Any sudden movements will have you very disoriented, very fast.  Controller support just feels more natural as you control the tilt of the plane to perform tight turns and maneuvers.  It’s great to look around from the inside of your plane, an option not available using only the headset. 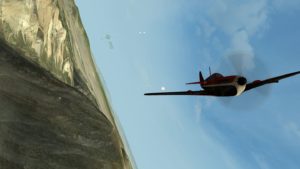 The only option you really have is to host a game or join a game.  Apparently AI bots are available if spots don’t get filled, but in every game I played I was facing people. Any options to customize your plane or level choice would be great and are noticeably absent.  Join a game, kill or be killed, finish the game, done.  It’s almost criminal how little they put in here, especially considering that what they have here is pretty fun.

Those who get nauseous or dizzy in VR best stay far away from this game as it simulates flight quite well, but once battles get hectic you may be apt to lose your lunch.  They can get pretty intense and flying upside and hard turns and loops will have you struggling to regain your bearings.  That said it is a solid shooter and does a great job of making me feel like I’m in an 80 year old fighter plane.  It’s just too bad the game is so bare bones leaving you bored after a match up or two and wishing the developers gave you more of a reason to hang around.