“OhShape is a rhythm VR game where players have to move their full body to go through, punch or dodge walls while following to the beat of the music. It’s a game admittedly inspired by the Japanese TV show Hole in the Wall though takes that concept a little further thanks to the capabilities of VR. 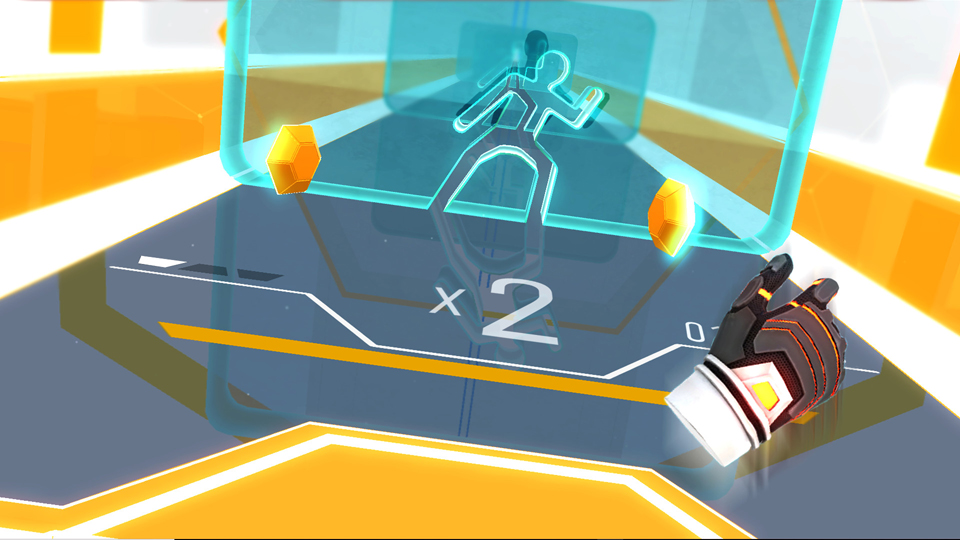 You get what’s going on here!

Controls here are incredibly simple with you holding two tracked controllers in your hands as you match your body to the incoming shapes carved out of the walls they are in.  It’s not all just matching your form to the incoming blocks as you may have to punch through walls, collect gems or dodge blocks that may be to either side or above you, forcing you to squat.  Thankfully you have a shadow to assist in the shape fitting part and that is much appreciated because the game at times can be a little sensitive with just how well you are fitting into said shapes. You can choose from 12 included songs, each with 3 difficulties and a few other options such as ‘no fail’ as well as a speed and accuracy modifier to tailor the game to your skill level.  Additionally, you can visit the OhShape website and download a custom song editing program to create and add any songs you like.  With this tool you can add any song you want and create your own maps effectively giving this game endless amounts of content assuming your willing to spend the time to mess around and create said content.  It’s easy enough to use and once you figure out exactly how it works, you could make a song within an hour or 2, but should you lack patience, their is a small community out there share custom tracks that you can download to your own game.   That is ultimately where the game shines as the limited amount of base tracks, even on the hardest difficulty won’t take incredibly long to master. 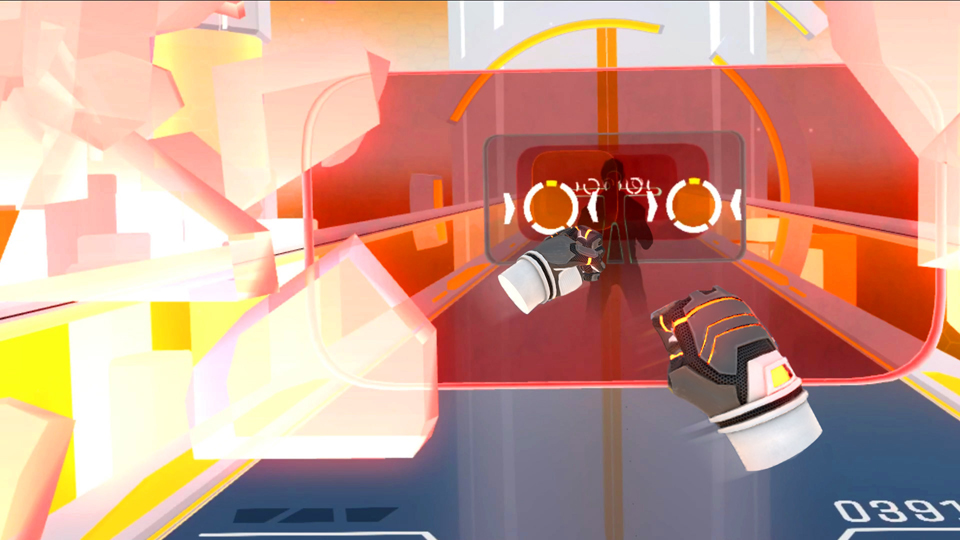 Get yo’ punch on!

Simple is the easiest way to describe the single stage layout, but it still looks pretty damned impressive.   You stand on a grey/blue road as the objects fly toward you with each having distinct colors, blue for the shapes, red for punchable walls and green for the walls you need to avoid.  The background reacts to whichever song is playing having large rectangular prisms  rising and falling to the beat.  It’s not the most mind bending of backgrounds, especially when compared to the Beat Saber or Audica, but it is  very striking in the headset and looks super crisp and that lack of an overly distracting background does allow you to focus more on the queues as they come toward you, especially on the hard difficulty.

The 12 included songs are of the electronic/pop variety and while that’s not my typical go-to genre, it’s fits great with high paced activity.  That said, not every song is a winner, at least from my personal tastes, leaving it up to you and the community to add custom tracks to give this game legs. 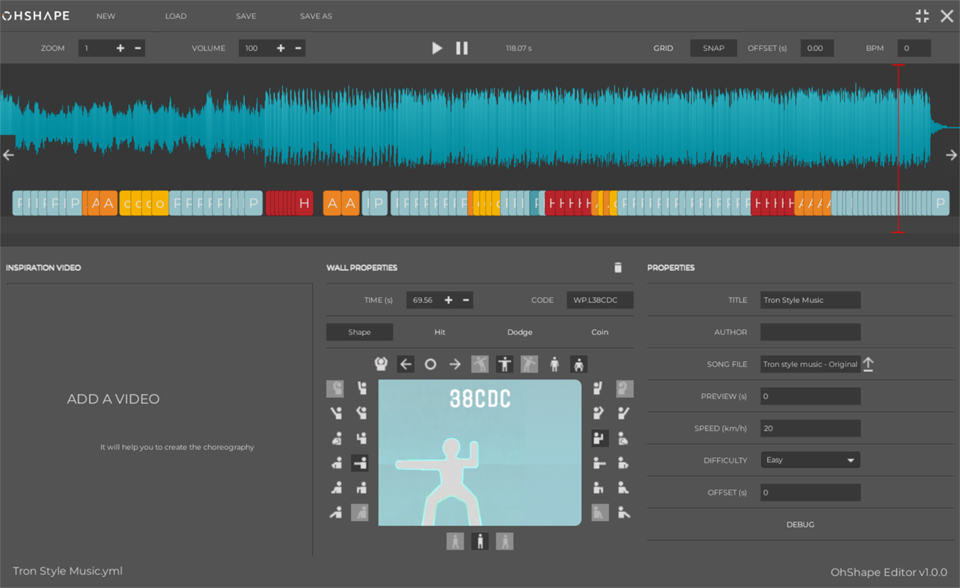 The song custom song creator is fairly easy to use.

OhShape falls somewhere in the middle of casual fun and VR workout with the easiest difficulty providing little in the way challenge and the hardest working up a nice little sweat.  My largest issue, or at least an issue worth noting is that the play area for this game to play properly is quite large as you shimmy and reach very far to the right and left. There is an option for smaller rooms but if your VR space is cramped, you might still be smacking walls and tables if you’re not careful.  The other issue is the limited number of tracks that come with the game and while it’s very easy to add custom songs, creating your own tracks will involve a decent investment of your time.  As it stands now, the community for this game is there, creating custom music but it’s up in the air if that community will sustain itself or lose interest and what’s being uploaded is up to those creators, not you.  I don’t want to make that too negative as, like I said, new community created tracks are slowly being uploaded and as it stands now their is a couple more hours worth of music to get through but if you want to make this game your own, you might have to invest some time in the creation tool.  One other issue to bring up would be the collision detection on some of the shapes you slide through as I found it to be a tad too sensitive at times though there is a slider in  the games menu that adjusts the sensitivity but I think affects your final score when/if you complete a track. 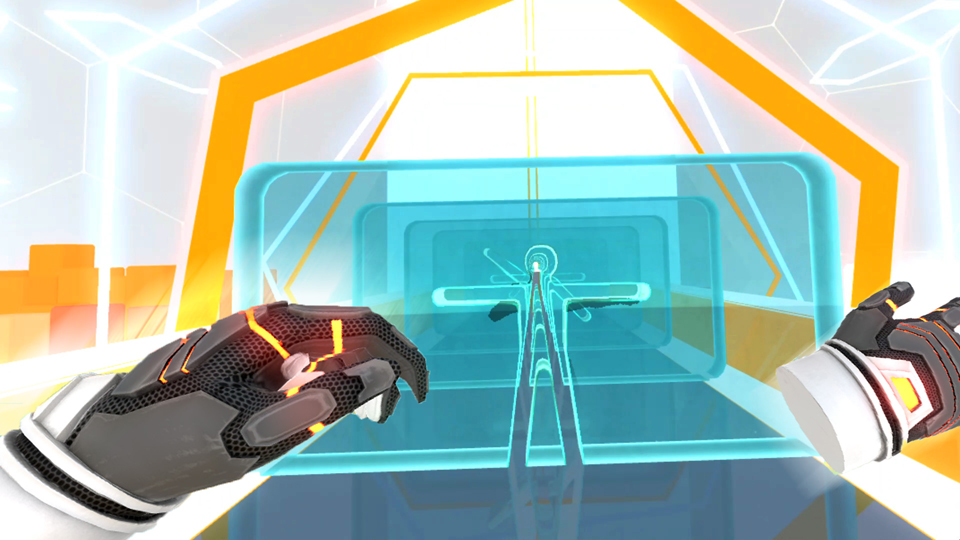 Get ready to move quick!

OhShape is great fun whether you are looking to be competitive thanks to online leaderboards, play by yourself and get a little workout in or with friends; swapping the headset to see who can get the highest score.  The base game is lacking in tracks currently, but if you’re willing to put a little effort into searching out and downloading community songs then your library will be greatly expanded in short order and the desktop creation tool allows you to put any song you want in the game.  It’s easy to pick up and play and whether it’s your first time in the headset or you’ve been playing for years, it’s a great way to get a little physical in VR and have some fun while you’re at it.

What would I pay?  $20 is on point whether you want it just for fun or as an additional workout tool.   If the community made tracks weren’t available, I’d say wait for a sale as the base game is light on content but as it stands today, with a tiny bit of effort, there is more then enough songs available to justify the full price.

Odders Lab provided The VR Grid with a press code for this title and, regardless of this review, we thank them for that!