Who doesn’t like cutting up your foes in VR?  Slicing off limbs while blocking and parrying attacks from enemies all around you!  Well you get to do just that in Ninja Legends, which places you in the role of a Ninja, out to retrieve the stolen shadow scrolls from a band a ninja thieves who will stop at nothing to make sure you don’t get those scrolls back! 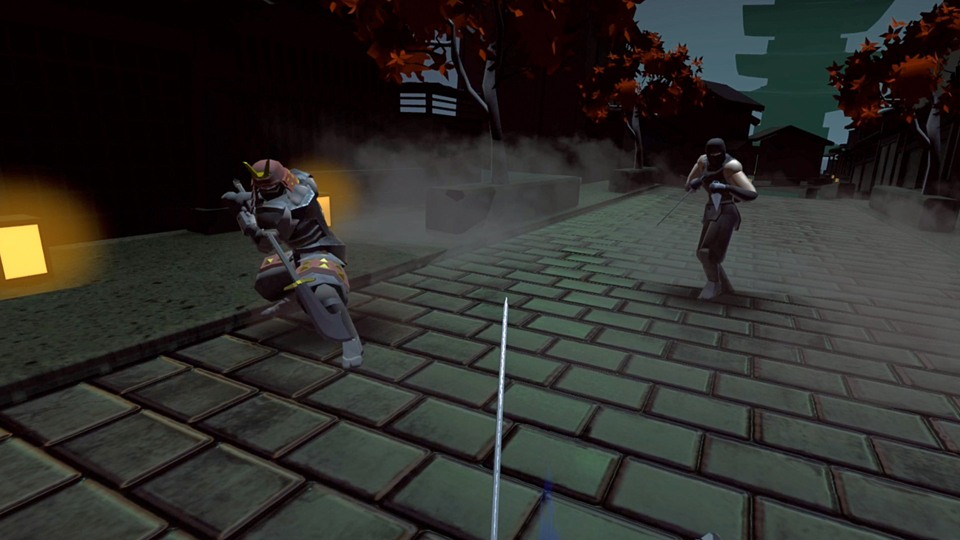 He’s about to charge!

This is a stationary affair with ninja’s coming at you and as you are wielding an assortment of weapons, motion controllers are a must.  Initially you are armed with only a sword though soon enough you will have an array of weapons to choose from like a bladed stave, bow or hand claws with a few more options the further you progress through the campaign.  Besides wielding your weapons, you’ll also have to block attacks which is nothing more then ensuring your hands are in the right place at the right time but does add a nice level of depth to all your arm waving.   Each weapon and ability unlocked gives you the option of trying them out in brief tutorials that let you play around before you decide if you want to use them or not. The abilities you get start off simple with you being able to summon a magic bow and fire between 1 to 3 arrows depending upon how much you have filled your special meter up.  Later abilities let you summon magical blasts or give you the ability to briefly teleport to an enemy to hack him up 1st.  Each successful hit or kill adds to that meter ensuring you have access to your special attacks often which is great as once you hit stage 6, the games difficulty ramps up and enemies come at you from all sides.  Every stage will have ninjas running at you with each model attacking in their own unique way so while some may rush you with swords ready, others may hold back for a jumping or rolling attack or just hang out in the distance tossing shuriken’s your way and the only way to defeat them is to knock those thrown blades back with a swipe of your weapon.  You’ll fight a boss every 4 stages and they typically utilize incredible magical abilities.  Each of the 18 stages will take roughly 10 to 15 minutes to get through, assuming you don’t die, and once you compete a stage you are treated to an online leaderboard highlighting just how good, or bad, you did with each stage also having a 3-star system in place to further test your skills should you care about such things. 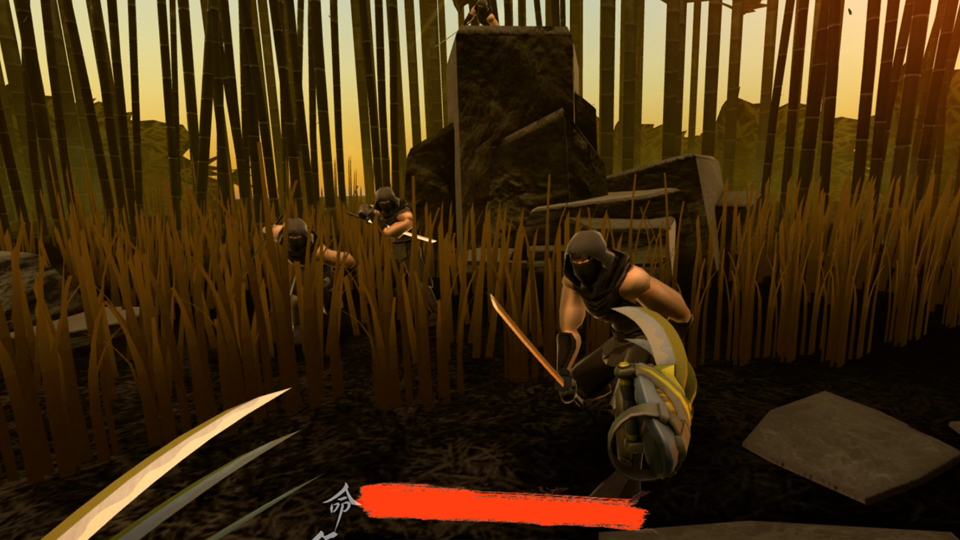 The hand caws are fun to slice and dice with!

Beyond the campaign is an endless mode which will test your survival skills against never ending hordes of enemies.  Challenge mode gives you restrictions like limiting you to a specific weapon or only facing a certain type of foe with those modifiers changing every few days.  Archery defence mode tasks you with defending a base from incoming enemies who come at you from all sides though you can teleport to a few select points around the map for a better vantage point.   Archery Target has you shooting at targets that appear all around you with the goal being to not only hit them but get as close to the center of each target for max points.

As it’s all about killing ninjas, you better believe you can slice and dice your opponents though those expecting Gorn or Blade and Sorcery levels of ragdoll physics might be disappointed.  Ninja Legends fall somewhere between those titles and Fruit Ninja as pseudo-realistic ninjas come at you from high and low but can be eviscerated with a well-placed strike.  While you can hit those ninjas more then a few times the 1 killer blow can slice them apart so whether your cutting off arms or legs or splitting your enemies in half, it’s satisfying whenever you see that happen.  Each of the environments you visit are static, placing you in a variety of feudal japan settings from inside Dojos, city streets, forests, wintery bridges and a bunch more.  The enemies themselves also look alright but are lacking the finer details when they get close, but do the job nonetheless.  When you see a dude coming at you armed with 2 swords, you know to expect some high-flying attacks or fully armored samurais that will charge at you with their spears.  It’s simplistic overall, but polished enough to not really find any real flaws beyond just how repetitive your foes can be. 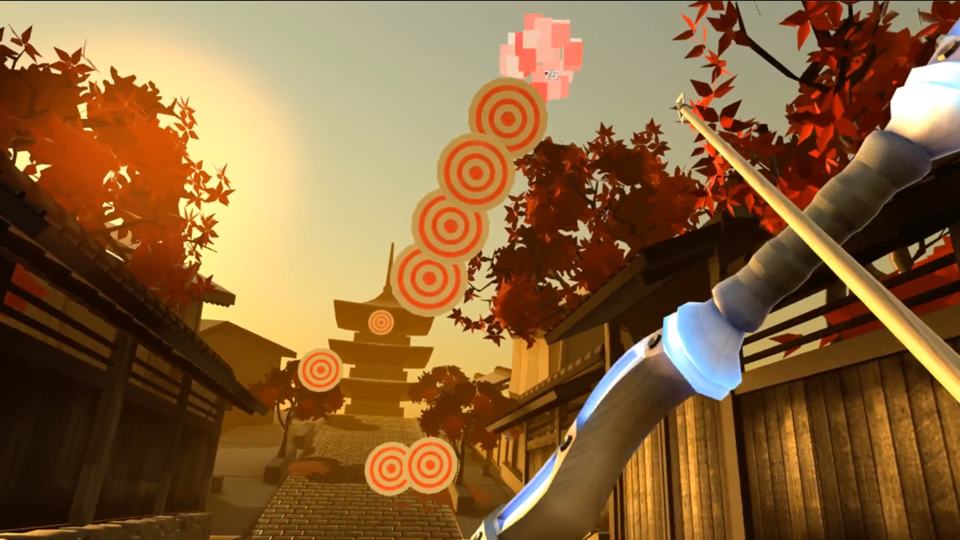 Narrating your journey is a slow talking warrior who really only pops up during the tutorial sections of the game with almost all of the story being told through a sentence or 2 displayed below each level on the stage select screen.  Sound effects are on point with each enemy making odd grunting noises when they show up as well as the impacts of yours and their weapons making the appropriate slashing and clanging metal noises.  The soundtrack is comprised of a few songs that take inspiration from the traditional music from that side of the world and if nothing else fits perfectly with the action and further asserting the era in which this story takes place.

Ninja Legends is a fun little wave-slasher but does come off as little on the simple side.  For all the high and low strikes, special abilities and multiple weapon and game mode options, this does tend to devolve into a waggle fest, unless you use the bow and arrow, especially when the enemies begin to surround you.  I had an extremely hard time facing foes all around me, and even with all the games combat options, I ended up frantically trying to dispatch the enemies in front of me with 1 arm while waving my other arm like an idiot behind me in the hopes I was doing some kind of damage to any foes there.  Swiping harder might make a foe unable to defend himself allowing for an easier time to kill but keeping that intense pace can also be challenging turning this into a very physical game.  I appreciate that aspect of VR as it’s awesome to fight off a bunch of ninjas successfully while being slightly out of breath which adds greatly to the physicality but getting there for myself typically involved less strategy and more crazy arm waggling.  Due to that gameplay choice, every stage starts to feel samey and I found myself only playing a stage or 2 before getting bored. Should you fall in battle, you must restart from the beginning and as the latter half of the games is extremely challenging, I found myself dying a little too much on medium settings and ended up playing the latter half on easy just to get through the game.  The additional modes are appreciated though in truth offer very little from what you experience in the campaign but if you do dig this kind of combat, then there is plenty here to keep you coming back. 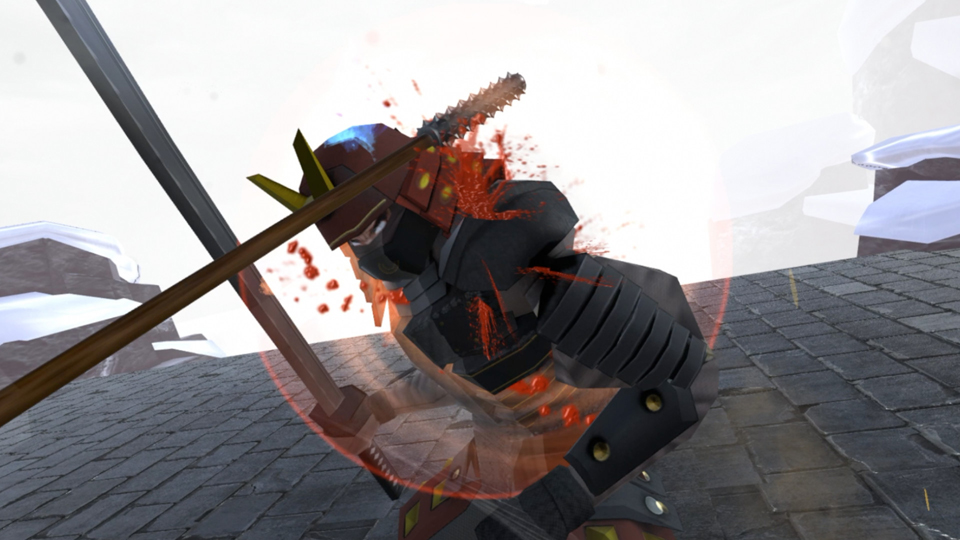 The boss battles get very challenging.

For those that enjoyed games like Fruit Ninja VR or even Kingdom of Blades, this feels like the more mature version of either of those offerings.  Slicing your opponents in half is always a joy and the variety between the weapons, while not crazy, was enough to make me want to experiment with each one.  If you are in the mood to take on hordes of ninjas and maybe work up a little bit of a sweat in the process, Ninja Legends is a competent little action game.

What would I pay? There is hours of content here, but it does get a little redundant and while $20 isn’t a crazy ask for this, the repetitive nature of the each stage has me thinking this should be a few dollars cheaper.  It is initially very fun, but the action does get old sooner then later.

Coinflip provided The VR Grid with a press code for this title and, regardless of this review, we thank them for that.