Looking to shoot hoops in VR? While keep looking.  This basketball “simulator” fails on almost all levels when it comes to a realistic NBA experience.  What you are left with instead is a collection of minigames that play mostly the same. 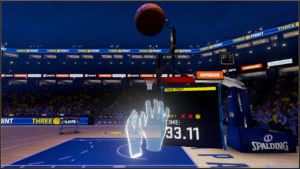 See those hands, they are not mapped to the Move controllers….I know, right?!

So the term “Experience” has my mind now associating that word with “Over-priced” as far as VR is concerned anyways.  A big standout is lack of Move controller support which seems like a huge missed opportunity given the assumed controls you would think would be in a basketball game.  Suffice to say that leaves you with a heavy emphasis on looking and pressing the ‘X’ button. This is pretty accommodating with a definite “assist” mode enabled as most of your shots will go in or next too the net.  With a variety of modes including Three-Point, Time Attack and Buzzer Beater.  All of these play out the same with you trying to score as many baskets as possible from different points on the court with different time restraints.  The one notable standout is Skill Challenge which has you bouncing your ball off a series of placed targets around the court.  This requires you to look at the next target to activate and time button presses to increase score.

I enjoyed Skill Challenge the most and with a difficulty modifier for each mode they can get challenging.  The problem is the rest of the modes play themselves out fast.  Look, press ‘X’, repeat and with the game seemingly improving your accuracy there just isn’t a tonne here.  Excluding Skill Challenge, the rest of the modes get boring fast and I found I didn’t really care if I missed shots.  Skill Challenge did engross me the longest and high difficulty is really tough, but once again, you will just get sick of doing the same thing over and over.

There isn’t a lot to look at here which seems also like huge misstep.  While the gameplay is pretty shallow, solid audio and visuals may have helped mask that fact.  What’s here does not.  The court looks good and the shooting animations look fine but the crowd is just the same 2 models reskinned with different colors and a few animations.  Nothing here stands out and everything just looks boring.  Bright colors and lighting simulate the inside of arena, but you just don’t care.  Audio is a collection of generic upbeat tracks with commentary that, within the first game you choose, repeats itself often.   Here to help you along is Paul George, and typical of sports athletes and games, his delivery is so deadpan it’s actually kind of amusing. 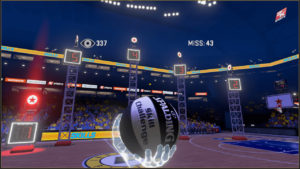 Challenge mode is where you will have the most fun!

I mentioned the multiplayer component which really just consists of taking turns with people in your living room and competing for the top score.  Nothing to exciting but it’s still appreciated I guess.

While there is some value here and some fun to be had, the lack of Move support is almost a crime and most of the modes are slight variations of the same basic mechanic.  Even if you were a hardcore NBA fan, the price alone should have you staying away.

What would I pay? $4US/£3.25 tops.  This is a collection of 4 mini games all based around the same mechanic, throwing balls.  There is a little fun here, but it wont last that long and I doubt you’ll be coming back for more.