I think it a pretty safe bet that most of us VR users are clamouring for a multiplayer shooter, and while there are a few available, most feel shallow or lack refinement.  Smashbox Arena offers the future of competitive sports in the form of a team shooter utilizing dodgeball rules with a toony twist. 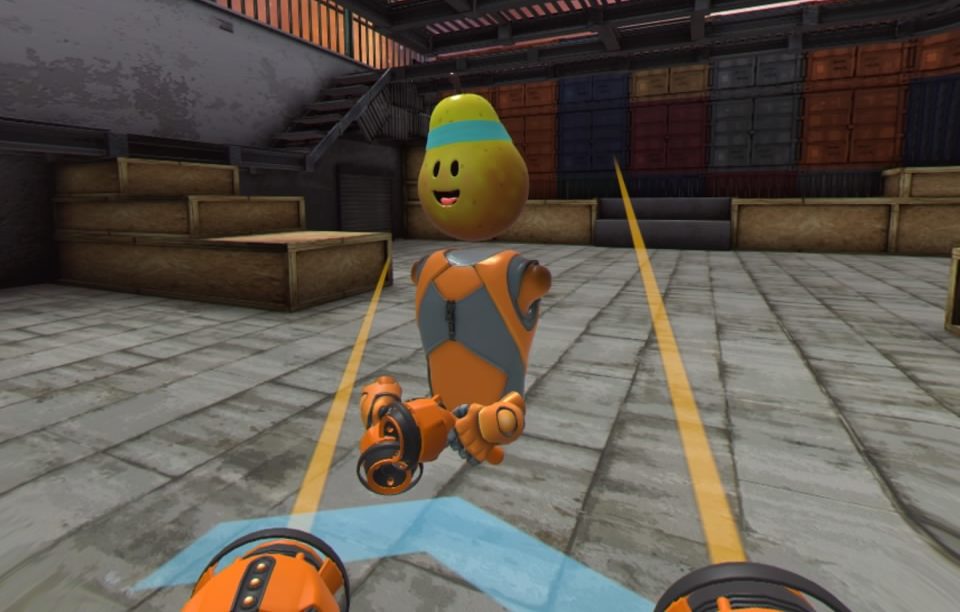 This is your tutorial guide. I call him Pear Head and I was annoyed I couldn’t shoot him.

Move controllers are your only friends here (besides your teammates) and the introductory tutorial breaks down the weapons and mechanics used throughout the game.  Movement is handled by delayed teleportation where you toss a beacon, wait a second after it lands, and move to that spot.  It’s definitely not the most ideal way to move in a shooter, but lends itself relatively well to the all the other mechanics at play.  Your “guns” act more like plungers; sucking in balls and other weapons to shoot in singular blasts.  If you want to move around the map, you need to keep one gun “empty” to do so.

What this all means is the game is a giant juggling act.  Movement is slightly delayed so timing is very important.  Making sure you have some ammo(balls) lying around you to suck up and shoot is a must or you could find yourself in serious trouble, being forced to catch incoming balls before they hit you.  Holding a ball in your gun also allows you to deflect an incoming ball and room tracking allows you to physically dodge incoming projectiles.  Power-ups pop up randomly throughout each match so heat seeking rockets, giant boulders, a sniper rifle and a few more options mix up the action.

Graphically the devs have chosen the VR safe route by making this all very toony.  Characters in the game are all floating torsos with floating guns at their sides and customizable heads to add a little variation in your allies and enemies.  Levels as well are small arenas ranging from construction sites, to canyons, forts and a variety of other stages.  It’s all very clean and polished and fits well with the overall gameplay.  When you get eliminated, you get a bird’s eye view of the map, which you can grab and rotate to get a better view of the action…I loved this feature!

The sound design didn’t really stand out to me, but it didn’t offend either, except during the single player campaign where the characters briefly spoke in oddly exaggerated tones while spouting off short one-liners.  Still everything sounds as it should and matches the action perfectly,  so asking for more than that is just me whining. 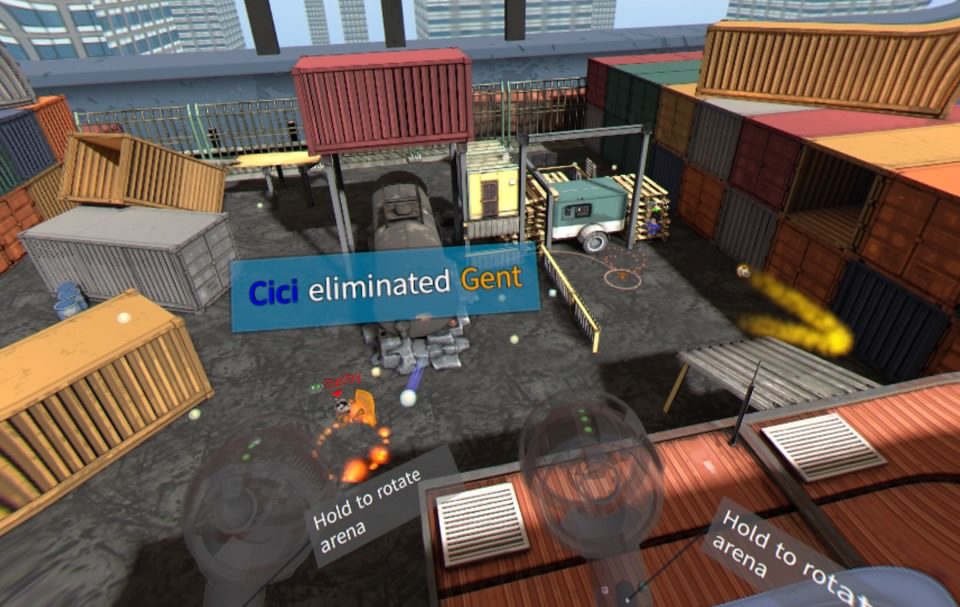 The view from above after you have been eliminated is great way to watch the rest of the action unfold!

Besides the tutorial, there is both a single player campaign and the multiplayer modes.  Single player is nothing more than matches broken up my very short cut scenes as you and your team advance through the AI ranks.  This mode became tedious after a few rounds as I found the AI to be either ridiculously easy or unfairly difficult.  Practice, trial and error and a bit of luck will push you through the three separate difficulty modes, but it doesn’t compare to the multiplayer.  It’s awesome that it’s in here, but it’s not the reason to play this game.

Multiplayer is where the fun lies as teams of 3 face off against each other in the race to get 5 victories.  The action is hectic and the shortcomings all but disappear when you know everyone must follow the same rules and use the same control scheme.  It’s a lot of fun and I enjoyed it way more than I thought I would.  It’s the kind of game where memorizing levels will give you an advantage as items and vantage points may just give you the edge needed for victory.  The store page states that mic support is available, but at the time of this review it seems to be missing as my cohorts and I were forced to shake our heads and wave our arms to communicate.

It’s not all praise as a few issues did annoy me and some aren’t even the games fault.  Besides the single player campaign being a repetitive slog, and the missing mic support I also had 1 specific tracking issue.  Due to the PSVR’s limitations, turning away from the camera results in a loss in tracking, which continually frustrated me.  This is countered by the pie-chart turning available, but given the frenetic pace balls and projectiles can come at you, it’s just way more natural to spin around on the spot than trying to turn by pressing a button multiple times.  That is something I need to adjust too and like I said, it’s not the games fault, but still hampers the natural way I would like to play, and that annoyed me. 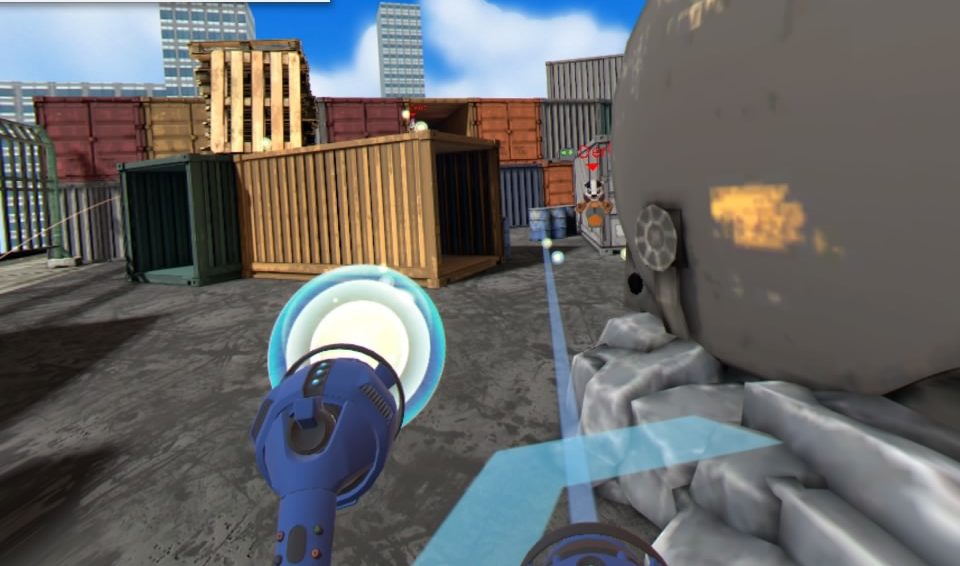 This is still a commendable effort and just about maximizes the First Person multiplayer experience you can have with Move controllers.  I’m sure many will cry about the lack of locomotion and they have a point, but once again the hardware limitations don’t really allow for that, and Move support, in a competitive shooter.  This is great for those looking for a multiplayer shooter.  It’s polished, balanced, fun and any game that has those 3 descriptors is a game worth playing!

What would I pay?  $20 to $25 seems a bit more reasonable as the content here seems a bit light for the asking price.  That said I haven’t really been into online shooters for years and if you are looking for one, you’ll have more fun with this than you might think.

Archiact supplied theVRgrid.com with a review copy of this game and, regardless of this review, we thank them for that!