I love attempts to simulate a real life experience in VR.  They aren’t always the best translation of physical activities but there is still something so enticing about wing-suiting down the side of a mountain or luging down busy streets or whatever that just makes these attempts intriguing.  Now we get to kayak on some rough waters utilizing real world kayaking skills and methods as well as few more extreme options, all in an attempt to get better and climb the leaderboards. 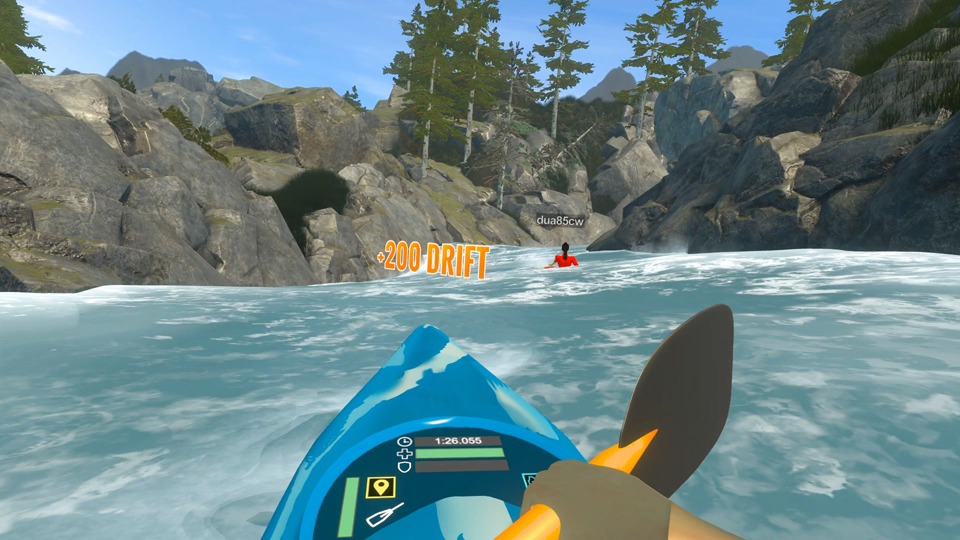 The controls should be fairly obvious with each hand holding a paddle, as if each were on the end of 2-sided kayak paddle.  As you are technically holding 1 paddle under the guise of 2, only one end can be in the water at any given time to have any effect, whether it’s turning, drifting or just paddling forward.  A tutorial breaks down exactly how these mechanics work with 3 control options available with the easiest giving you greater control while sacrificing speed with the advanced option being the exact opposite giving you minimal control as you cruise down the rapids.  Additionally there are blue pyramid shapes scattered along each course which give you a little experience, buffs and temporary bonus items like a grappling hook that let’s you take a corner going at max speeds or a wind chute that let’s you breeze down the river at  a very fast pace.  Should you get to close to the rocks, you can push off of them by joining your hands together which is a skill that needs to be mastered as your kayak can only take so many bumps though pickups may give you back that health or even give you some armor.   The goal is to get to the end in the fastest time, accruing experience for just how fast you go, how much damage you take and any dangerous maneuvers you perform.  As you level up you unlock more courses to play in and each course may feature a ghost of yours, or other players, best runs giving the illusions that this is a live race and adds a great feeling of competition. 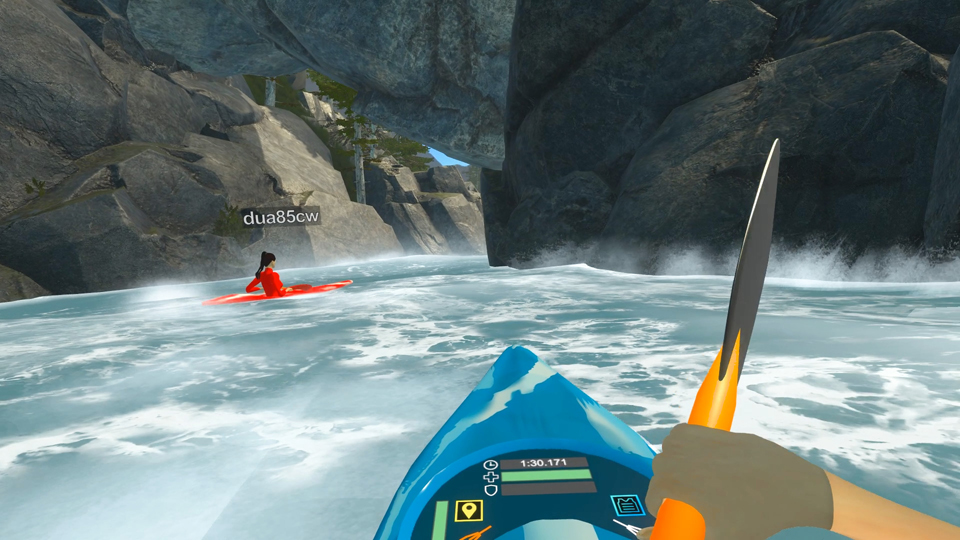 Navigating the harder stages is going to take some practice.

The game has a variety of visual settings that change the quality displayed and while I did dabble with the max settings, I was forced to dumb them down to get consistent frame rates during my gameplay.  Whether you play on max or min settings, Downstream VR is not going to blow you away, but still does the job and I had more then a few moments, especially on the winter stages, where I just stopped paddling and took in the sights. Water looks like a series of overlays which don’t look great, but like I said, does the job.  More subtle effects are used like the mist of an upcoming waterfall and help simulate how this would be in the real world.  There are 12 stages in total spread over 3 different biomes; a forested area, snowy mountain range and desert canyon and I appreciated the visual differences between each stage.  Speeds can get very fast as each stage unlocked gives you an increasingly difficult course, typically adding larger drops and sharper turns which make for a thrilling little river boat adventure!

Audio suffers a little in that its just so typical for a budget game of this type.  The music is the perfect blend of electronic beats that to myself, doesn’t really fit with the game.  There are only a handful of tracks and after a few plays, I just shut that down in favor of the sounds of the raging river I was on…and me smashing into the environment. 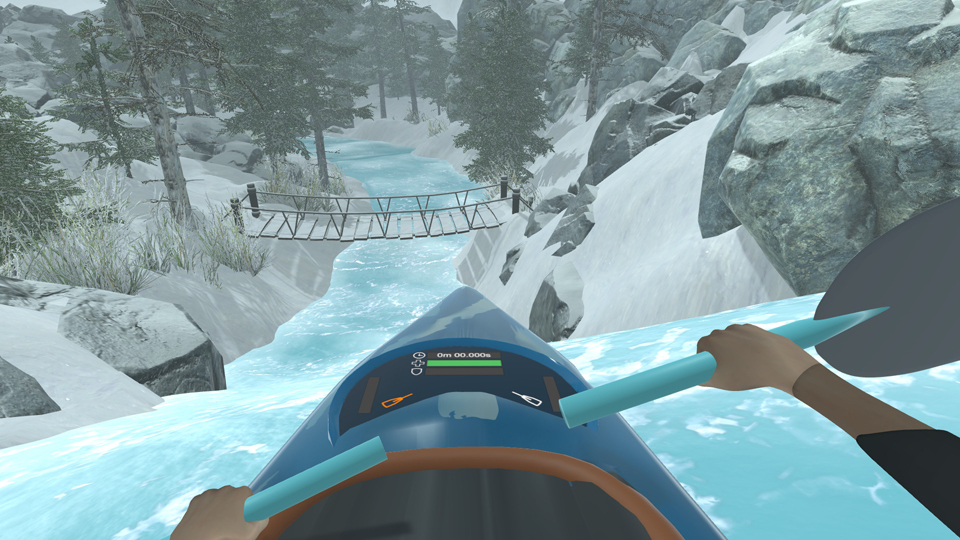 I really enjoy the winter settings.

Downstream VR is not easy, at least not if you want to be competitive.  Playing on the easiest mode gives you a ton of control but removes all the speed that makes kayaking fun in the first place.  Medium ramps up the pace but even still I found the game to be a bit slow and only on hard did I truly feel the thrill of being on raging waters.  I still had a lot of fun playing on normal which I think is where many people will play this game, at least at the early goings and I honestly wouldn’t even recommend playing on easy unless you are struggling at mastering the controls.  There is a freestyle mode available that removes the damage factor, making your kayak indestructible and allows you to practice and go through the stages without the worry of failure.  It also seems like the leaderboards are broken up my course only, meaning those that are playing on the hardest control option will crush those playing on easier settings and I think breaking up the score board by difficulty used might make for a more even playing field for those that play this a little more casually.  When you first start the game, all the courses but 1 are locked meaning you’ll have to play through the same river ride a few  times before you gain access to the others, though playing through the free mode accrues you experience much faster.  Failing a course in race mode gets you no experience so for those that don’t care about leaderboards, just stick with free mode for the first while. 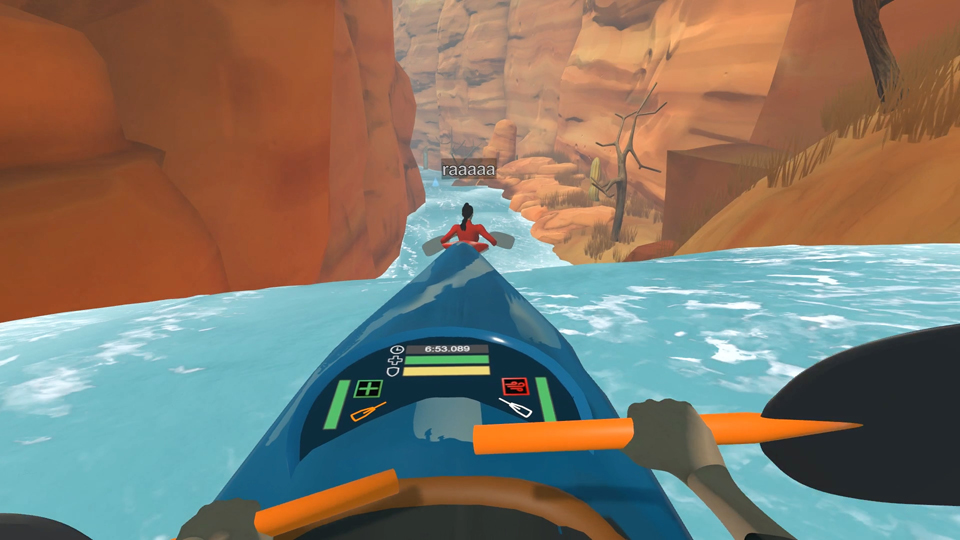 Racing against ghosts is great fun!

I had a lot of fun with this once I unlocked a few more courses and just got better at the game.  The control scheme does a solid job at emulating real-world kayaking, especially considering you have 2 smaller paddles simulating 1.  The ghost racers you face were a huge motivating factor for myself, especially when I recognized a friends name or saw my previous best run, a racer named YOU, and I really enjoyed the competitive nature of the game.  This reminds me of games like Rush VR or The Climb in giving us a true to life sim with an arcadey feel that’s just to fun jump in and even more fun when you develop some skills and get better.

What would I pay? This is $25 which does seem a tad high given the overall quality of the presentation and lack of content.  The 12 stages kept me entertained but with a bulk of the gameplay relying on replaying the same courses over and over, I feel this should be below the $20 mark.

JumpStick provided The VR Grid with a press code for this title and, regardless of this review, we thank them for that!