One of VR’s most lauded titles in Moss (review here) has finally received its teased sequel after 4 very long years and starts off exactly where we left Quill, after the defeat of Sarfog.  If you aren’t familiar with Quill’s previous adventure, I suggest you go play that 1st one (available on PC, Quest or PSVR) as this takes place where Book 1 left off, once again placing you in the role of The Reader as you aid and control Quill, a brave mouse, in her quest to rid the world of its evils. 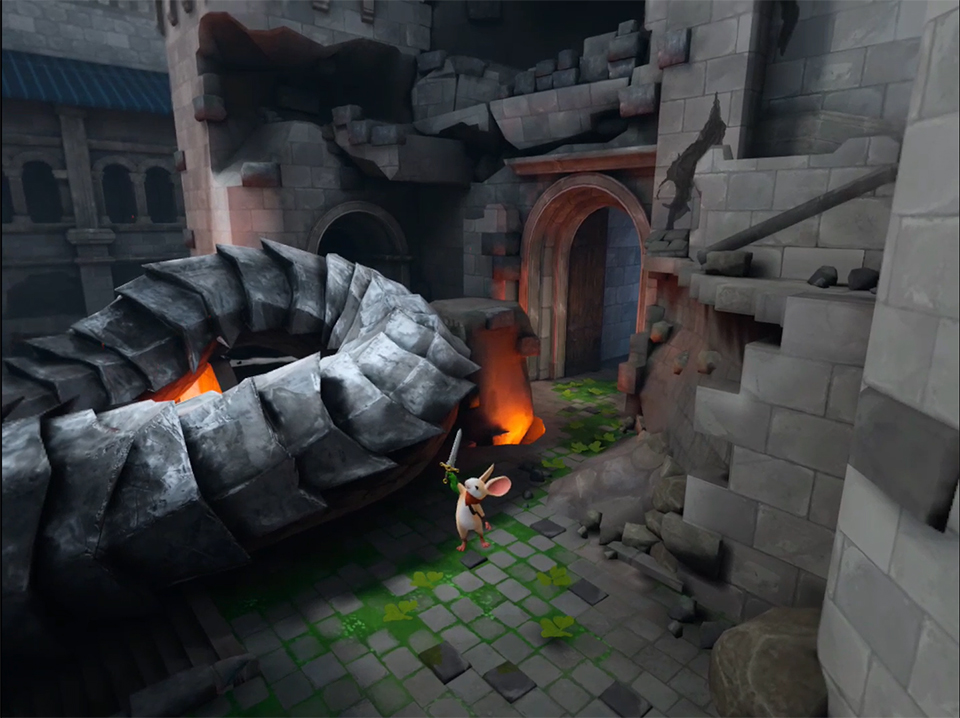 Quill is back and right where we last saw her.

Those who have played the 1st game on the Quest will be instantly familiar with the controls here as you once again navigate Quill around each area; jumping & climbing while you, as a giant spiritual entity, can interact with enemies and specific objects designated by runes or their color…exactly like how the 1st game played.  Where things change up is the abilities and weapons you and your little mouse companion get to use.  It won’t take too long before you find a suit of armor to change up Quill’s appearance and unlock the 1st power which lets you restore plants back to life, allowing Quill to access areas previously inaccessible.  You can interact with the world a little more beyond just touching enemies as you will gain powers that let you create bridges and even hurt enemies, giving you a more substantial presence.   Eventually you’ll unlock the ability to make Quill dash, use a boomerang type weapon, a hammer and a few other surprises I wont spoil here that do make Book 2 feel like more than just the next episode in this series, but a fully realized sequel.  Due to those new gameplay elements, puzzles get more complicated as you may have to chain together Quill’s powers or even work in tandem using both your abilities to deal with specific enemy types and obstacles.  Back are the stained glass shards & dust you need to collect for those trophy hunters out there and thanks to those new abilities are puzzle designs that, on more than a few occasions, held me up for a bit.  With all those differing elements at play, it’s important to note that everything in Book 2 feels organic with every mechanic and aspect, new & old, working near flawlessly.  There are 6 chapters to get through with the game auto-saving your progress as you enter each room and upon beating the campaign, you can revisit the previous stages to hunt down any missing collectables.  Book 2 is also larger in scale than the 1st with the campaign clocking somewhere in the 6-hours mark, though I was admittedly exploring every nook and cranny in this beautiful world. 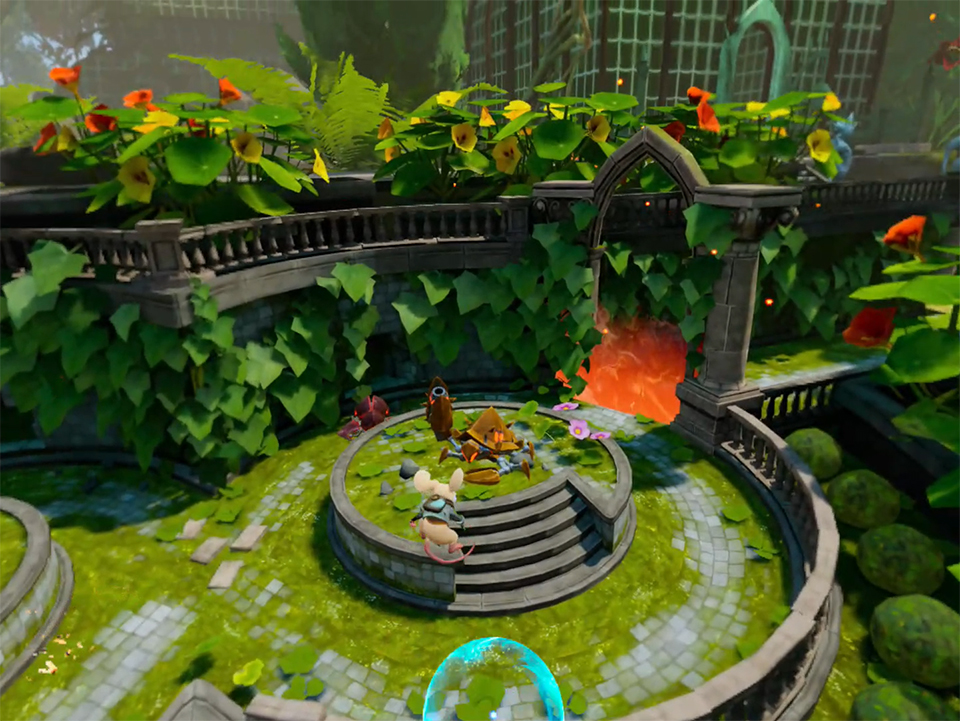 One of the best aspects of the Moss franchise is that everything looks amazing and makes all the gameplay elements even better.  Quill is a fully realized character and we get to see even more of her little idiosyncrasies that make her so endearing.  Taking place in a VERY post apocalyptic world (so much so that it’s been overgrown) hints of humanities past pop up as Quill travels through various realms. As the world is now ruled by animals, the settings you visit, if not natural, are a blend of the past creations of man and smaller animal sized kingdoms.  It’s a wonderful juxtaposition and considering the diorama style nature of the game, looks fantastic, making this world seem substantially larger than it initially appears.  Each area you visit is its own room (think old school Zelda) but many are setup so you can see the adjacent settings you’ll be coming and going to, as well as massive distant objects like castles, mountains or a greenhouse that looked visually stunning on PSVR though for the Quest 2 version, many of those distant objects have been changed from 3D renderings to highly detailed still images.  The same goes for smaller objects like foliage, other debris and effects which are all still present, but on some stages come in smaller amounts or are removed entirely due to the constraints of the mobile platform.  In trade from the console version is a substantial boost in resolution, and also brightness, that makes everything much clearer so while we may be seeing a little less of this world, that clarity compared to the PSVR headset is a decent trade-off for what is still an amazing looking game on the Quest 2. 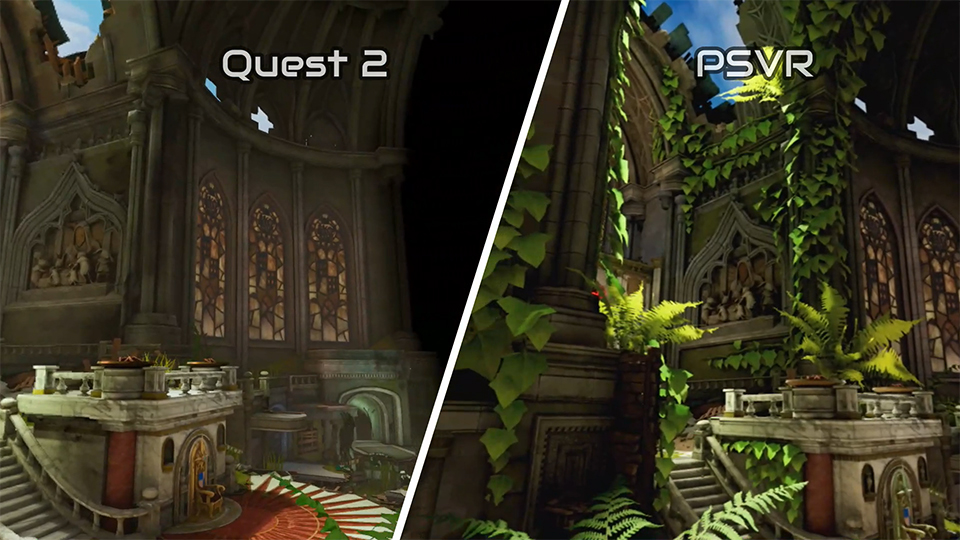 The Quest version does lose assets in place of greater resolution.

Surprise, surprise, the audio design here is also flawless with the cinematic and ambient music kicking in exactly when it needs too or falling into the background, accentuating every scene you and Quill find yourselves in.  Morla Gorrondona is back as the narrator and sole voice actor and I loved her work in the first game and in here, she goes above and beyond playing even more characters in bedtime story type fashion.  I can’t stress enough how much I appreciate the use of a single actor to play so many roles, and the fact she delivers them all with satisfying and believable emotion is a testament to her skills.  3D audio is also present and amazing though once again, it’s use can be subtle as the action takes place largely in front of the player, but when I noticed it, it added yet another layer of depth to this fantasy tale. 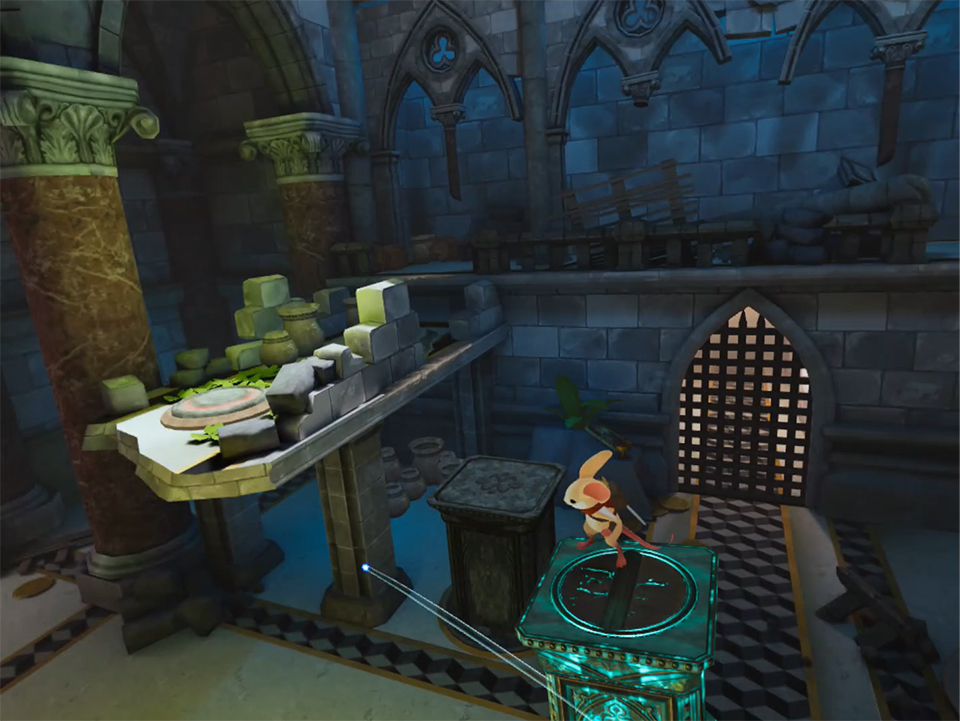 You can still help Quill in familiar ways.

I love Moss Book 2 as it really improves upon the previous game in every way while still staying true the gameplay and story that made the 1st one an instant classic.  Thanks to the touch controllers, the players interactions with the world are substantially easier than trying to constantly keep my DS4 in line with the PS4 camera, making the Quest 2 version play much smoother than the PSVR one.  This is doubly so as you now have 2 hands instead of one, meaning you can now multi-task, using quills abilities while stunning foes at the same time, a task that was much harder to pull off on the PSVR.  The 1st hour in Book 2 will have many thinking it is little more than paint-by-numbers sequel but once the new weapons and abilities start to show up, I realized just how much more game there is here.  My 1st run took just over 6 hours and I still missed some collectibles meaning I’ll have to dive back in to find them all extending game time a little more.  Also, some of the solutions I stumbled across for the puzzles in the latter half of the game seemed to be more fluke than the actual solution and while that may be by design, it still felt like I had cheated the game in some way but there were never any repercussions after those instances and the game played as normal so maybe it’s just me.  Lastly would be the simplistic combat, which has carried over from the 1st game and while new enemy types and abilities do mix up these encounters a little, the combat is still pretty samey, though the pacing balances puzzles and encounters quite nicely so I was never really fatigued by killing more of the mini-robot horde.  Those small problems aside, Book 2 is bigger and better than the 1st game by a significant margin, fulfilling it’s promise as a true sequel and one of the best VR games ever made. 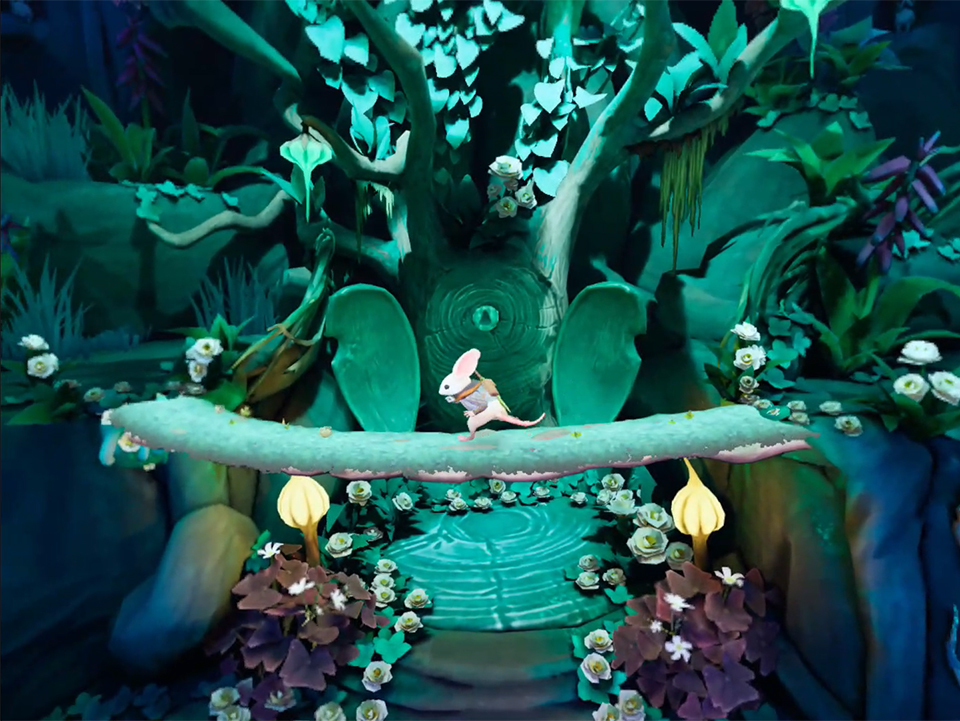 Your new powers will be needed to help Quill through the world.

If you loved Book 1, you’ll love Book2, it’s just that simple.  With this sequel, the Moss franchise has established itself as one the best you can play in VR and a title non-VR fan should be jealous they can’t play.  It’s a beautiful game unlike any other with charming characters, an engrossing narrative and some the most endearing story telling you can get in modern gaming.  If you love VR than you owe it to yourself to play Book 2…just make sure you play Book 1 first.

What would I pay?  So, this is $40 US and I guarantee some people will cry foul, but I won’t.  With a 6+ hour campaign built around an amazing world with clever puzzles and a multitude of combat options and mechanics, it’s totally worth that price!  Book 2 delivers everything I wanted and more out of a sequel and I enjoyed every minute I spent in my return to the world of Moss.

Polyarc provide The VR Grid with a press copy of this game and, regardless of this review, we thank them for that!