This is one of the more interesting titles to come out for VR and for a multitude of reasons.  A fantasy platformers hearkening back to gameplay styles of old.  Often compared to N64 games like Mario and Zelda you would think with comparisons like that this would an retro experience that would be impossible not to love.  While love may be a strong word for Mervils, as it has a fair share of shortcomings that may scare away many people, it also has an undeniable charm. 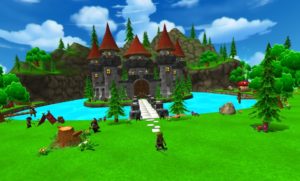 This may not look the greatest, but the charm is undeniable

You play as a Hero chosen by fate to rescue the Mervil lands from Balazar, a wizard bent on ruling the realm.  Firstly, you are greeted with a character customization screen that allows you to create your hero to your liking.  The options here are fairly limited, but there is enough to make your character feel unique.  Weapon options are available as well, but limited at the onset, though you can purchase more weapons and armour as the game progresses.  Saving the world involves you collecting the pages from an ancient magical book and using that power against the evil wizard.

I need to tackle the visuals here first.  The game looks dated, intentionally so as the development team behind this is pretty small and they have stated gameplay was their focus.  The sprites are simple, the 3D modelling is basic, the animations are stiff and the textures are wanting to the say the least.  It’s not the prettiest game.  Though with that being said they polished the heck out of what’s here.  Everything is crisp, vibrant and does fell alive.  The cutesy cartoony art style also lends itself well to the limited visuals and after an hour or so I really just began to focus on the other elements of the game.

Gameplay is simple.  You can swing your weapon, jump and walk around wherever you want.  Mini game-esque additions like walking a tight rope by leaning in the direction you want to go and riding a mine cart (or other vehicles) through and around a level mix up the game nicely.  I did have issues with the ballista and catapult sections with the ballista’s aim just seeming off no matter how I adjusted it.  Each of the 5 worlds before you are broken up into smaller levels giving you hours of gameplay and as you progress you start to see just how much work went into this title.   The object is to collect the pages of each book in each level (typically 15 or so) with some pages just lying around while other requiring you to perform certain tasks.  Escort missions, using items specific to puzzles and finding the clues to open a lock that are scattered around the level are just a few of the objectives you’ll have to accomplish.

Mervils’ strength lies within its depth, but you will have to invest a bit of your time before you start too appreciate just how much there is to do here.  Soon enough the limited combat mechanics feel natural and you begin to jump, juke and dodge the wide variety of enemies.   What seems like a simple, bare bones platformer quickly turns into an adventure that will swallow more of your time than you intend.  With that said though, the game probably could have shaved off and hour or 2 of gameplay just prevent the wearing out of its welcome, but more is better…right?

Coins you collect throughout each land can purchase upgrades to armour and weapons turning you into a powerful foe for all the baddies you’ll encounter.  Visiting you along the way is Merlyn, a wizard who aids you with wisdom, items and magic that assist you on your quest. 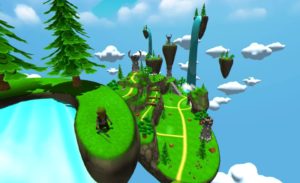 The levels give a grand sense of scale.

The audio as well stands out as better than needed, with the exception of some voice actors, who clearly need to hone their craft a bit.  Still, every character is given voice which is a nice touch to this budget title.  Add to that the melodic Celtic soundtrack and you can’t help but become immersed in this fantasy world.

The game itself will take anywhere between 6 – 8 hours to beat and will suck you into its charm.  It may not look the best (or even close to that) but the dev’s did pretty good job of fleshing out everything else.  If you have any interest in a Fantasy platformer than I think this is one to pick up.  Just give it time and it will grow on you.  When I first started playing I wasn’t impressed….at all, but once I got to world 2 I realized I was playing because I wanted to with “just one more page” keeping me up later than I intended.  It’s addicting and a solid game, you just nee to peel back a few layers to get to the juicy center.

What would I pay?  $20 is perfect imo, though I feel on this one some may disagree.  It’s a deeper game than it initially appears but some may not have the patience to see it through.

VitruviusVR Ltd provided theVRgrid with a review copy of the game and, regardless of our score, we thank them for that!