The Martian VR Experience is now available for download from the PlayStation store for $19.99US and developed by 20th Century Fox.   The keyword in that title is experience.  Though this title is a series of mini-games, the use of the term “game” would be a huge exaggeration.   Move controller support is the only control method available. 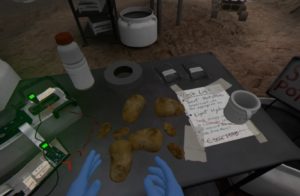 You get to sort potatoes in this game….Yayyyyy!

This is a direct tie to The Martian, released over a year ago in theatres, and feels like it should have been tacked on as a bonus on a 4K Blu-ray (wait…that wouldn’t work would it Sony?).  This is a collection of scenes and audio taken from that movie and interspersed with some interactive challenges.  The challenges range picking up stuff and putting said stuff in receptacles, pressing buttons, pulling levers or driving.  This is VR in its most basic form.

What shines here is the visuals.  Navigating your rover across the Mars landscape or watching an incoming storm is really fun to watch.  It’s just too short.  I completed this experience in around 20 minutes so and that includes viewing the cut scenes.  It really is a shame there wasn’t more content here.  Navigating your rover on a larger map could have been fun and the final mission does give you a sense floating in space but it’s just not enough.  The other missions just involve you moving objects around and they are boring.  There is also no flow here.  An over 2 hour movie has been cut down to 1/6 of that length so if you are actually going to play this, make sure you have seen the movie so you can fill in all the gaps.

The audio, as I mentioned is mostly ripped tracks from the movie with the exception of Martinez, who apparently has been in communication with you the whole time badgering and pestering you as you muck around.  I went through a level so fast that I had Martinez saying 3 lines of dialogue at the same time.  Top quality stuff here! (sarcasm) 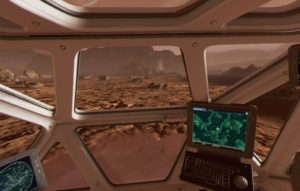 Most of the stages are also on a timer so they will just end after a few minutes of play regardless of what you do.  It’s actually crazy this costs money and the fact it cost basically $1 a minute is insane.  Even an option to revisit a stage just to mess around would be nice, but nope, you need to play this mess from scratch just to play around again.

Not too much else to say really.  This should be a free demo and feels so much like a cash grab it’s ridiculous.  Not only is this brutally short but titles like this actually hurt VR.  Everybody who was involved with the pricing of this game should be ashamed.  I have played other VR tie in content from TV and movies that offered more than this and those cost me nothing so it’s really hard to recommend this, just go watch the movie instead.

What would I pay? $1.  This is best served as a free download to help promote VR.  It strips the plot of the movie bare and contains the most basic VR interactions around.