After Spending a few minutes with this game, I was disappointed. I played it when it wasn’t VR and thought it was nothing special and giving it a virtual overhaul didn’t really do a lot for me. This game is an endless runner which has you running though fields and farmland avoiding the undead.  I should mention you need a bluetooth controller of some type to play this. My first impressions were actually a bit off. 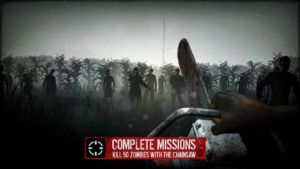 The chainsaw – You’re in for a bloody good time

A few more deaths and retries had me getting more into this runner.  The name of the game is go as far as you can while avoiding zombies, but the ability to wield weapons gives a nice little spin to this game,along with some helpful hounds to take out a walker or 2. The only mode I played was the endless running mode as I couldn’t, in the limited time I played, unlock the challenge content.  The menu says I have to unlock mission 4, but couldn’t find out what exactly that was. A quick google search tells me it something simple (like kill 5 zombies in a row) so I will go back into the game and try it out.

In summary, what I thought was another endless runner turned out to be an endless runner with some twists, and they work.  My biggest issue is the price ($10.99 CAD) which given what else you can find on the market for that price seems a bit high for what you get. As i said, i haven’t explored all content yet, but based upon what I’ve played so far it seems like $5.99 or so would be a more apt price. One thing I failed to mention is that although you have 360 degree Field of view, the action takes place in front of you and looking to either side is a meaningless option as all it will do is get you killed in the game.

Update: Unlocked “Stand Your Ground” mode. You basically stand in 1 spot while Zombies come at you from different sides and every wave of zombies you destroy advance you to a more difficult wave.  You get to choose 3 weapons (the more you play, the more you unlock) and limited ammo and you are on your way.  This Mode adds a little more game play to the game, but it does get old pretty fast. Fun to show friends, not so fun to play for an hour.

Update:  Unlocked Massacre Mode which is basically regular mode with a push on killing zombies as opposed to surviving.  Nothing too exciting here.  Also unlocked flashlight mode, which has you running through the same map without any weapons and armed with a flashlight that only recharges while it’s off, leaving you with only glowing zombie eyes to dodge, occasional lightning strikes light up the sky giving you a second or two of light before plunging you back into darkness.   It was fun for a run or 2 but the game basically remains the same.