Marksman VR is an archery-based wave shooter with a campaign format and dark, photorealistic visuals. This game feels generic and unprofessional at first but becomes extremely fun and addicting as it progresses. You play as “Zachery,” an archer tasked with reclaiming his kingdom, stopping the corrupt King Aaron and restoring peace to the land. In each level, you must defend a gate by eliminating the hordes of enemies that threaten to break it down. 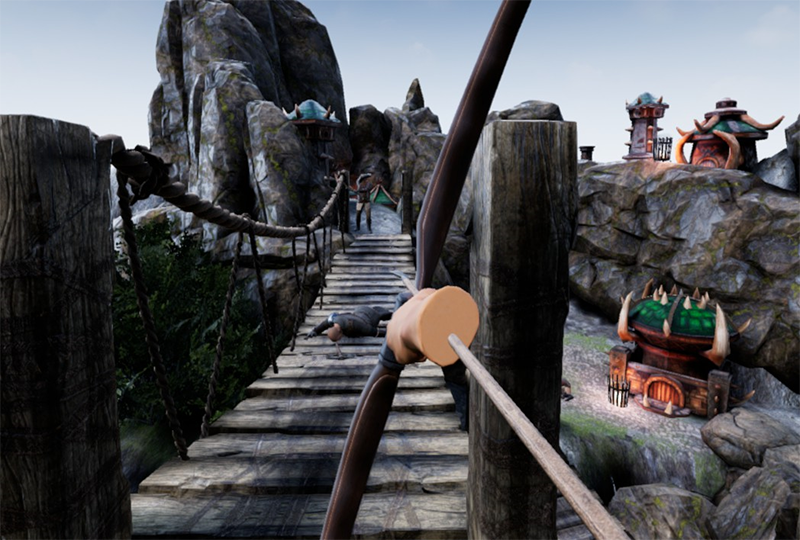 Enemy archers spawn alongside swordsmen and horsemen, and you must prioritize these targets accordingly

Your only weapon is a bow, which handles very well. I initially thought otherwise, as pressing the trigger to pull back an arrow will sometimes miss the bow, and sometimes requires multiple wonky attempts to do so before the arrow will successfully load. As my skill improved, however, I noticed that the bow isn’t actually as unresponsive as I thought; rather, the bow has realistically a small hitbox for pulling back arrows. If you’re quick and careful, you can see the arrow snap into place when held in just the right part of the bow. This is accompanied by a subtle, but helpful sound effect. Successfully using the bow was extremely difficult at first, but with skill, feels realistic and satisfying to pull off.

Marksman VR offers a chart of perk abilities, which can alter gameplay in unique ways. The game gives you a set number of points, which can be spent on as many abilities as you can afford. These include explosive arrows, homing arrows, a self-repairing door, and more. These abilities change up gameplay in unique ways. However, these abilities are badly designed and suffer from a serious lack of variety or balance. From the start, every ability is available to the player. Each one has a more advanced upgrade of itself, which costs more points than its predecessor.

The problem is that while some abilities are extremely useful, the majority are almost useless by comparison. This incentivized me to purchase only the best abilities, spending the whole game never changing my loadout. The best abilities, such as homing arrows, are granted as killstreak rewards that could have been integrated into the game without an upgrade system. For this reason, I believe Marksman VR’s entire upgrade system is arbitrary and obsolete. 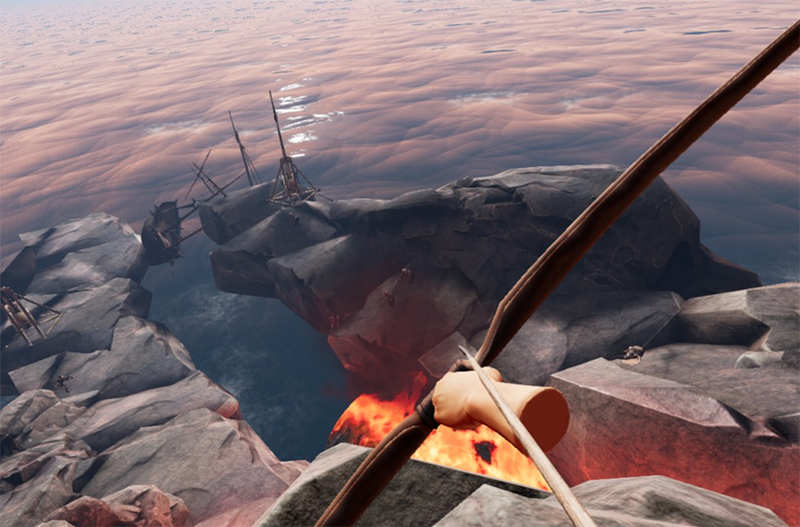 You’ll always be stationed in beautiful, picturesque environments while picking off enemies

Marksman VR is composed of many levels, which individually feel like stationary wave shooters. You must shoot all the enemies swarming in front of you, to prevent them from breaking down your gate. These levels are structured in a linear campaign format. They each take place in wildly varying, scenic environments. Some of these are beautifully designed, such as a tropical beach or a cliff face overhand. Some levels are structured in an entirely unique way, such as a level in which you sail the seven seas while shooting away neighboring pirate ships.

New enemies and challenges arise in many levels. Horseback soldiers race towards your gate, massive boss battles require you focus your arrows, and giant trebuchets launch boulders at you in regular intervals. Some environments contain booby traps, that make you get physically active as you dodge an onslaught of arrows. For the most part, these are great and only serve to mix up gameplay. The aforementioned boulder-flinging trebuchets specifically, though, can get extremely annoying. Boulders can be shot down with precision, so seeing one flying towards you isn’t a death sentence. When you’re trying to focus on the armies of enemies running towards you, however, a boulder flying from nowhere towards you becomes more of an annoying distraction than a fun one. After a point, trebuchets appear in every level- sometimes even with a second one next to it. While most environmental traps in Marksman are fun, the trebuchet gets incredibly irritating and makes the game overall less fun.

Each level is noticeably more challenging than the last, helping each feel different. This difficulty, which starts out pretty mild, becomes overwhelming and even rage-quit-inducingly frustrating halfway through the game. Still, this challenge keeps the game extremely addicting, and increases at a fair pace in each level. Marksman VR took me a decently long four hours to complete, though a lot of this time was spent dying.

Marksman VR uses gritty, photorealistic visuals that work very well. Lighting, physics, and blood spurt effects all work excellently. This game is gorgeous and offers better graphics than most other archery games I’ve played. Still, the game performs well with few glitches. Its user interface isn’t bad, but the main menu is designed a bit strangely. It makes you a giant, standing among the sized-down kingdom that you’re trying to protect. Grabbing orbs, that appear in a linear progression, sends you to a level within the environment that the orb was in. This system works fine but feels unprofessional and lacking. 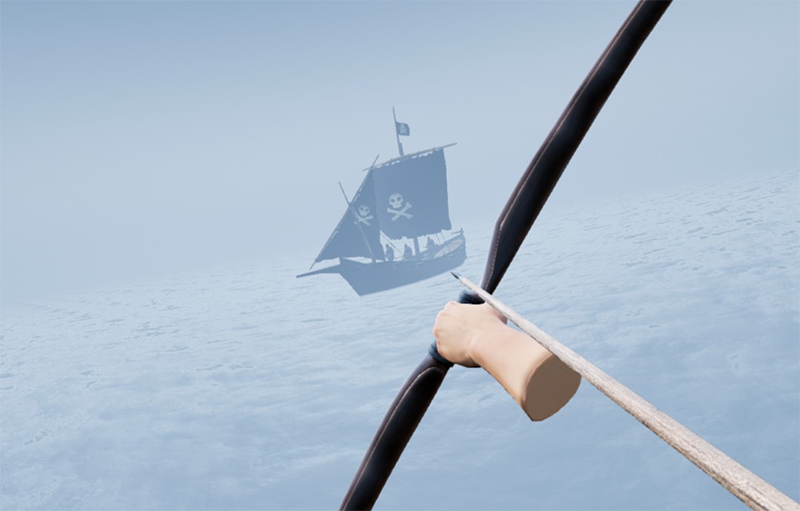 Even pirates can’t escape the power of Zachery’s bow

Marksman’s story is one of its weakest aspects. The game is structured in a linear campaign format, with a large variety of maps and contexts. Each level starts with a paragraph-long description of the events leading up to your next battle, and these captions are the extent of the game’s story. This is why it’s a shame they were written in terrible English, making some parts of the story almost totally illegible. Marksman VR very clearly tries to give itself some kind of story, even having an epic narrator describe it in the trailer. This story falls completely flat, however, giving me no concern over Zachery (sic- did they seriously spell the protagonist’s name wrong?) or stopping King Aaron.

Marksman VR suffers from frustrating design flaws and a weak story but despite those flaws is still exciting and addicting.  I’ll certainly be revisiting in the future. In terms of bow and arrow-based wave shooters with non-cartoony graphics, this title may be my favorite of its niche.

What would I pay for it?  For four hours of incredibly fun, tough-as-nails archery gameplay, I would probably pay $10 for Marksman VR, which is what it’s currently priced at.

Studio Trapcard provided The VR Grid with a review code for this game and, regardless of this review, we thank them for that!