Loading Human Chapter 1 seems to be a game that holds itself in high regards calling itself “the most immersive sci-fi adventure Virtual Reality has to offer.” It’s not.  What you do get is a first person narrative driven story that takes place at different times in your characters life and relies heavily on story telling and some busted control mechanics.

The game immediately starts you off in a tutorial room where animations on the wall tell you how to move in this world.  You have the option of using either a standard controller or the Move controllers, I recommend the move as it’s just easier…and that’s not saying a lot.  Due to PSVR’s limitations, you can’t turn directly around, the PS camera needs to see your headset to track it, and unfortunately the developer’s solution to that problem is not a good one.  Any movements other than walking forward are a pain; you can’t just turn on the spot, you have to turn your wrist in the direction you want to turn and press the “PS” button which rotates you 90 degrees.  Simply walking around becomes infuriating and other motions like ducking or opening doors is just are just as unintuitive.  Added to that is the precise movements you are required to make forcing you to fight with the controls all the time.  You also walk very slowly and with no option to run this game feels more like you are behind the controls of a tank than a human being. 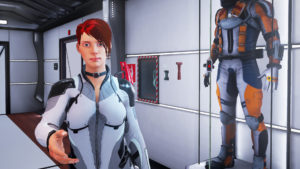 Shaking hands is only 1 of the many “fun” things you do in this game.

This game has been getting some undeserving praise for its visuals and I don’t get why.  It looks like any sci-fi game made EARLY last generation.  Character models look awkward and lack detail and while some environmental stuff looks alright, most of it is just average…compared to games that are a decade old.  I get VR is a little more taxing on hardware but this game just looks bland, not terrible, but nothing stands out as being awe inspiring.   You can interact with many objects around you which seems like a good idea, and every item you pick up has your character, Prometheus (seriously?!) giving a brief description of the item in question or a lamenting memory if that object triggers one.  After a few items, I just stopped picking up anything I didn’t have too.

The audio here too is unimpressive and at times laughably bad.   Whenever Prometheus talks, it’s typically deadpan, or full of overly dramatic emotion or just bad English.  Nobody else in the game is any better. Your accompanying AI spits out cheesy jokes and boring interactions.  Sound effects are fine and the ambient sounds do a good job of establishing that the world around you has been lived in.  Watch the news, listen to a record or messages.  Those little things help make this world seem real, but once done with those mundane activities, you are back to boring interactions and fighting with controls. 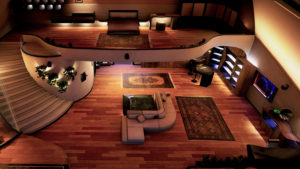 You are going to be so sick of this room!!!

The draw here is supposed to be the Story.  The ability to interact with the environment and the narrative as your character talks with those around him are the core of this experience, and if it was engrossing or entertaining than maybe it would save this mess.  The fact is this game is just boring.  Besides the opening tutorial, you are required to shave, put clothes on, find a book, turn a key, open a door, find an elevator blah blah blah….everything I just described will take you about half an hour to do.  That’s the game you are dealing with here.  Flashbacks take you to an earlier time and as the story progresses, past and present come together in a decent way and while the overall story is not terrible, all the elements putting it together ruin it.

There a few simple puzzles in here as well that are alright, but counter to that are insane tasks like lighting candles or placing a flask on a shelf.  It’s just boring and that’s too bad.You can beat it in about 5 hours or so, unfortunately this is only chapter one so the story is just starting. I was looking forward to a decent First Person experience and everything here is mediocre or worse and with the added terrible controls it, missed the mark on almost every level.  If you’ve been waiting for fully fleshed out, top quality VR First person game, you’re best bet is to looking somewhere else.

What would I pay? $15US seems more appropriate.  Control issues and a drawn out narrative hinder the fun, not mention the ask of purchasing only the first chapter in a story that may not see it’s completion if sales don’t show interest in the franchise