Where to begin…Incell is a roller coaster type game where you are in a ship traveling along organelles (tubular tracks) while avoiding obstacles and collecting proteins while a virus chases you.  That’s about it.  It’s the first game I have played that actually gave me that “vertigo” feeling that some people complain about.  Nothing crazy and a quick adjustment in my head movement remedied the issue, but it was there. 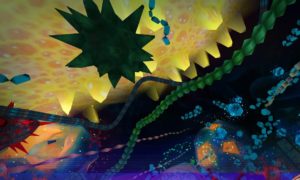 Given that shapes we see in these cells, I have to assume we are inside a Minecraft character

The look of the game initially impressed me but lost its luster…fast.  The screen is littered with tonnes of background objects and a very impressive draw distance. The objects in question are very simple, very NOT detailed shapes.  I realized pretty quickly that in order for this game to have the draw distance it has, the developers had to sacrifice visual fidelity, leaving you with a very “muddy” looking game.   Audio is fine giving you a slightly trippy song that lends itself to the game.   The missions are given to you by an AI that is a very….VERY poor emulation of GLaDOS from the portal series.  When she is just giving you mission details, it’s fine, but any humor given is worth an eye roll…every time.

I used both the headset controls and my Moga hero controller to navigate the game and found the controller easier to use as navigating obstacle just seemed to more natural than tilting my head in the direction I wanted to go so if you have a controller, use it.  As I said before, the missions and gameplay don’t change much.  I played through Level 1(of 3), which includes 6 mission, and I started level 2(7 missions) but quit as I was pretty sick of the game.  It’s a one and done kind of game and I don’t see it likely that I will play it again.  It’s fine enough but the lack of level differentiation makes this a throw away kind of game.