Mini-Mech Mayhem is a tabletop multiplayer battler where you have your own little mech face-off in a battle against 1 to 3 opponents.  The game board ahead of you is a large square broken up into a grid not unlike a chess board and the rules and actions you must adhere to and perform make this one of the more intriguing titles to grace our headset. 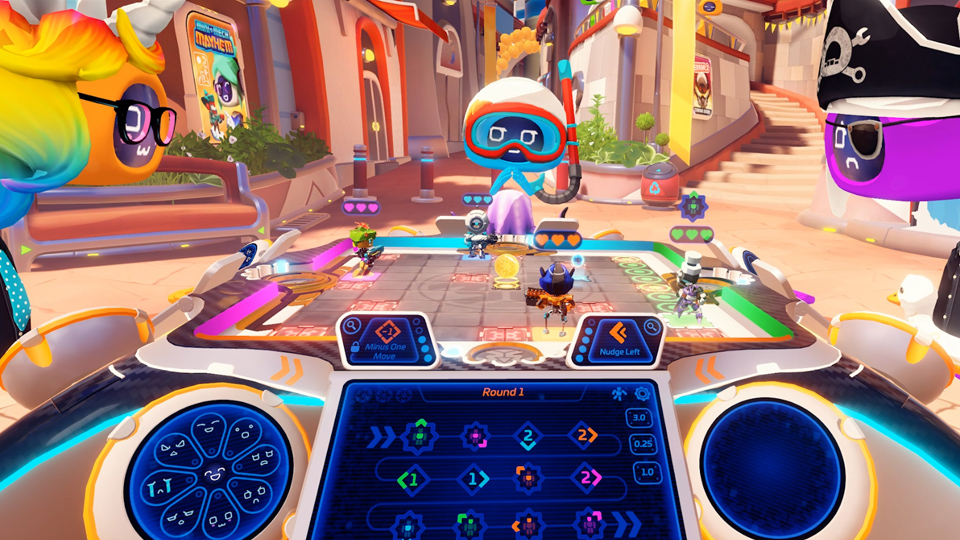 This is your battle arena!

You can use a DS4 or the Moves here and either method works just fine though having 2 hands in VR makes things a little easier.  Almost all the gameplay involves selecting actions on a panel in front of you.  An opening, and rather lengthy tutorial, explains all the games rules and mechanics and I highly recommend going through the base tutorial as this game has many levels with which to master.  You can place your mech anywhere along the outside row of tiles on your side.  Each game consists of the 3 rounds with the 1st person to get 3-points winning.  Each round you can perform 3 actions between moving or shooting but you can’t perform the same action twice.  Each action uses action points and the order in which these actions are performed is which ones use the least points.  Of course, you can’t tell what your opponents are doing which turns the strategy portion into a guessing game as you try and decipher what your adversaries are going to do and adjusting for that.  As you can’t perform the same specific action twice you must move or shoot in a different direction for each action in a round.  You can only move your mech in straight lines but can shoot in 45-degree increments or straight as well.  On top of that there are Intercepts which use up power you accrue every round or can be found in the map which can have dramatic effects on a singular mech or the whole board.  Points are awarded be ending a round with your mech on a specific point on the board or destroying an enemy mech.  like I said, play through the tutorial. 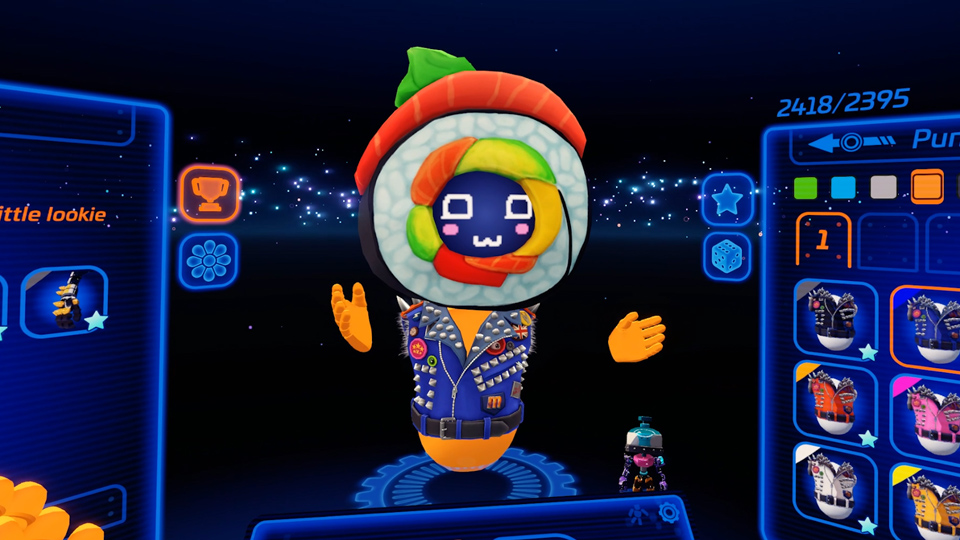 Customize to your heart’s delight…once you unlock stuff anyways.

Mini-Mech looks super clean and polished and the emphasis is clearly on being fun and friendly.  There is only 1 play area in the game and 1 board with the game taking place seemingly in the middle of a very cartoonish robot city.  Surrounding you are some onlooking robots who’s heads bob making them look alive.  Other light touches like flags moving in the breeze give some life to the area around but clearly the focus is on you and board in front of you.  You can customize your appearance as well as your mechs so when you face off against others, you’ll see a variety of whacky outfits and mech customizations.  Mech animations are exaggerated, cute and polished and as every player has an avatar, hands are tracked, and you can pick from unlocked emojis to showcase how you feel about a turn of events in the game.

Just like the visuals, the audio is super cute and friendly.  Your mech makes little digital noises giving it some personality with the lone looping track falling off into the background as you play round after round.  Nothing in here annoys, it just becomes background noise and yes, voice chat is supported allowing you to talk to the people you’ll be facing. 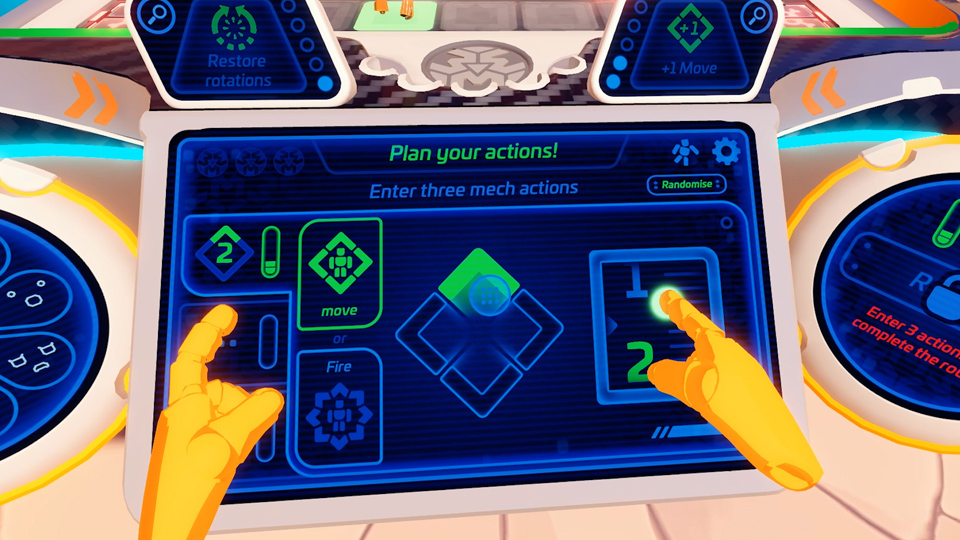 This panel is your friend, learn the panel…love the panel.

The level of polish is commendable, and I had more fun with this then I thought I would.  The game is incredibly complex meaning any kind of mastery is going to take a lot of plays.  There are plenty of intercepts to pick from, though the game only let’s you pick from a couple every round and thankfully each comes with a description.   With all the gameplay elements in here, I can’t help but feel that luck plays a very large factor in victories which can make those with the most resolute of strategies frustrated.  It never feels unfair as everyone must abide to and play within the games rules and mastering when to move, how far to move who or what to shoot and when to use intercepts will definitely help you out.  Additionally, the board has trap doors which you can push enemies on top of, and vice versa, and after the 1st round, each successive round moves the ‘goal’ spot but you stay in the same position from the previous round making for some interesting situations.   The game may look simple but it’s not, and after each match you are awarded points to spend on the store on more customization’s for you and your mech giving you a little extra motivation to get better.  I would like to see more avatar and mech customizations but more importantly would be a few different background and board theme changes just keep each match feeling a little fresh as the game does start to feel samey after not too long. 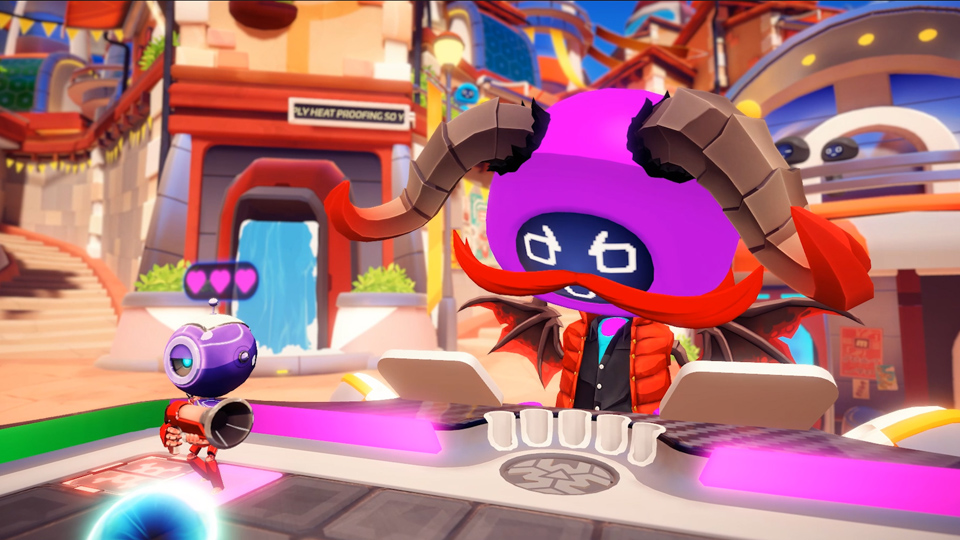 Everything in this game is crisp, clear and beautiful

Those issues aside, I really like Mini-Mech Mayhem as it just has a ton of charm.  If you can’t find online players, you can play against AI of varying difficulties but it’s not the same as battling human opponents though it’s still good practice.  The level of polish and charm here is undeniable and the actual game is complex and fun to learn.  The dynamic nature of the game is as much fun as it can be frustrating but as each game only takes around 15 minutes or so, it’s easy enough to turn right around and get back in the game.  If you enjoy tabletop battlers, this is a lot of fun!

What would I pay?  As much as I like what’s presented here as well the multiple layers to the game’s rules and mechanics, the price does seem high given that the best way to play is online which isn’t always a guarantee.  Add to that the limited customization options and singular play space and I think dropping this to $15 would not only justify the current content, but attract more players, which this game needs.