*Edit: The game’s October 7th update added physical customers, and a store window instead of random unlocks. The review has been updated to reflect this.*

Flairtender is a bartending simulator. You must professionally mix drinks, behind the counter of a bar, with an arsenal of beverages that expands as you earn more money. It had some fun moments, and I learned how to mix many drinks that I hadn’t known in the past. Although a great simulator, there’s little in the way of “gameplay,” making it somewhat boring at times.

Your objective in Flairtender is simple enough: mix every drink that is requested of you. Mixing feels intuitive and streamlined: pick up the required bottles and pour them into the appropriate glass, with the correct garnishes. Each glass scales out the metric weight of your drinks as you pour them, allowing you to measure out the perfect ratio of alcohol to mixers. This is a clever mechanic, as it allows you to bypass the careful scaling required for professionally mixed drinks in reality. Your variety in mixology is huge, as you have over a dozen drinks, several mixers, around eight garnishes, and half a dozen different glasses. This lets you feel like a legitimate bartender, juggling between progressively more complicated and unpredictable orders. 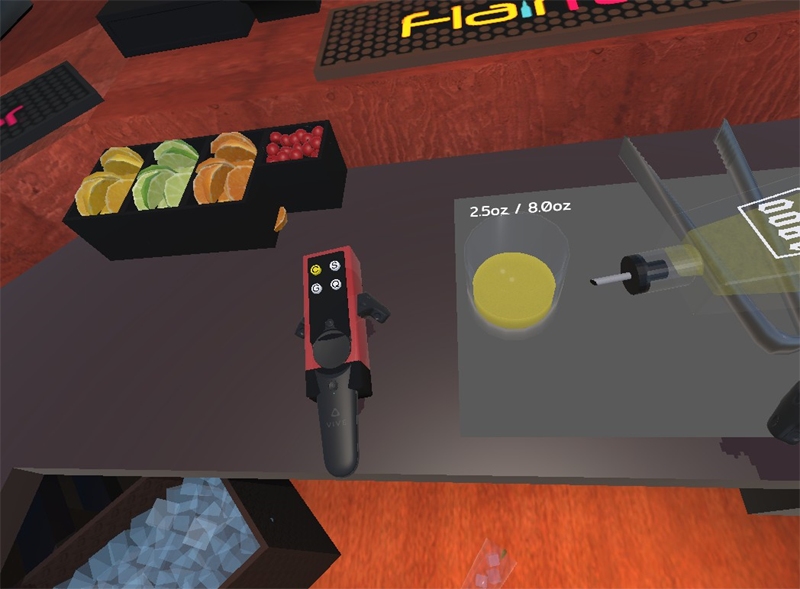 Flairtender features a computer, on your cash register, on which you can shop from a huge variety of drinks, glasses, garnishes, and bar furnishings. Although you start out with nothing more than whiskey, bowler glasses, and ice cubes, the tips you make off your whiskey allow you to purchase whatever you’d like to help your bar expand its menu and flourish. As your menu expands, your bar grows more popular to customers. This shopping method gives the player freedom to invest in whichever drinks they’d like, and is superior to the former unlocking system (which unlocked new items in a random series).

Regardless of your available drinks, your service isn’t disadvantaged by how few drinks you can mix. Rather, you initially can’t mix many. There’s no real objective other than pouring drinks to your heart’s content, and the only incentive to expanding your menu is to make gameplay more varied.

The main issue in buying new drinks is that it isn’t clear which liquors are most important for a wide variety of drinks. I never felt like I was truly enjoying Flairtender until I unlocked all the most important supplies, which aren’t highlighted in the shop. If I weren’t reviewing it, and were a player unenthused by real-life bartending, I might have gotten bored before realizing this.

Flairtender’s latest update added physical customers to your bar, lining up to place orders and tipping based on your service. Patrons mingle, mumble, and drink in your bar. Buying certain furniture, such as dart boards, even results in them using it. This makes the game substantially more fun than it was without patrons, adding some pressure to keep your business booming. 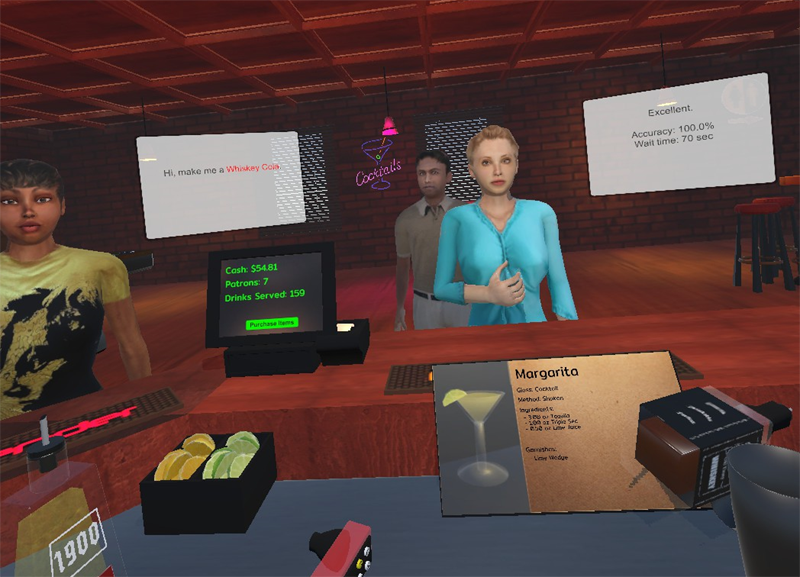 Customers add a crucial vibe to your bar, but what’s seen here is everything they do

It still has a long way to go, however- rejecting your drink (and happily ordering a new one) is the worst that customers can do, and the game is still devoid of any real “objective.” Typically, they’ll mindlessly grab their drink and take a seat, keeping the same monotone facial expression. There’s no fear of failure, nor is there any pursuit of high scores. Mess up an order? It doesn’t matter, just make a new one and you’ll make up the money you lost out on. It’s just you, your drinks, and the world’s most patient customers.

One mode that I thoroughly enjoyed playing around in was the drink creation station. Make the most obscure drink you can, your imagination being the only limit. Name and save your creation, and patrons will actually start ordering it when you tend bar. Still, this isn’t required to have a large menu: after buying the supplies your bar needs, real-life drinks will be frequently ordered that accommodate all the alcohol and mixers you have at your disposal. With such a high diversity of orders, and your creativity, Flairtender never gets old, although often highly repetitive.

Flairtender’s user interface is hit-or-miss. Your main menu contains a wide variety of options, both in game modes (although they aren’t very different from each other), graphics, and in gameplay. Included are some fun options, such as turning off gravity or switching to a tiki bar environment. While effective, however, there are some general quality concerns with the game’s UI. To select anything, you must hold one button for a laser pointer, and then simultaneously press another to make a selection, which can be annoying. Lack of room calibration is another problem; you must stand in the center of your room so the game renders the bar around you, as it starts. There aren’t any calibration options. After accidentally starting the game with my headset on my dresser, I’d often trip over my roommate’s bed while trying to reach for a bottle of vodka. The only remedy is to restart the game, which is frustrating. 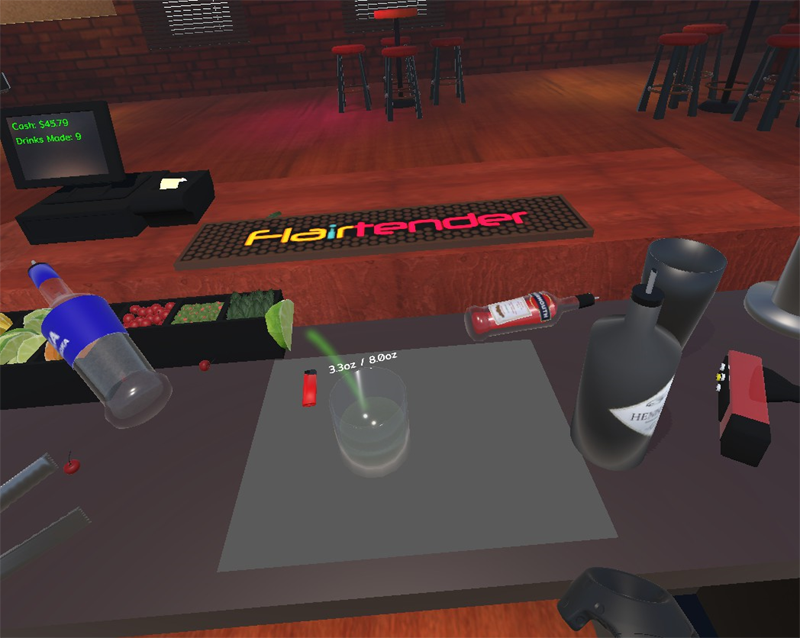 As you’d expect, your bar can become a total mess if you don’t clean up after yourself

What’s also frustrating is the lack of a “reset bottle position” option: after messing around, knocking bottles over, and throwing things around, I may find some necessary liquor bottles on the floor or under the counter: While bottles flung too far from the bar do respawn, the bar is big enough that bottles dropped from a certain distance may be difficult- if not impossible- to pick back up, sometimes leaving you stuck with recipes that you can’t fulfill. This could be easily fixed with a button that puts bottles back in their respective position, but no such button exists.

Flairtender’s graphics are unimpressive, consisting of uniform colors and flat textures. Your hands are also undesigned, leaving you wielding your two Vive controllers in-game, which feels a bit like an unprofessional design cop-out. Despite these flaws, the player can at least take solace in the phenomenal soundtrack. It’s smooth, non-repetitive jazz which fits the gameplay and often relaxed me into playing more even when I’d otherwise have quit. One of my housemates even came into my room while I was playing, to comment on how much he was enjoying the music. Where it lacks in gameplay, Flairtender makes up in simulation quality and ambience.

What would I pay for it?  Priced at $15, Flairtender feels overpriced for me. If its gameplay was improved, and its issues were fixed, I’d consider 10- maybe 15 dollars a reasonable charge. However, its appeal largely depends on your mindset. If you’re a bartender, or you enjoy mixing drinks, you’ll feel right at home with Flairtender’s attention to detail and diversity of drink options. I had a lot of fun with it at times, but it felt bogged down by numerous issues and lost potential.

DigitalBadger Design provided theVRgrid.com with a review code for this game and, regardless of this review, we thank them for that!