Right off the hop I think I need to explain that Intruders: Hide and Seek isn’t really a game.  For certain it has gaming elements, but Intruders plays out much more like an interactive Suspense/Horror film with you as the main protagonist trying to save your family from said Intruders.  You play as a young boy named Ben who is supposed to be on vacation with you father, mother and sister but on a return trip home just before leaving, things go sideways quick as some unscrupulous folk take your parents hostage while you and your sister were playing around in your family’s brand-new escape room.  It’s up to you to save your family without getting caught by the bad guys. 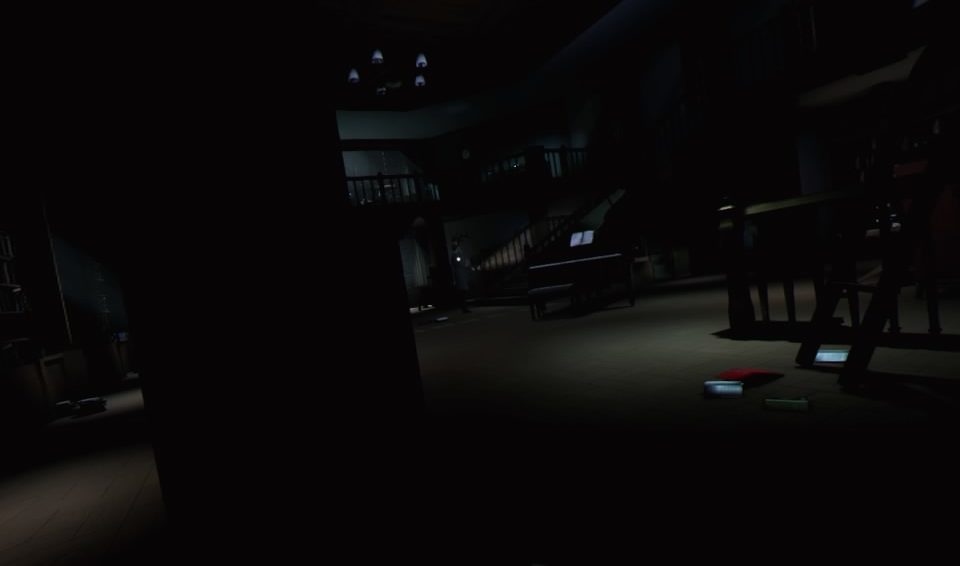 The darkness is your friend!

This is also playable out of VR and the only method of control is the DS4 making this control like a typical First-Person title.  The name of the game here is stealth.  The villains have cut the power, bathing the house in darkness save for some natural lighting and both yours, and the intruders flashlights.  It’s those flashlights that let you know of the enemy’s locations, and when they talk to themselves, so you must sneak around the house as carefully as you can.  As a small child you can hide in large cabinets, closets, lockers and so on in case any of the trio get to close with the better option being not to have to hide at all.  You can run, walk or sneak around with each method causing some to almost no noise at all and for the bulk of my playthrough, I snuck about, unless I knew for certain that no one was nearby.  The game is very linear, playing like a movie, with levels broken up by missions like finding your parents or going to get medicine for your sister and as you complete these tasks, the story moves along.  Should you be seen at any time, you’ll more then likely get caught (I never got away in these situations) and get a rather disturbing little cut scene, causing you to start back at the last checkpoint to try again.  Your flashlight is on demand but be careful when you use it lest you be seen, and you also have access to a map of the house that features which room you are in and where your next objective lies. 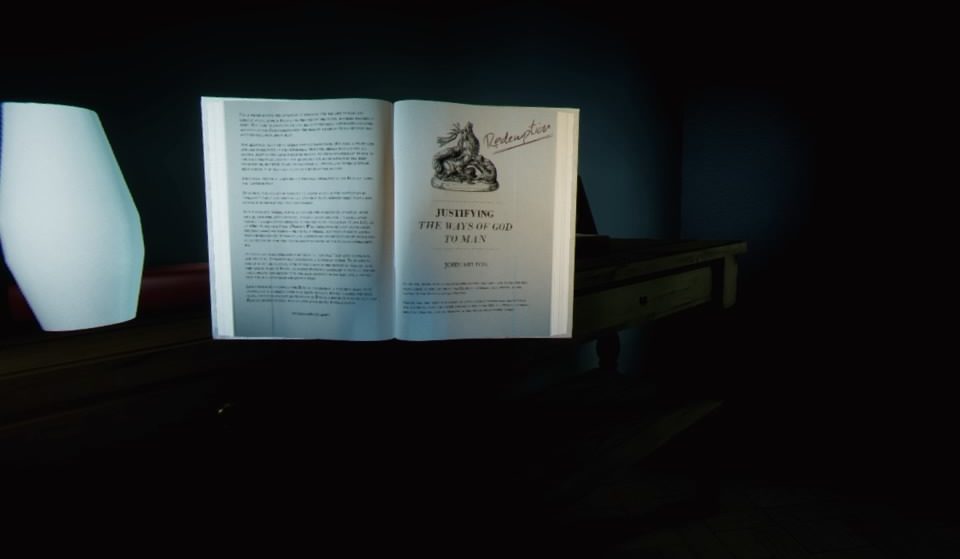 Intruders, of course, is a very dark game.  The majority of this experience takes place inside your very large family home which, even for its ridiculous size, feels very authentic and lived in.  As these criminals are looking for more then just cash, the house is in disarray and it’s in your best interest to memorize the routes in the house and which doors may be inaccessible.  The house is easily the star of the show here as, minus the main bad guy wearing the very creepy deer skull, the other character models look…off.  They aren’t awful but the devs went with a slightly cartoonish look to the human models which just made me take them a little less seriously then I probably should, at least until they caught me.  The mini cut scenes when you get caught may cause some to be squeamish as they portray violence towards children, but I do think they are very necessary at setting the tone that this is more then a stealth game, it’s also about survival.  Like any good ‘locked in a house’ type film, the events in the game take place during a thunder storm giving your surroundings a flash when lightning strikes and adding an overall sense of unease no matter where you are at in the campaign.

Unfortunately, the audio suffers a little thanks to some ‘B’ movie level performance from some of the actors at play.  This doesn’t bother me as much as it might others as this whole game really embraces the horror genre, which is often a little over the top, but let it be known that some of the acting in here is a little underwhelming.  Sound effects are much better with your and the enemy’s footsteps being audible as you all move about the house and the sounds of the storm outside really make you feel isolated and alone.  Suspenseful music pops up during stressful events, giving this game a very cinematic feel. 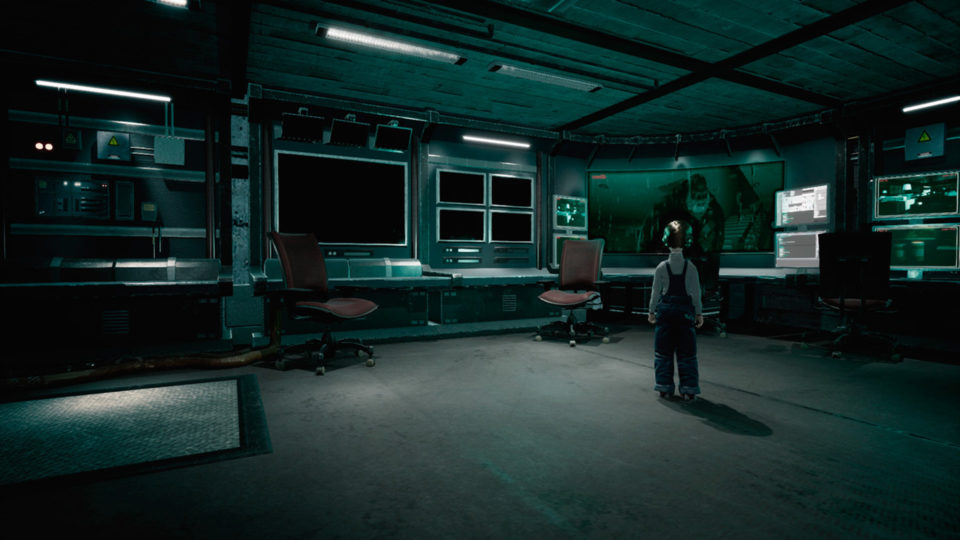 Your sister helps guide you through the house.

I love stealth games and I love VR stealth games even more and there is undeniable intensity knowing you are a small child eluding very dangerous foes.  Sadly, the stealth mechanics in here don’t quite always work the way they should.  For instance, lightning strikes lighting up the whole house, but even when one of the crooks is looking right at you, if you are out of their site range, they won’t see you.  Like the Metal Gear series, the enemies sight range is indicated by a cone, represented by flashlights in this game, which is very typical of the genre so as long as you stay out of that cone, you are safe.  This can lead to some odd moments where the bad guys are so close it would be impossible for them not see you, but they don’t. The exact opposite also happens as on a few occasions’ enemies spotted me through walls or at odd angles that they shouldn’t have forcing a restart to the last checkpoint as they inevitably caught me.  Overall the game works and the checkpoint system is forgiving enough to move past these hiccups quick enough but be aware that the mechanics in here aren’t as polished as they should be.  Audio effects can also be a little hit an miss and there is some great use of 3D audio at play, letting you hear the enemies to help determine their locations, but you may hear them talking through walls or even the floor above or below you, ruining that audible clue as you have no idea where they may be looming.  I ended up ignoring their talking when it came to figuring out where they were and just stuck with looking for the telltale light from their flashlights.  I also encountered a glitch that put me in the environment causing the screen to go black forcing a quit to the main menu to reset myself though this only happened twice during the 2-hour(ish) campaign. 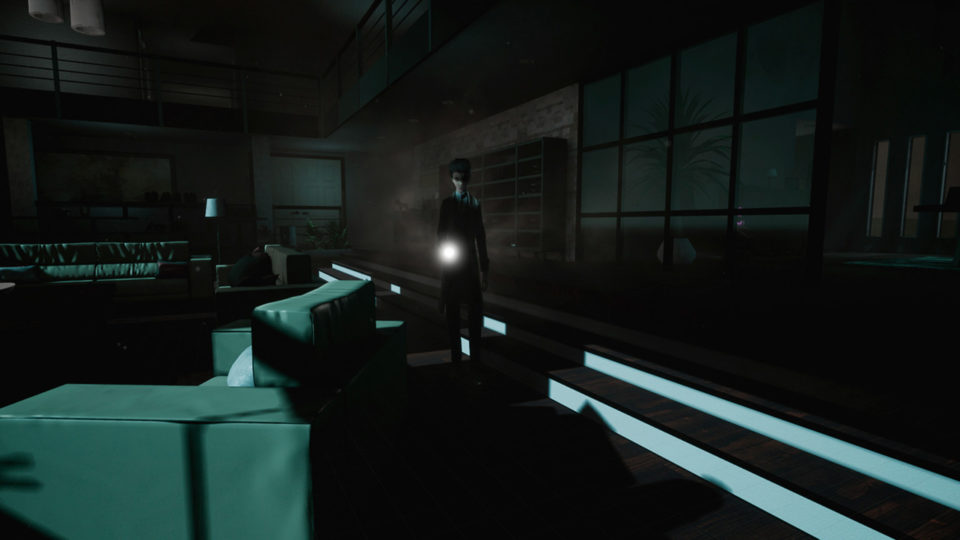 Don’t let them find you!

By the time I reached the end of the game, I was satisfied with the overall experience and thought it was a fun little romp in VR.  The story in Intruders plays out like many films in the trapped in the house genre and brings very little new to that tried and true formula, even with the surprise twist in the latter half of the game.  Still, even though it has a feeling of been there done that, you have never quite done this in VR before and while it’s not perfect, I enjoyed the B movie presentation and mechanics.

What would I pay?  The $20 price tag still seems a tad high given the total package and dropping the price by $5 seems a little more apt.  It’s a linear tale, minus one choice at the very end, and the game lacks a fair bit of polish though if you were a fan of the stealth bits in Resident Evil, this will be right up your alley.

Tessera Studios provided The VR Grid with a press code for this title and, regardless of this review, we thank them for that!