I honestly can’t count how many VR burgers I have made since donning my 1st headset back in 2016.  Job sim games involving the crafting of burgers seem to a be a genre of their own with at least 4 coming to mind that task me with feeding the masses.   I’m Hungry is the latest in food prep games and has you manning a food truck as a variety of customers flock your way looking for a quick meal. 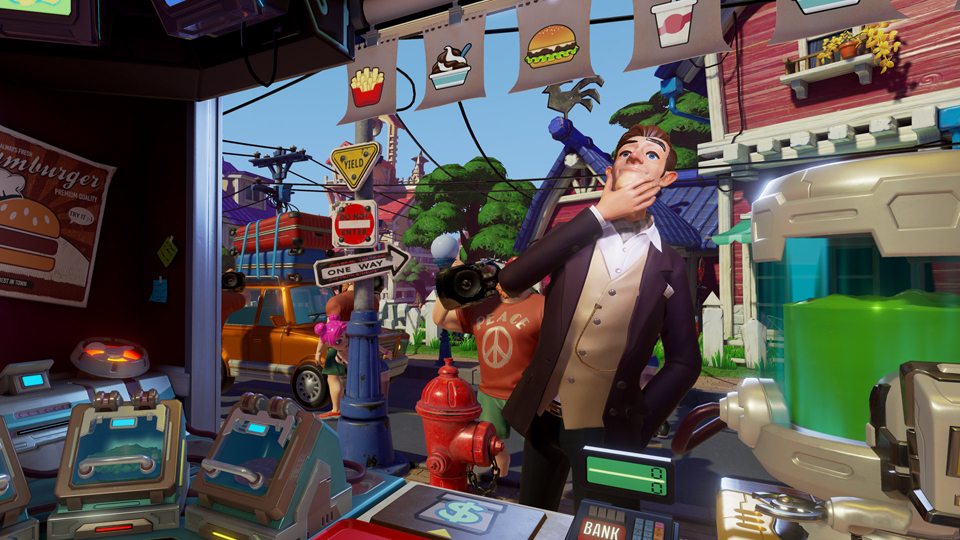 Your customers come in all shapes and sizes!

At this point, you know the drill.  Job sim games mean you need 2 move controllers as you’ll be performing a variety of tasks around you as you serve up 4 types of foods.   Each food type has its own station nearby with burgers needing you to grab the buns, meat lettuce and one of 2 sauces.  Sundays just need you to put a cup in the ice cream machine and pull the lever, same with the soft drinks.  Lastly would be fries, which need to be dumped in the basket, fried and packaged.  Each stage has a 6-minute timer and in that time, you need serve a select amount of people and earn a minimum amount of cash with you needing at least 1 of 3 attainable stars to unlock the next stage.  If you screw up making an order you lose money and if you mess up making the food or toss it in the trash, that’ll also cost you some cash.  There are 2 stages in here with 18 successively harder levels each and should you save up enough coin, you can upgrade each station.  Things get a little spicy when people order golden items, which require to shake or make the food in a specific way to turn them gold, giving you more cash.  Also available are 2 endless modes which are unlocked after you complete each stage. 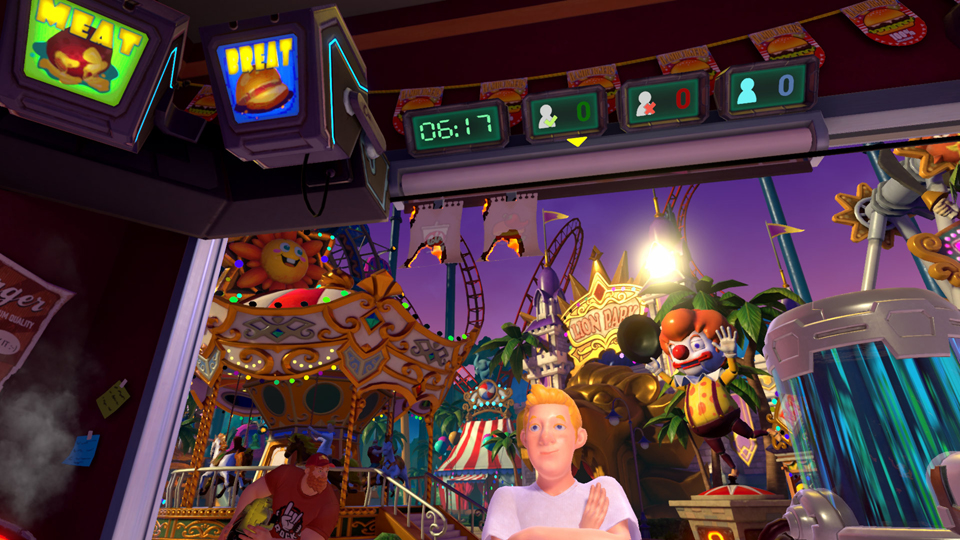 Always be aware of the clock!

The art style and visuals impressed me with every aspect of this game having an exaggerated and cartoonish look to it.  The entirety of this game looks blurry, but the presentation is top quality.  The machines around you look wonderfully animated as they put together your food items, shaking and vibrating in satisfying fashion.  Customers walk up to your truck, hem and haw for a second or 2 (or more) before placing their order.  Each one’s animations are pre-rendered, so you’ll see the same few actions from each model over and over, but they look well made and as you get further in the campaign, more new customer types pop up.  Every time you complete an order, they will react positively or negatively based upon how accurate you were before shuffling off to the side for the next customer.  The 1st stage takes place on a seemingly quiet neighbourhood street with the 2nd stage, Winking World, taking place at a carnival.  Backgrounds look as good as everything else with your line growing until it’s out of site and other distant animations keep each stage looking vibrant and alive.

Typical of the genre, a harmless singular track plays during the game that does get a little tiresome after long plays.  Your customers greet you with exasperated sounds eliciting excitement or thoughtfulness as they peruse your offerings and never actually speak words, just sounds of happiness upon a successful order, or frustration if you messed something up. 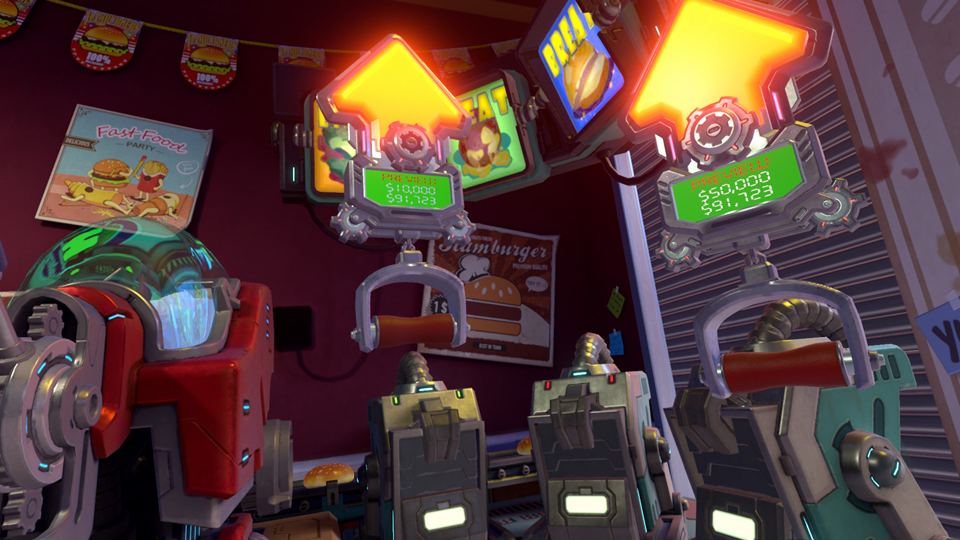 The upgrades are expensive!

My 1st impressions of this game were very positive.  Despite the blurry visuals, I still very much enjoyed the presentation and polish pervading the game.  My positive impressions took an initial hit when I went to go and check the price of the upgraded machines, which is $10, 000 each.  With each level only offering a few $100 at a time, these upgrades seemed near impossible to get short of repeating stages over and over again.  The 2nd hit came when I realized that the stages offer randomized customers which wouldn’t matter to much save that each one orders different from the others with some taking longer to order or pay you.  Once trench coat wearing idiot saunters up to the counter and takes around 16 seconds to order, hemming and hawing at the menu in the most annoying of fashion.  That same character also takes his sweet time bringing up his payment and as time is a precious commodity in every stage, the amount of time wasted by the AI is ridiculous.  As I said, the customers are random so depending upon your luck, you may encounter 1 or 2 of those fools in a round, or look at the line of people and see 3 or 4 of him waiting to kill your chances at a solid run on a stage.  That golden food I mentioned earlier also is harder to make then is explained and attempts at making that food also waste precious time.

Prepping food was the key to bypassing the 1st stage, but by the 10th or 11th level, it was becoming apparent that success relies upon the right customers.  The 2nd stage mixes up the action be removing customer orders mere seconds after you see them, so memorizing is key.  The endless modes just offer more of the same and after playing the main game, I had no desire to venture back in without purpose.  Oh, and every time you finish a stage, you get not 1, but 2 separate messages about not moving around your play space too much, forcing you to stare at that text to bypass one message and click through the next one…EVERY TIME YOU FINISH A STAGE, win or lose, which is ridiculous. 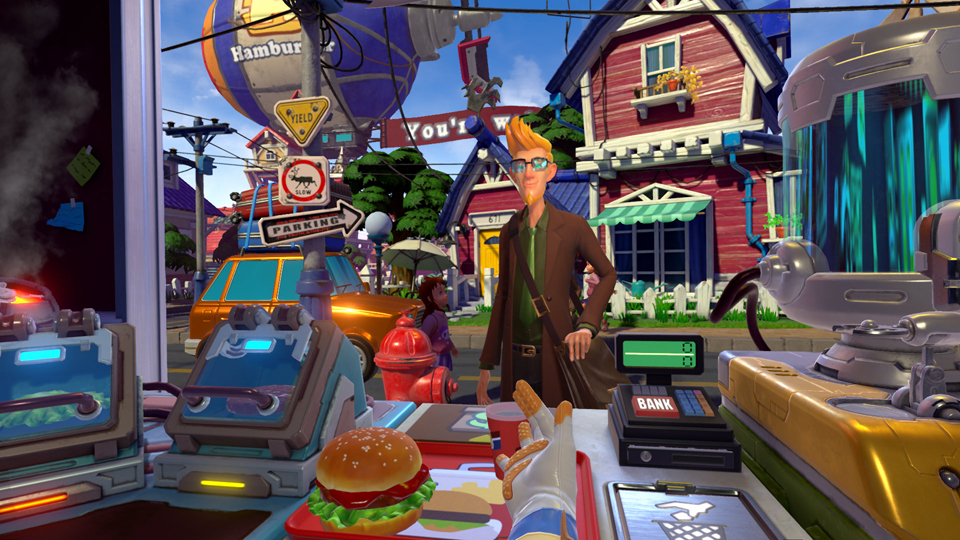 I absolutely hate this man!

I’m Hungry becomes too unfair to be fun with randomized customers and excessive grind.  Playing in the hopes of upgrading my machines is an exercise in repetition and irritation.  What started out as a fun and friendly job sim title turns into a slog, demanding more and more from you while never giving anything back but frustration and annoyance which is honestly just a shame.  This could’ve been a great and fun pick up and play job sim title, but instead turns into one of the most maddening experiences I have had in the headset in recent memory.

What would I pay?  All the stuff I love about this game is underwritten by the flaws.  This is $20 US and had the game been more fair and friendly, it would probably be worth that.  The unfair nature of the game combined with excessive grinding needed to balance that unfairness makes this something I wouldn’t recommend spending more then $10 on.

Winking Entertainment provided The VR GRid with a press code for this title and, regardless of this review, we thank them for that!