Flight in VR really seems like winning combo.  Many games have tried with varying degrees of success in their individual delivery.  Eve Valkyrie nailed the combat aspects of flight and Eagle flight accomplished fast paced flight through abandoned France with moderate success while others have introduced their own twists on the game type.  How We Soar definitely stands on its own in this increasingly crowded genre, but it plays out more like an experience than a game. 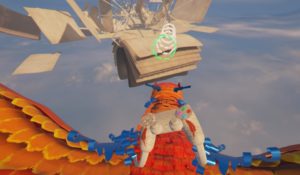 The style and visuals of this game are definitely worth checking out!

The prologue level introduces you to all the mechanics of the game with some rudimentary flying through hoops, collecting orbs and “painting” your surroundings.  Taking place in the thought process of a struggling writer (that’s how I interpreted it anyways) you must fly through hoops to unlock new sections of a story while collecting orbs to animate those sections into the proceeding narrative.  If that sounds dull to you, that’s kind of because it is.  That’s not to say it detracts from the gameplay here, but this is much more of a zenful, relaxing ride in VR than an action packed game.

Initially I was taken aback by this and it seemed like a missed opportunity on the developer’s part to make an engrossing, higher paced game.  However, turn you gaming brain off and turn your experience brain on and it is quickly apparent how much care went into How We Soar.  Initially I thought the phoenix flew way to slow making sharp turns nigh impossible.  It wasn’t until the 2nd level where I realized that this flight mechanic was designed to force you to enjoy what is unfolding around you, because if you flew any faster, you would just miss what was happening around you.  I really can’t stress that you need to be in the right mindset to play this, but once you are there, there is a lot to enjoy.

The game starts you off on the back a Phoenix and it is immediately visually impressive to look around.  I honestly just watched the wings flap for like a minute just because it looked so cool.  Rings up ahead tell you automatically to fly through them, collect orbs you see and catch the AI phoenix at the end to advance to the next stage.  The levels all take place in an endless sky with scattered books and pages all around you.  Completing the above tasks has pages folding in on themselves, creating images and thoughts from the authors mind as he tries to put together his own story.  Watch these pages float together to become monstrous structures and creature is a sight to behold. The visuals here are very impressive and even far away objects look really good, except for the rings, but I’m nitpicking.

The audio as well is also outstanding and adds a lot to this experience.  The flap of your wings (and your slow speed) lets you know you are on the back of a very large, magical bird.  As the story progresses each level offers localized audio effect like the sounds of battle while near an army or keyboard clicks from a laptop and a tonne more (I don’t want to spoil anything).  Some narration from the author as well lets you into his thought processes and he struggles with his work.  The audio here is really something to enjoy and needs headphones for full effect.

Once you figure out exactly what this game expects from you, progressing through each stage can be relatively fast.  Depending on the level there is a differing amount of orbs to collect.  Simply hitting any of the face buttons shows how many orbs you have left by displaying them on your DS reigns attached to the Phoenix.  The 2 mechanics I didn’t mention were that jerking your DS controller gives you a burst of speed, but I rarely used that, except when chasing the other Phoenix.  The second is that when you fly close to all the paper constructs, you bring them to life by coloring them or even triggering some more subtle animations, adding to the scene around you.  Fully coloring these scenes will suck up a whole bunch of your time, but it isn’t necessary for game progression.  Doing so does make the level feel complete though, and you will get a few achievements for your efforts.

Flying into objects just has you respawn and continue as if nothing has happened.  My biggest annoyance with this game was catching the other Phoenix’s.  Your phoenix is large and slow, even while boosting, and early on these birds are easy enough to catch but later levels have them performing maneuvers that don’t allow you to keep up.  The key for me was to anticipate where they were going to go and adjust and that failed more often than not.  The issue here isn’t so much the challenge but rather how it breaks up the story telling.  Unlocking the next piece of the story, only to have to run down these damned bird just became frustrating and almost an unnecessary addition to a very serene game. 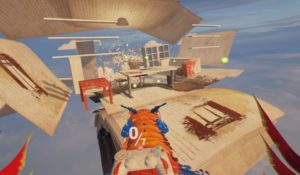 This title overall is way more interactive story than game.  Orbs and rings are never too hard to find, coloring the world around you makes some impressive added visuals and the narrative in each level, though brief, does create a cohesive story.  Flying around and through these levels, ranging from fairly small to almost too big, is a delight once you settle into the flight mechanics.  With a completion time of around 4 hours to complete there is a lot of content here, not including trying to color everything around you which would probably add a few more hours as well.  The story, and the way its told, also pulls you in as had me looking forward each chapter.

Ultimately this is way more story than game.  This is an easy going experience (minus the bird chases) that just might not appeal gamers looking for more excitement in their games.  That said, if you are looking for a very laid back, very zen like experience than there is definitely something here for you as this offers a very creative art style with accompanying visuals, amazing audio and an engrossing story and all of it with an interactive VR twist.

What would I pay?  $19.99US is perfectly priced.  It’s an experience worth checking out, especially for those into narrative driven interactive stories.  Flying is very freeing and the game itself is just a nice way to wind down from other, more intense, games. It also has a length way longer than the asking price might lead you to believe and it’s hard to complain about that.