What we have here is an online tabletop horde style kind of game. A little on the cutesy side, you pick you character and spawn in an online arena with up to 4 other players, where upon you are supposed to attack waves of enemies.  Goblins, mages, trolls and so on appear around you in a small arena for you to dispatch.  Basic button mashing here w/ jumping and power attacks as well. Forgot to mention you need a controller for this baby.  Leveling up after a bunch of kills grants you new weapons, items and appearance modifications. 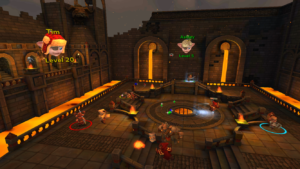 Your standard view of the action

This game looks on the prettier side of things with a cartoonish style lending itself well to the VR headset.  Everything is clear, Enemies look very distinct.  The view is from a mounted camera for each level so it isn’t exactly the most immersive experience, but not everything has to be.  Audio is fine nothing crazy, but nothing that hurts the game either.   What is interesting is that Herobound supports a headset so you can talk to and coordinate your attacks with whomever you’re playing with…kind of cool!

Overall this is a repetitive game, but the added social aspects and loot system and the price point(FREE!!!) make this a great download for those into these types of games.  It’s not exactly my cup of tea, but as it stands, definitely a standout game so far.