I really enjoy quirky and unique uses of VR and how you use controllers like having your hands bound together in Statik while holding a DS4 or holding one of your controllers between your legs to simulate riding a stick horse in Hopalong The Badlands.  Those different takes on how we use the things in our hands add extra levels of immersion and fun to whatever game has them yet we really have only seen a handful of titles that go beyond having just your hands in VR with one of the more recent ones being Hell0 Puppets!, a VR comedy/suspense title that has a sentient puppet stuck to one of your hands and it’s up to you to work together to escape the mad house you find yourselves in. 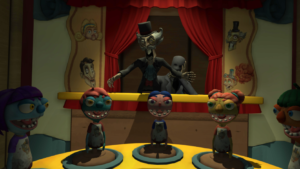 Choose your puppet and let the games begin!

Environmental puzzles are the name of the game here as you navigate the remains of a dilapidated television studio where a failed children’s show “Mortimer’s Handeemen” was filmed which featured a group of puppets.  With your trusty puppet Scout, it’s up to you to solve the puzzles put before you which may be as simple as pressing a button at the same time as your puppet by lowering her down while she counts down to the press, finding and placing items found in the environment and some more challenging ones that will test your brain.  You can freely walk through the stages with comfort options being limited to blinders on or off and unfortunately, click turning is your only option.  You can run or walk with running being needed during a few chase sequences that pop up during the 2-hour campaign.  As this is a horror title, much of the game is bathed in darkness though Scout is equipped with a dim flashlight that provides a little light to help you see what’s nearby which you activate by tapping her head.  During some sections of the game you’ll have to control Scout as some puzzles require some tinier hands than your human ones.  You’ll have to avoid a few enemies as well adding some light stealth elements to the story so while it may be on the shorter side, it’s always introducing one mechanic or another and never gets boring or repetitive. 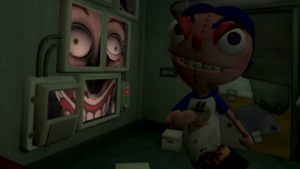 The look of the game is very cartoonish with a bulk of the characters and enemies you meet being puppets themselves though the star of the show is Scout, who oozes personality as she talks directly to you and helps or derides your efforts in comedic fashion while being just as scared of what’s around the next corner as you are.  Despite those cartoon visuals, the horror elements in here work surprisingly well as you navigate the catacombs beneath the studio which has since been taken over by Mortimer, the lead puppet from the show.  THrough the use of some dark magic, some very disturbing puppets seem to have come to life and worse, enslaved their humans allowing them to traverse the studio.  You’ll visit a few different areas in the studio all centered around Mortimers Handeemen so you’ll see a puppet design room, makeup room, the studio and a few more weird and freaky places that do a pretty good job of making you always feel uneasy.

For reasons I won’t ruin here, you are a silent protagonist though Scout will constantly talk to you and ask you questions.  When she asks you a question you can nod your head yes or shake it no further solidifying the bond between yourself and the little foul mouthed muppet on your hand.  Despite the cartoonish visuals, this game is not for kids as Scout has no issues belting out swears making for some very hilarious and comedic adult moments.  The other puppets you meet are all excellently voiced and include a few insane characters that are fun to listen too.  The creep factor is further amplified by the ominous soundtrack which will keep you on the edge of your seat (if you play sitting) and while I don’t get scared often in games, there may have been one or surprises that had me flinch…just a little bit. 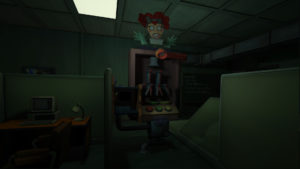 The game starts off with a series of co-operative games for you and Scout.

As I said, I love quirky uses of VR and having a puppet strapped to your hand that you have to work together with to survive this macabre studio was an absolute treat.  Unfortunately, technical issues do get in the way throughout the campaign.  As Scout, you can actually “fly” around the environment, but this was never explained and during one section of the game I had to lift scout high to look through a vent.  It was impossible to reach that high, even standing on a chair (and hitting my ceiling) and it wasn’t until I accidently pressed a thumbstick while controlling Scout did I realize I had the option.  Running is also finicky with that faster speed activated by pressing the right thumbstick down but it was seemingly random whether I would run for a few seconds or not as the game would just randomly slow me back down to walk speed.  Lastly would be a glitch during one of the puzzles that prevented me from grabbing items needed to solve it with the workaround being to place a key in a hole BEFORE I had even activated the trap that was holding me up.  Trial and error got me through all of my issues so I don’t hold them against the game too much, but they are present. 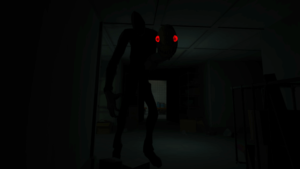 Beyond those issues is a satisfying, albeit, short game that does a great job at pacing and from beginning to end I had a lot of fun!  Scout is very entertaining and without her this game would just be another walk-a-thon puzzler but her presence adds a new layer to the puzzler genre.  If you’re looking for scary, comedic and unique puzzler,  then Hello Puppets! is for you!

What would I pay? This is $20 US I’d say that’s an ok price if my issues were addressed and smooth turning was added.  That’s not the case now so with that in mind and the fact that this can be beaten in less than 2-hours, I think $15 is more appropriate but like I said, I had a great time all the way to the grand finale!

Otherworld Interactive provided The VR Grid with a press code for this title and, regardless of this review, we thank them for that!