In Green Hell, you assume the role of Jake Higgins, an anthropologist who, with his wife Mia, travel to the Amazon rain forest to visit and study a lost tribe of people called the Yabahuca that reside deep within the jungle.  Naturally, things go sideways, and you are left to fend for yourself, surviving by your wits as you try and stay warm, eat, craft tools and fend off everything trying to kill you and, in the jungle, it seems like just about everything IS trying to kill you. 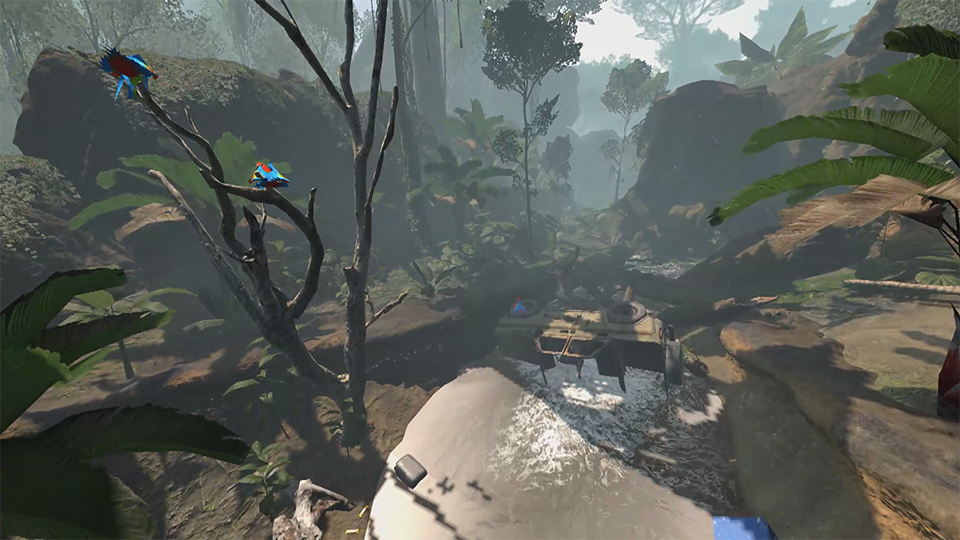 Welcome to the jungle…it gets worse here everyday.

As soon as you start you are treated to a lengthy 1st time loading screen before being given a few basic comfort options with more being available once you get to the main menu.  There are 2 modes to choose from, campaign or survival and I highly recommend the campaign as it includes the tutorial but also slowly introduces many of the obstacles in your way as well as your crafting options and breaks down everything you think you need to keep track of to survive.  Survival just drops you in the jungle and asks you too see how long you can survive, typical of this game type.  There are 4 different difficulties for both modes from Tourist to King of the Jungle with the easiest focusing on story and turning off hostile tribes, predators, nutrient depletion and going crazy with the hardest having all of those turned on and the middle ones balancing those to varying degrees.  For my first time playing, I chose the 3rd difficulty option ‘Welcome to the Jungle’ and proceeded to die more than few times (after the tutorial) thanks to my lacking survival skills in combination with the amount of stuff I had to contend with.  I fell once and died, ate a bad mushroom; died, bit by a snake; died, drank some funky water; died and so on.  You can store items on your sides and carry a trusty backpack that works almost identically to the one in Saints & sinners with a walkie talkie and notebook on your chest.  That notebook is pivotal to your survival as not only does it have a map and tracks objectives, but also lists everything you can craft as well as recipes and information on the flora you’ll find.  More important than the notebook though is your extremely high-end smart watch with GPS that shows the time of day, provides the option to rest, any ailments or infections you are suffering and monitors all your vitals.  Items break, food rots, wounds fester if untreated as does any stomach born illnesses, you’ll get hungry, thirsty, cold, wet, tired and must manage fats, carbs, protein, and hydration and if that all sounds like a lot, it is…at least at first. 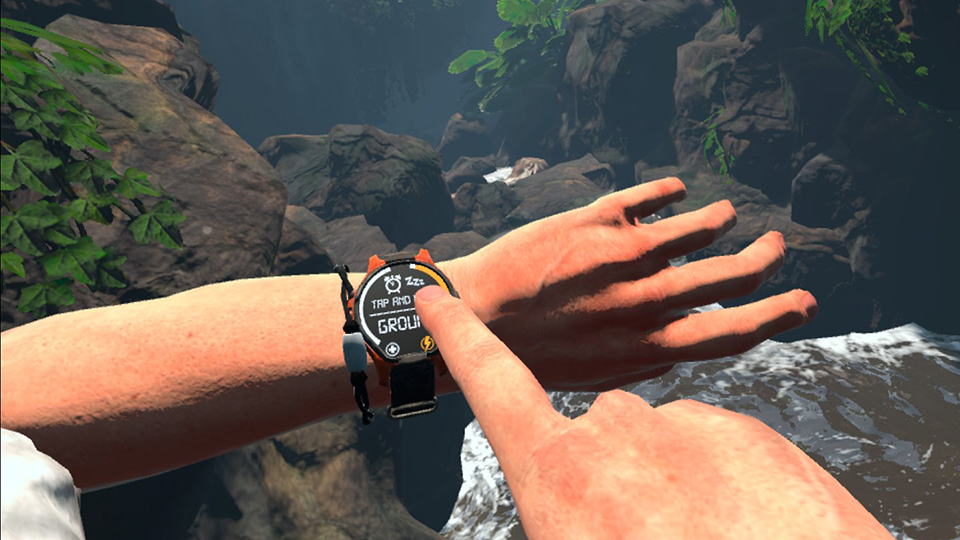 Pay attention to your watch…it’s a life saver!

After maybe 5 or 6 deaths, I began to get the lay of the land and focus on what the game was telling me to do and learning what not too.  Whenever you die, the game will tell you how you perished before restarting you at your last checkpoint and depending upon your discoveries from your last play, you won’t need to repeat taste tests as the journal stores all your previous discoveries.  You’ll still have to contend with the elements and even on the easiest settings, just because you have less to worry about, doesn’t mean there still isn’t challenge as finding and preparing safe food to eat and creating proper shelters are still arduous tasks.  Sleeping on the ground will have worms burrowing into your body, wading through water will result in leaches latching on to you, bug bites could get infected and with each of those ailments (and many more) are also the solutions to cure them which involve that trial-and-error gameplay that makes these games so addicting. 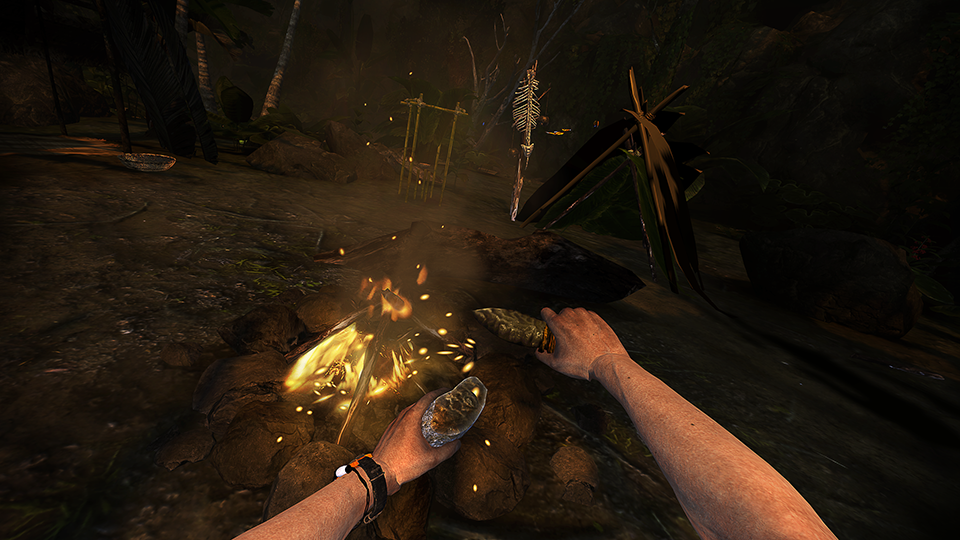 I was leery when they announced Green Hell for the Quest 2 headset as the game, on PC, contains an amazingly lush jungle environment that looks stunning at times.  I can say that I was never stunned by the visuals in this Quest 2 port, but at the same time, I was still impressed by (most) of what was on display before me.  The jungle still looks lush and while textures are on the simple side, the amount of foliage, trees and detritus on display is impressive.  I think what makes this most spectacular is the dynamic lighting attached to the day/night cycles which cast shadows on everything around and on you.  You can see your hands and arms, which is pivotal to your survival as afflictions and damages taken can be seen on your forearms and will need to be remedied. This is further accentuated by the nighttime lighting which is uncomfortably dark and even with a torch lighting my way, I soon realized that travelling by night is a big no-no as I lost my bearings quite easily.  Animals fly above you or scamper away as you approach them, disappearing into the jungle giving the forest some life while tall trees loom overhead, makeshift bridges may carry you over a stream and the foliage looks natural enough that special plants you need for a recipe don’t always stand out, forcing careful exploration of any area you find yourself in.  Unfortunately, the ground can look painfully flat and barren, textures and some animations look rough, and the character models look abysmal but overall, Green Hell offers a decent visual experience on the Quest 2. 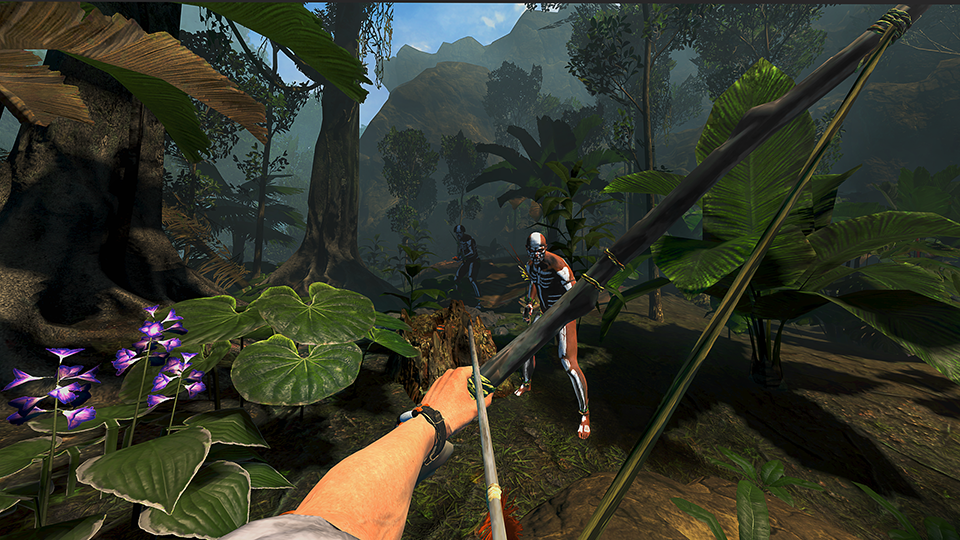 Fighting the locals is ALWAYS a bad time

Accompanying all that wonderful nature is some pretty decent spatial audio which, in a game like this, would be game breaking if that wasn’t here.  Hearing a stream nearby or the rattle of a snake can help guide your path and avoid some of the dangers the jungle provides.  The voice acting is on point and may come off as a little cheesy at times, but I never had a problem with the dialogue, despite the relatively predictable plot.  Music is kept to a minimum as the sounds of the jungle are your only company and the jungle never stops making noise with trees rustling, bugs buzzing, streams flowing, and all the other jungle sounds that make this feel claustrophobic and isolating at times. 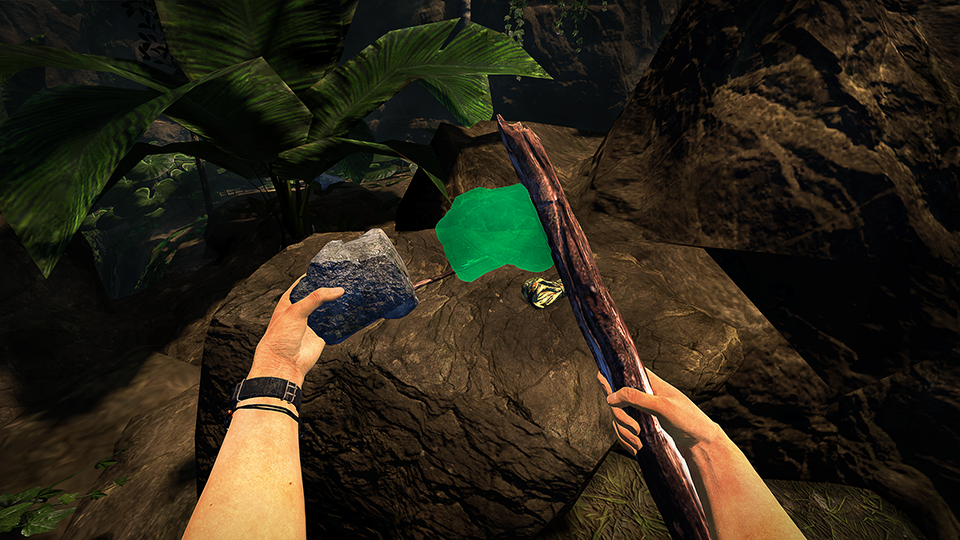 Crafting tools is fairly easy as long as you have the right stuff.

I fully admit to not having beat the campaign at the time of this review as I’m not a survival game type guy and this one feels more hardcore than most which I think the right kind of gamer will dig.  In no way am I having a bad time with this…in fact, quite the opposite but it’s a game design that just frustrates me and I need to take breaks as too not get to annoyed with the game or more accurately, my lack of patience with the genre. Every success is its own small victory as survival hinges upon every decision I made and when I made the right one, it’s so rewarding.  When I screwed up or did something wrong though, a long lingering death can be a painful outcome, especially when unintentional, ignorant screw-ups are the root of my demise.  My frustrations are compounded by smaller VR issues like grabbing items I didn’t intend too thanks to the mechanic of looking at something to pick it up instead of just grabbing it myself.  Items occasionally got stuck in geometry, animals would appear out of nowhere and dropped items would sometimes vanish forcing me to scavenge for more and when every trip into the wilds could spell disaster, that’s not cool.  Those problems are few and far between and for the most part, never really hampered me too much, but when they happened, they did annoy me. 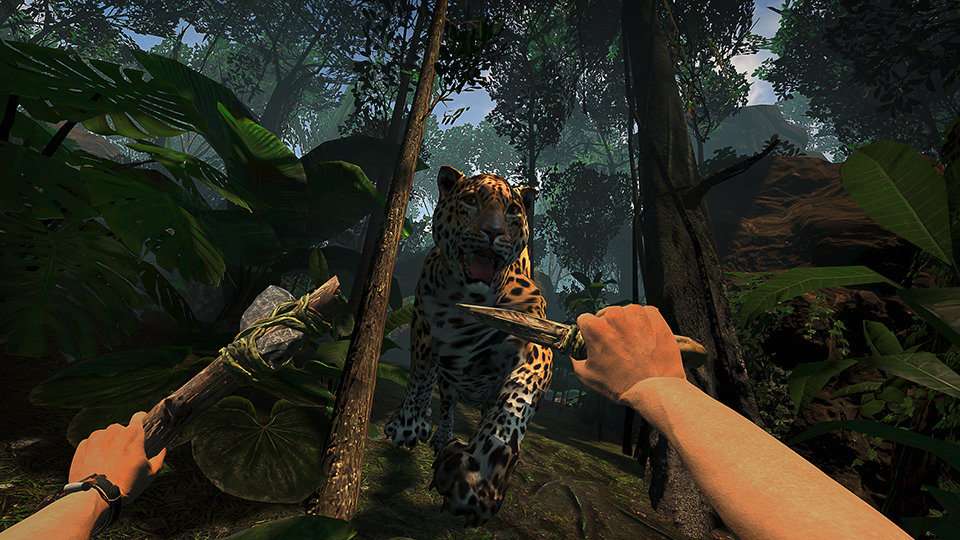 Panthers & Jaguars and Puma’s…oh my!

Green Hell is aptly named, and I think fans of the survival genre (specifically games like Song in the Smoke or The Forest) will eat this up as it is arguably the most realistic VR survival game available.  For those on the fence, the multiple difficulties allow just about anyone to dive in and let you play casually until you drum up the nerve to test those skills further.

What would I pay?  This is $30 US which I think is perfect for what’s here.  I’ve already spent more than a few hours in here and have been having a good time trying to survive in this harsh, lush world and with Survival mode available as well, there’s lots to get though.

INCUVO provided The VR Grid with a press code for this title and, regardless of this review, we thank them for that!