I fully admit to not having any clue as to what this franchise is about out other then scary animatronic creatures coming to life and you needing to survive the night with them…which, it turns out is pretty much exactly what the original game is about.  The closest I got to this franchise before VR was a one time attempt on a phone that I failed miserably on and never returned to.  Help Wanted is a collection of those previous smaller games all rolled into one “VR simulation” package and gives you a variety of scares as you play through a few different game types where you either survive or meet your end in recreated event from the first games taking place in Freddy Fazbear’s Pizza. 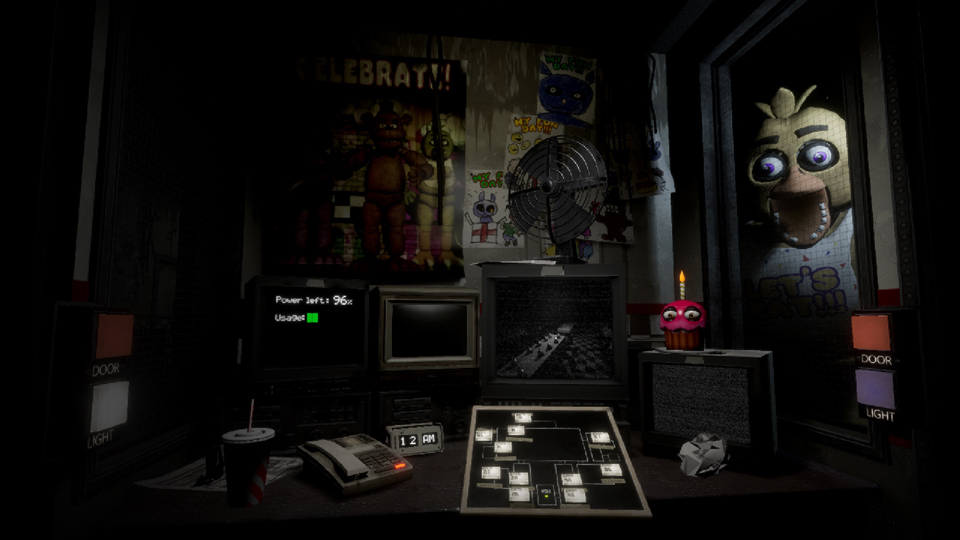 This dude seems to do this a lot

You can use a DS4 or Moves here and I highly recommend the former as the DS4 is tracked and requires you to reach the edges of the tracked area, at times causing loss of controller detection or button presses not triggering accurately, not to mention you lose the use of 2 hands as you now only have one controller to operate the equipment in front of you.  Contained in here are the first 4 FNaF games with each having 4 chapters to get through.  Getting through them is simple enough, just survive until 6AM and your done.  Each of these 4 games mixes up the action by requiring you to manage power for your doors and light, maintain music in a room, shine light on select rooms and a few more options.  The goal is to keep an eye on these animatronic monstrosities as they lurk the restaurant you are in, making sure to hide or avoid detection.  You watch them through the surveillance system, which in horribly unreliable giving you a small glimpse in a few rooms and constantly glitching out allowing you to easily lose sight of these robots which is all part of the fun. 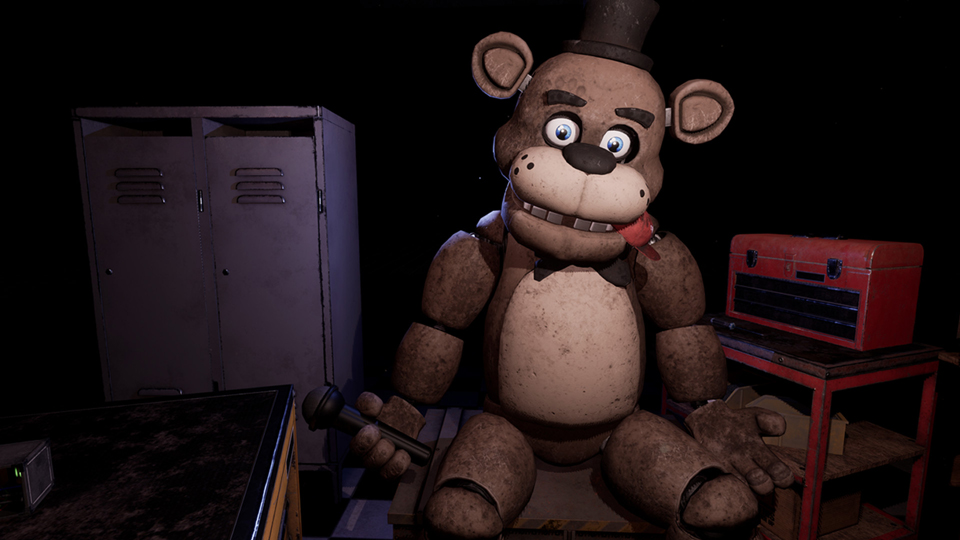 Maintenance is a stressful job.

Beyond the 4 games are a few others that require you to let a robot move around in the dark and you must shine a flashlight to freeze it in position.  They key here is you want the robot to be frozen on a specific spot in the room when a countdown timer hits zero.  Another mode has you maintaining the robots, who are right in front of you, requiring you to clean them and fix them without screwing up as one wrong move makes those robots very angry…like a twisted game of operation if you will.  The next one has you fixing vents in front of you and to the sides and requires button presses and lever pulls all while one of those creatures tries to move in and kill you.  The last involves teleporting from a few spots in an area, closing doors and shining lights to block the incoming robot from seeing you and taking you out.

As this is a collection of flat titles ported to VR from games as old as 5 years ago…Some of the visuals do look simple and dated.  Nothing in here looks inherently awful and making janky looking robots the villains allows me to forgive much of the jank in the 1st 2 chapters specifically.  As this is almost an entirely stationary affair, you rely very heavily on your cameras and surrounding controls and everything looks pretty decent in the headset.  Many stages have you in darkness using some form of temporary light to get glimpses into rooms on camera or nearby, possibly only giving you seconds to react to an encroaching robot.  Given just how limited each stage is, the singular setting gave me an almost claustrophobic feel as it seemed danger lurked around every corner which is exactly what this game is trying to do…unnerve you.  The animatronic robots look increasingly disturbing from 1 chapter to the next, especially when they are just standing in front of a camera staring right you, or even worse when they are closer than that. 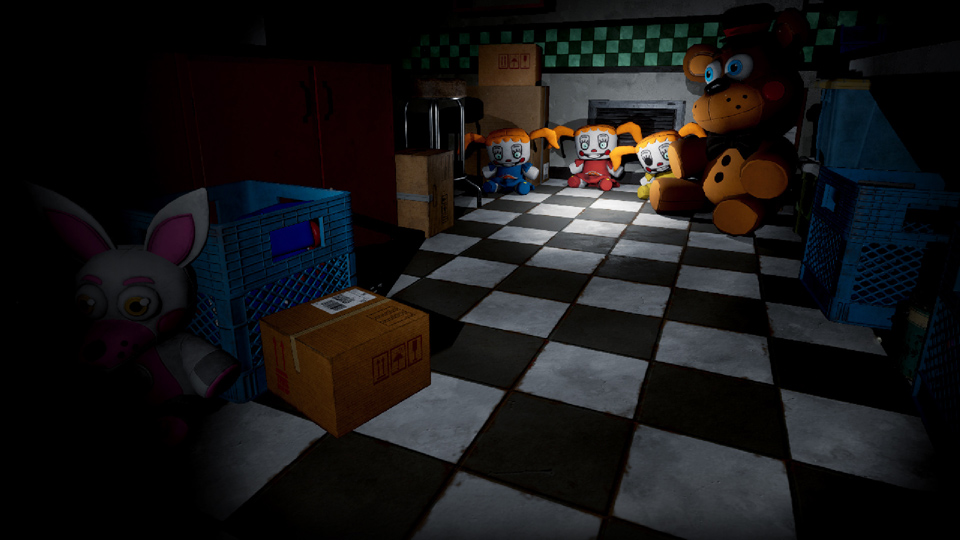 Why do they always come in threes?

Just as important as the visuals are, audio is also equally substantial in every game as the only indication that a robot is seconds away from you may be the sound of a banged vent or scuffling on the floor.  Each stage has you talking to your ‘boss’ who drones on and on about each stages goals and tools you can use to survive the night which can be helpful, but as it’s the same recording every time you start the game, I ended up ignoring the guy after not too long.  In other stages, specifically the maintenance level, he gives you specific instructions to follow so you need to pay attention to every word he says.  Music is subdued, but intense and jump scare sound effect accompany each attempt to spook you giving those moments a cinematic feel.

My largest complaint with Help Wanted is that when you start almost any game, it’s unclear what you are supposed to do which almost guarantees death on your first few runs.  The dude who talks on the phone does give helpful advice but leaves out critical stuff as well like that using doors in the first stage consumes power.  It’s not rocket-science and the games are simple once you get the hang of them, but I found that every time I died in those 1st few attempts, it’s because I had no clue what I was doing.  I’m assuming this is intentional just so you do die a few times, but it feels a little lazy to force that kind of failure upon the user.  Every successful night survived unlocks a collectible or you can find coins hidden in each stage to purchase additional ones though as far as I can tell they serve no purpose other then just being collectibles so if you  don’t care about that, you don’t have too.  Otherwise it’s just about scares and as cheap as they can be at times, there is a reason why jump scares are so fun to watch and those who may be more susceptible to freaking yourselves out will find plenty of opportunities to do so here. 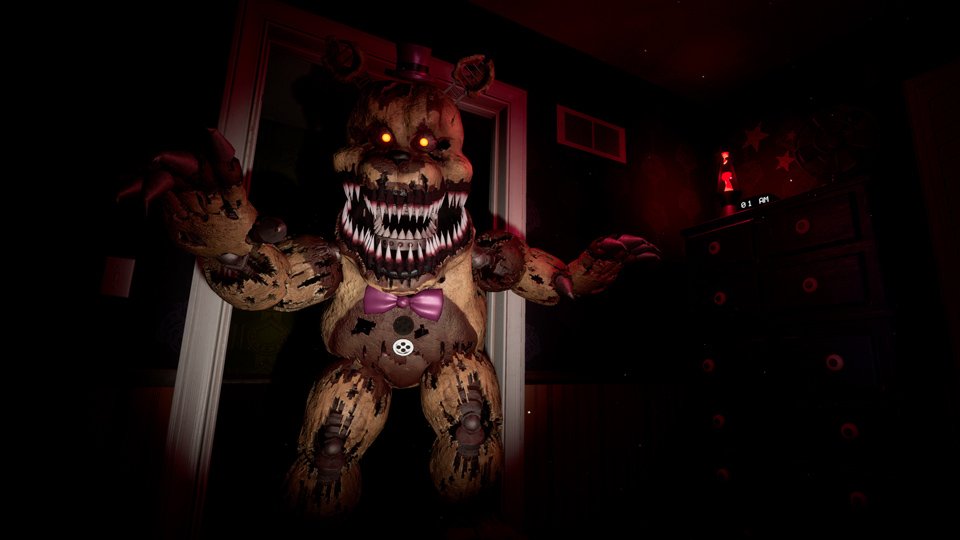 I mean, 2 sets of jagged teeth is a little excessive

Help Wanted delivers on an unofficial promise of porting classic titles to VR and however you feel about this franchise, putting it right in your face does make it better, if not scarier.  With that said, this is basically just a collection of previous titles so those who are already familiar with those games may find the gameplay here to be on the easier side.  Once I figured out what to do in any stage, it became very easy to repeat the steps to succeed leaving little reason to revisit conquered stages.  Unlockable harder modes spice things up a bit for those looking to spend extra time in the game If you want to a quick and hilarious way to scare yourself or  your friends in a headset, Five Nights at Freddy’s in VR is pretty much guaranteed to offer some solid spooks.

What would I pay?  This is $30US for a couple hours of fun at the most and while I do recommend this to demo VR, that price still seems a little high, capitalizing on the popularity of the franchise.  $20 seems more apt when compared to other ‘scare-loaded’ VR games and if you don’t like jump scares, it’s probably best to steer clear of this or at the very least see what the flat or mobile versions have to offer 1st.

Lionsgate provided The VR Grid with a press code for this title and, regardless of this review, we thank them for that!