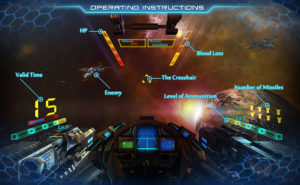 Cosmos Warfare is an on the rails shooter which has you helming a turret as waves of enemy ships try and take you out.  The game only requires headset controls and is about as simple as they come, you don’t even have to shoot as the game auto fires for you.  Just look where you want to shoot and that’s it.

You take part in 6 missions, each more repetitive than the last.  The AI here is minimal as wave formations repeat themselves by the end of the first mission.   The only thing that changes is the amount of enemies they throw at you, which never increases to any kind of dangerous level, so you’re left with a bare bones kind of experience.

Presentation is where this game shines as it looks great. The use of lower resolution 2D backgrounds to convey distance seems be a standard in most Gear VR games and this one is no different.  What makes it stand out though is you don’t notice the furthest background image but rather take in the “live” stuff around you; floating debris, rotating planets and fellow space ships help make this one the most visually impressive games I’ve played so far.  Audio is nothing to crazy, a 80’s action rock track plays throughout and explosions and lasers sound just fine.

With only 6 missions, and a replay mode for said missions, when I beat the game, I was done with it.  Taking only about 20 min of time though and it’s free price tag makes this easy to recommend, especially for novice users to VR.