VR is typically looked at as an isolating experience. 1 person donning 1 headset and venturing into an experience that typically centers around the character you are playing. The other side of VR that often goes unrecognized is the multiplayer aspect that let’s 1 player play with at least 1, often more, players possibly working on a grand adventure but just as often doing nothing of the sort, messing around and utilizing VR in some ridiculous ways…and that’s Spaceteam VR. In this homage to Star Trek inspired sci-fi, you play as a member of a crew of space farers who must keep the ship in proper operational order by reacting to specific instructions attached to the console in front of you and if you fail, your ship explodes. 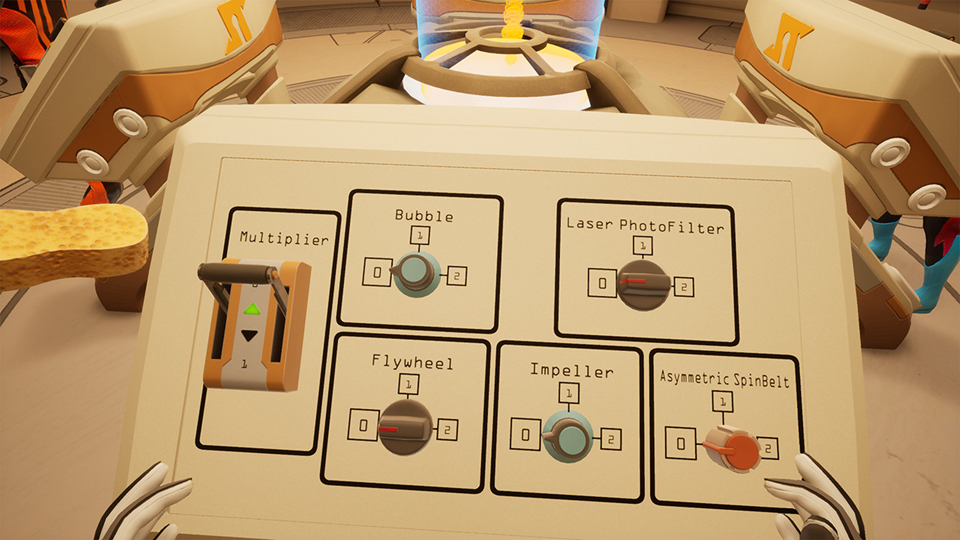 As far as I can tell, you never see the same console twice.

This basically behaves like Job Simulator, the space edition, with you having to pull levers, push buttons, repair consoles, shoot aliens, put out fires and a few other whacky situations that keep you on your toes. A screen in front of you instructs you on what to do next with a brief timer attached to each task which is easy enough. Activate the bay doors, trigger the harpoon canon, set the humidifier to 2 and so on and so forth. Where things get tricky is when you have to also respond to ally’s instruction that pertain to your console and vice versa where your on-screen instructions apply to someone else nearby. It’s a game ultimately designed to be played with others but you can play alone thanks to some AI robots that aid you on your journey, but to truly experience what Spaceteam is all about, this is best played with friends. The AI robots do a solid job of listing of instructions both aiding and hindering your efforts. Online play is the best way to enjoy this though should you want to share this experience with friends, they can install the Space Team app on their phone or tablet and join in on the fun though the interface here is much more limited with only your console being displayed on the screen. Whether you play locally or online though, it won’t take more then a few seconds before the yelling ensues as everyone tries to perform their own tasks while belting out orders at the same time. 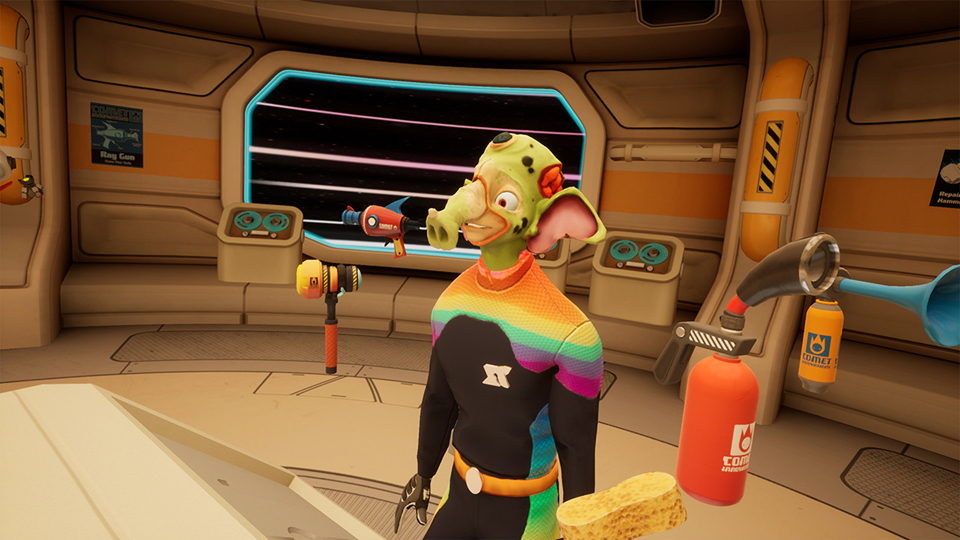 Spaceteam is a very simplistic looking game as you’ll be in the same ship in the same bridge with the only changeup being the space background you can see through nearby windows and the amount of consoles in the in room based upon how many players are in the game. That’s not to say it’s a dull game as the action gets so damned frenetic, you’ll be hard pressed to look at anything but the TV and console in front of you. At times though, you’ll have to look around as alien may invade your ship and cause excessive damage via laser fire or by covering your console in goop, rendering it useless until you clean it with a sponge. In front of you (and all the VR players) is a representation of your ship and the more you screw up, the more it falls into a liquid representing the danger your ship is in. Getting all the instructions right yields little chaos, but start screwing up and problems quickly compound as you have to constantly follow those instructions while doing any number of the additional tasks I mentioned above which turns this into chaotic fun. Everything in here is cartoonish and friendly looking and what’s great is that you can customize your avatar with a variety of options and have a full in-game body adding to the overall immersion. 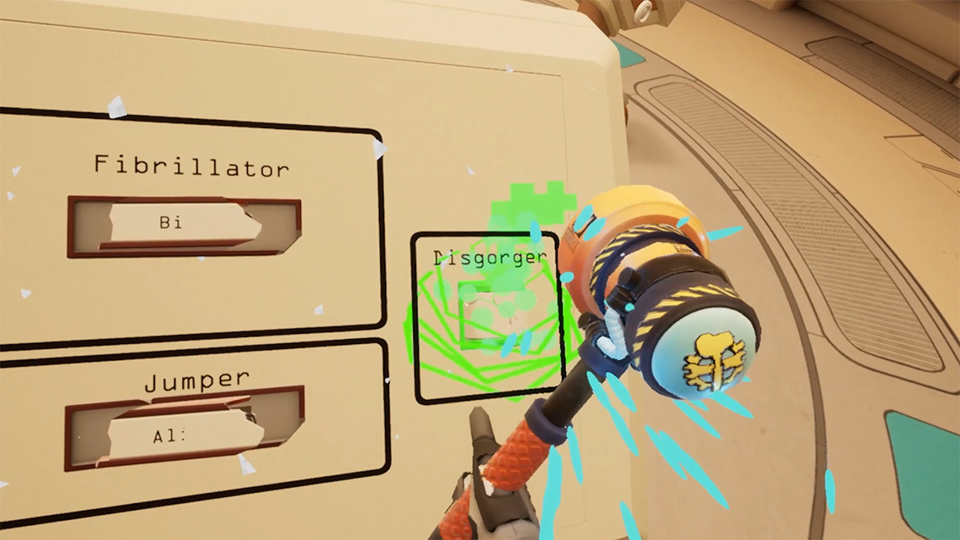 You’ll be doing this a lot!

Audio-wise there isn’t a ton going on beyond the cacophony of all the beeps, boops and other random effects of all the things happening around you. Playing with friends in or out of VR is almost a sure bet that the screaming of human voices will be at the forefront of everything else you hear. Playing solo gives you the same experience but swaps yelling humans for much more calm robots that speak in a digital manor.

Spaceteam is a riot and while every game plays largely the same, as long as you’re playing with friends, it really never gets old. The console in front of you switches every round and the technobabble used ensures that you can never memorize where anything is so the challenge is always present. Unfortunately, outside of the multiplayer, the game isn’t nearly as fun. You can play through each level of difficulty to practice with the game offering over 20 levels to play through, but it does get monotonous and dull, even though the challenge remains intact. Not the biggest deal but unless I organized a meetup with a friend online, over the course of a few weeks, I almost never found an online match and even if I hosted, no one ever joined. If you were able to combine local mobile play with the online portion, that could allow for some fuller lobbies but as it stands today that’s just not an option which is a shame as when you play with others, this experience is a blast! 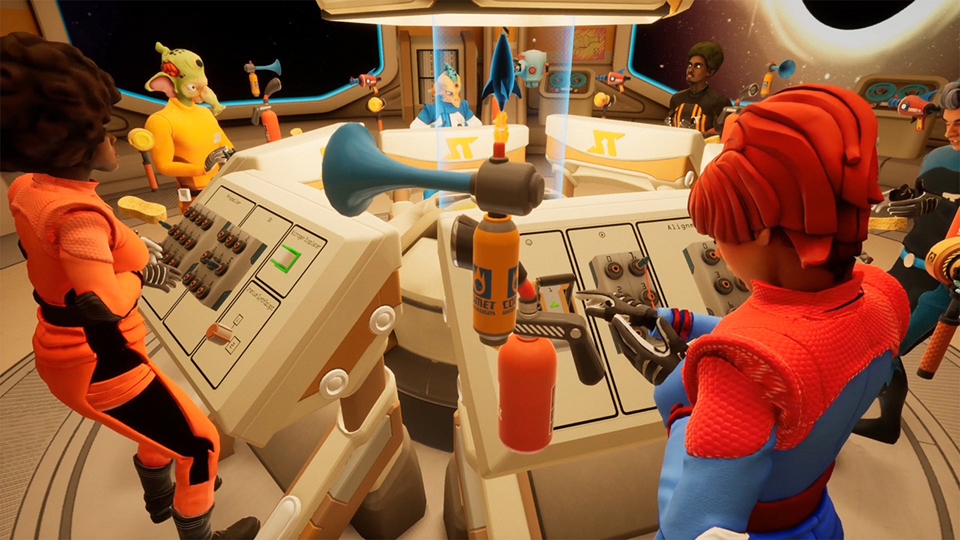 If you can get a party together, this is non-stop hilarity and fun!

Spaceteam is great fun for those people that are looking some fun teamwork type games in the vein of Werewolves Within or Star: Trek Bridge Crew. The lack of an active player-base hurts but as this is released on more headsets (PSVR is coming) the population could increase and if you are at all curious, maybe try and convince a friend or 2 to pick this up with you to ensure you can play this the way it’s meant to be played.

What would I pay?  This is $20 US and honestly worth it save for the fact that finding matches is more miss then hit.  Because of that, it’s hard to recommend for the full price though should this gain some traction, it’s definitely one to keep on your radar.  If it ever goes on sale and you think it’s something you might enjoy then I say definitely pick this up!

Cooperative Innovations provided The VR Grid with a press code for this title and, regardless of this review, we thank them for that!