A very polished Hack-and-Slash title whose missing features hinder long term enjoyment.  Downloaded from the Oculus store for a hefty $12, which wouldn’t be bad if you were given all the content of the full game…you aren’t.  Reading the description you see this message “Story Mode is excluded on this platform” which basically translates to having no rhyme or reason for what is going on and is kind of offensive considering the nature of the game.  Especially considering that this game has some pretty decent gameplay and visuals it’s a shame that the developers cut this content.  Containing 60 stages and some bonus content along with 2 characters that play through the campaign differently, there is a lot to offer, but the experience does get old pretty fast. 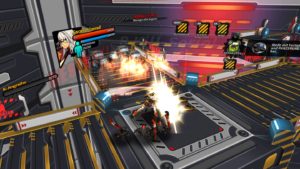 Anime style visuals abound in very crisp, clear presentation. This is definitely one the better looking games I’ve played on this platform.  The camera is relatively friendly with only the rare occasion where I was walking toward the camera and couldn’t see the approaching enemies before than they were on top of me.  Enemies differ as you progress further and further though the missions which is welcome as are the boss battles and environmental obstacles.  Audio fits with a few basic 80’s metal rock tracks and all the sounds fit well with the game.  I did run into the issue of the audio just quitting mid-level, forcing me to restart the game to fix it and this happened on more than 1 occasion.

As I said, this really is a great beat-em up game with the oh so typical button mashing mechanic which would get you through the most of the game.  Add in the different enemies and multiple powers you get along with the different abilities each of the 2 characters possess and there is a fair bit of fun and content to be had.  With that said though, the lack of a storied campaign hurts this game as does the genre itself as action, although solid, is still repetitive and that is magnified by the lack of purpose.  Add to that the high price tag and I can’t help but feel this game is more for die hard beat-em up fans than casual gamers.