So, if you like puzzles, brain teasers, conundrums and exploring the unknown then Obduction is probably your cup o’ tea!  The opening moments set up all you need to know with regards to plot for the purposes of this review.  You are wandering in a wooded area, greeted by a few flashes of light, something flies down from the sky and whisks you away.  To where?  Well not only am I not entirely clear on that myself, even if I did, I wouldn’t spoil it here!  I’m going to do my best to not ruin any plot content here, but there is a lot to talk about to bear with me as I try and keep this game as fresh for you as I can. 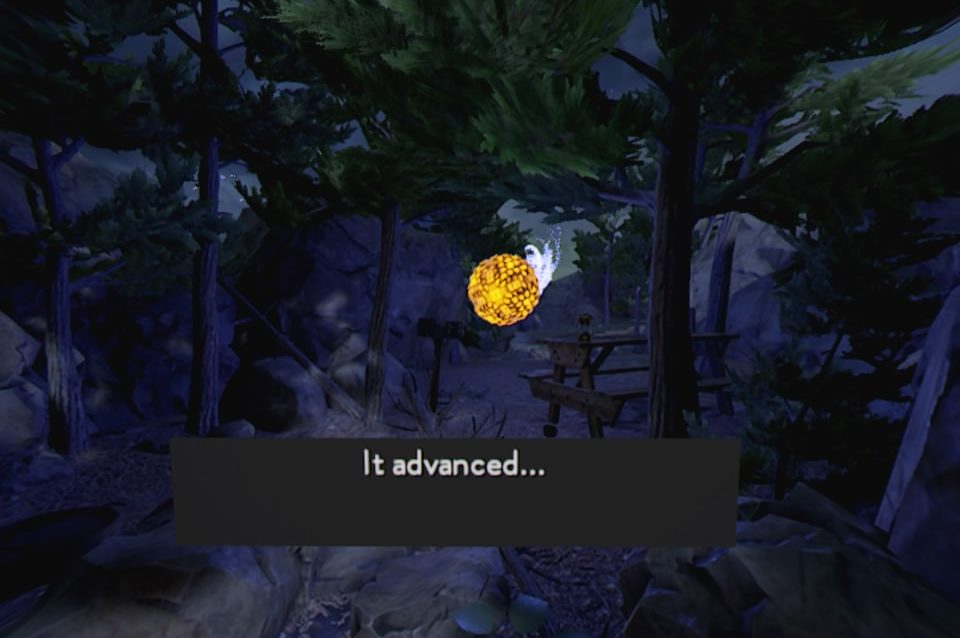 Out of VR, Obduction is great!  It plays like a traditional first-person exploration title with a very heavy emphasis on puzzle solving.  You are left to your own devices and need to figure out not only why you ended up in this strange world, but the events leading up to your arrival. The environments are fully realized, and the puzzles are some of the most complicated I have ever played through.  It’s engrossing and so satisfying when you figure out the next piece of this seemingly never-ending puzzle.  The campaign is supposed to take anywhere from 5 to 15 hours and unless you are using a guide or are some kind of genius, it’s going to take you way longer than 5 hours.

We saw Obduction arrive on the PS4 8 months ago and many have been waiting impatiently for the VR patch promised soon after the games launch.   Well, it’s here now and while the entire game is playable in or out of the headset I feel like most may be disappointed by what’s offered in VR.   Whether you use the DS4 or Move controllers, teleport and click-turning are the only options available.  I’m not a fan of constraining VR players to these limitations but considering that the flat version of this game has full freedom of movement, the lack of it in VR is glaring.  I could live with the limited movement scheme in VR, it’s not like I haven’t played a ton of similar titles but moving around the map may cause a quick load screen to pop up when you teleport, whether you travel far or short distances, doubling down on just how cumbersome movement is here. 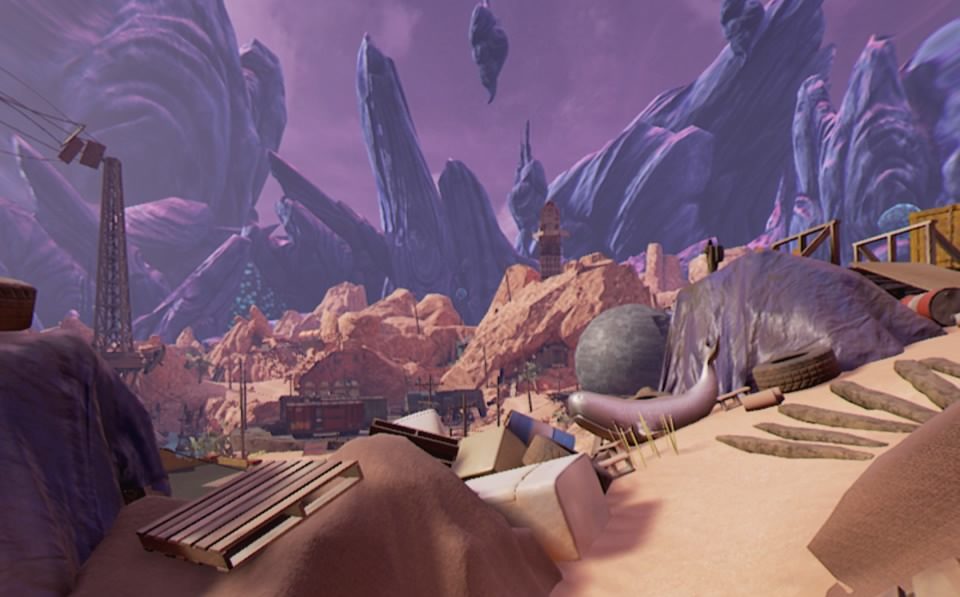 With either control method you get a tracked in-game hand (or 2) and can grab and interact with items scattered around the environment. It’s way easier to view items in VR thanks to being able to manipulate items with your hands.  You will be required to push and pull levers, press buttons, check out a host of objects and discover clues to solve whatever you are working on.  An important aspect to Obduction is driving the mine-cart with a mounted laser on it, which you need to drive around and solve puzzles, unfortunately when in the cart, blinders kick in, limiting your viewing area…a lot.  The blinders in Obduction are the most intrusive I have ever seen VR easily cutting off half the viewable area, if not more, even if the cart is at a stop.  The already low resolution gets reduced further when you enter the cart making these sections some of the most ugly I have ever seen In VR.

I can’t help but compare the crisp and clean non-VR visuals to the mess that lies behind the headset.  Almost everything in Obduction is a washed out hard to look at.  The game is loaded with detail and is one of the most beautiful games I have seen in recent memory…out of VR.  Unfortunately, none of the game looks optimised for the PSVR headset making close objects very blurry and further away ones just distant blobs.  Due to the teleportation at play, textures fade in before you as the game struggles to keep up with your movements and when combined with that pop-up loading screen, it just makes for a frustrating experience. 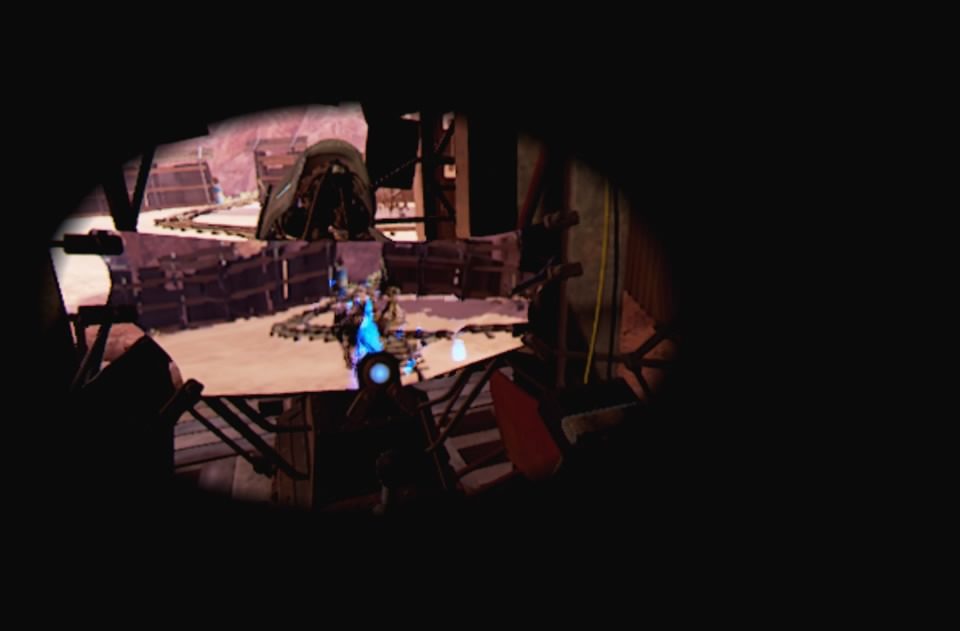 Check me out…I’m pretty much blind.

Make sure you have a pair of headphones if you do play because the 3D audio may be some of the best I have heard in awhile.  Ambient effects like wind, a flowing waterfall or trickling streams all sound amazing.  Silence pervades the game, but well-timed music hammers home the intensity of the situation you may be facing or adding an extra sense of elation as you discover a new area.  You’ll interact with some projections, which are real-world recordings of actors put in a 2D space, which I thought was a nice unique touch, and the actors in question do a great a job with their characters.

Obduction can be maddeningly frustrating at times as the solution to whatever you are trying to puzzle out may not be readily apparent.  I can’t count how many times I missed 1 teeny tiny thing that just stopped me in my tracks for way longer than I care to admit.  There is an option to turn on clue’s which just highlights objects you can interact with and for me, this option needed to be on all the time.  Solutions to some puzzles may come hours after you first stumble across them, while you have been busy dealing with other problems.  As the game progresses the difficulty only ramps up with later puzzles requiring even more thought out steps.  After about 5 hours of play, I ended up referring to a help guide to assist me in the game.  Most of the puzzles are ridiculously clever and so well thought out that Cyan, the developers, deserve a shout out for scope and scale of the many obstacles in the game.  However frustrating Obduction can be, it’s also insanely rewarding when you come to that ‘Eureka!’ moment all on your alone and unlock the next piece of the puzzle. 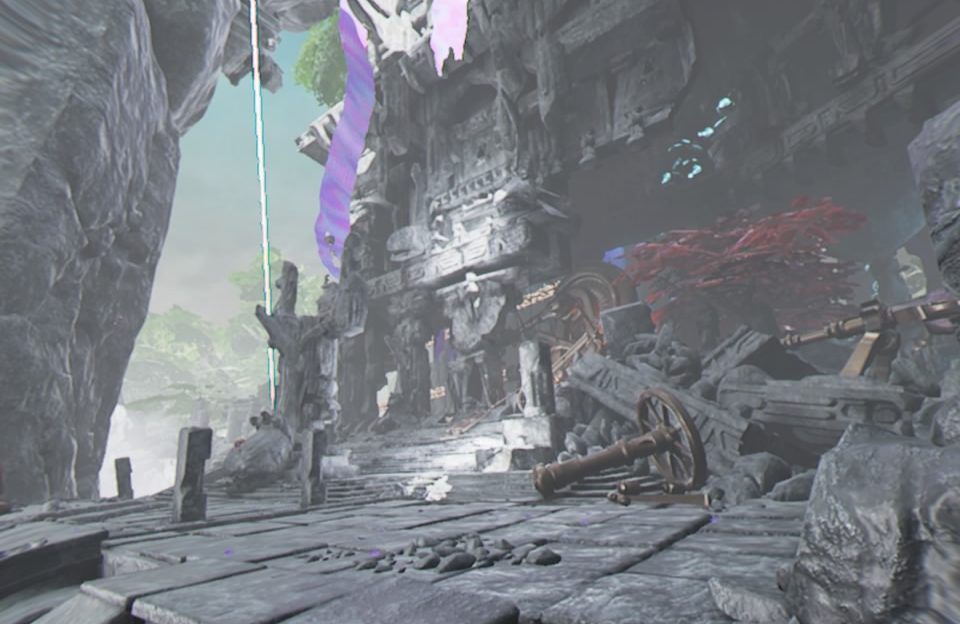 Trust me, the story here gets really strange…in a good way.

If you like games like Myst or Riven or even more recent exploration-based titles like ‘The Solus Project’ then I bet you’ll dig this too…out of VR.  I’d probably give Obduction an 8.0/10 or maybe even higher.  The level design is amazing, the story is intriguing, and the puzzles are probably the cleverest I have ever seen in any game.  With that said, the VR makeover really hurts Obduction, giving us cumbersome controls, unnecessarily large blinders and visuals so washed out that they are hard to look at.  Obduction currently plays better outside of the headset and while the devs have stated they are working on optimizing the game further, what’s available now is a hot mess.

What would I pay?  The $30 asking price for this is awesome, just don’t get it for VR.  If you only plan on playing Obduction in VR then you aren’t experiencing the full game, just a blurry VR port that ruins many of the best moments in the game.  Bottom line here is that Obduction is now fully playable in VR, but that’s more a statement of fact than a positive feature.

Cyan, Inc provided The VR Grid with a review code for this title and, regardless of this review, we thank them for that!